The network has covered five of the six CFP title games

The LSU Tigers have taken the nation by storm. Whether it’s the sensational play of Heisman Trophy winner Joe Burrow or the impeccable work of the LSU content team, the Bayou Bengals have garnered their share of fans. This year, SEC Network is back at the College Football Playoff National Championship Game for the fifth time, with onsite studio shows emanating from Jax Brewery, Champions Square at the Mercedes-Benz Superdome, and on the field.

“We have a field set, which is a standard five-person set, and seven cameras that are our own with a jib, a Steadicam, and a handheld on the field,” says Brian Hegner, supervising director, ESPN. “We also have two cameras up high, which really allow us to cover the warmups and the game the way we want to. We’re able to have it slanted to what we talk about instead of straight down the middle. In addition, we add 20 cameras from College GameDay and other shows.”

Away from Home: Nearly 20 Hours of Content Head Down to the Bayou

As Tigers faithful flock to the streets of New Orleans, the SEC Network and its lineup of programming are there to greet them at multiple locations. Before operations shifted a couple of blocks southeast to the Mercedes-Benz Superdome on Monday, Jax Brewery was the setting dedicated to a handful of shows. On Friday, SEC Now took over the premises with Dari Nowkhah, Greg McElroy, Gene Chizik, and Tim Tebow. On Sunday, the same gang was back for a special two-hour edition with Marcus Spears. Also on that day, Peter Burns took over host duties at Coaches’ Press Conferences. And making their CFP debut, Marty and McGee will be live from Jax Brewery on Monday. 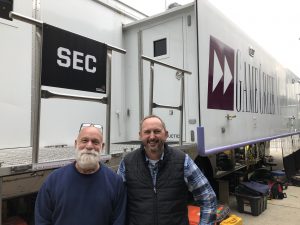 Joe Caricone (left) and Brian Hegner are leading the charge for the SEC Network in New Orleans.

In other areas in the Big Easy, SEC Now went to Media Day at the Xavier University Convocation Center with host Laura Rutledge, Marty Smith, Tebow, and Spears. When the festivities hit the Superdome, The Paul Finebaum Show will be live from Champions Square for three hours. Closer to game time, SEC Nation will be stationed inside on their on-field set with Rutledge, Tebow, Spears, Smith, and Finebaum.

Although a core of 20 SEC Nation staffers are onsite, SEC Network headquarters in Charlotte, NC, is once again playing a key role. Content is being produced from the studio in Charlotte, with a Saturday-afternoon airing of SEC Now with Alyssa Lang and college basketball analysts Daymeon Fishback and Andy Kennedy. Also, The Paul Finebaum Show on Friday was in Charlotte but integrated guests from the SEC Network set at Jax Brewery. On a technical perspective, Monday’s Paul Finebaum Show from Champions Square is being directed from Charlotte, with two of the three cameras controlled remotely.

Thanks to Nick Saban and the Alabama juggernaut, the SEC Network team has become accustomed to covering the CFP National Championship. Since creation of the College Football Playoff in 2015, SEC Network has been onsite for all but one (when then-No. 1 Crimson Tide lost to then-No. 4 Ohio State in the semifinal at the Sugar Bowl), and the crew has greatly enhanced coverage of some of the event’s minute details. For example, the SEC Network went from using two ENG cameras and two strands of fiber for Media Day coverage to a full-blown production with 17 feeds to Bristol and Charlotte from Game Creek’s Maverick. The same truck is in the compound of the Mercedes-Benz Superdome for operations there.

“When I look back, it’s not necessarily what we’re doing but how we’re doing it,” says Hegner. “We’re doing it with more firepower and more interaction with ESPN.”

2018 was a pivotal year for the SEC Network operation: both Alabama and the University of Georgia competed in the championship game at Mercedes-Benz Stadium in Atlanta.

“We really hit our stride in Atlanta,” Hegner recalls. “We had two teams in, and it was our biggest show we’ve ever done as far as coverage. We learned so much in that time, working with ESPN and all of those pieces, that we’re trying to replicate that each year. Now things are getting done faster, easier, and with less worries.” 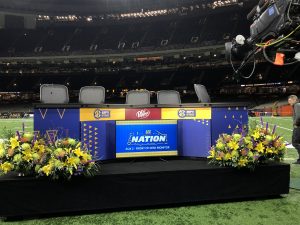 Prior to kickoff, SEC Nation will be produced from the field at the Mercedes-Benz Superdome.

Experience is not only helping their internal workflows but also helping a newcomer to the scene this year in the Big Easy. Also located at Jax Brewery, Media Day, and the Superdome is ESPN’s other conference platform, the ACC Network. With the final including ACC school Clemson, Hegner and his staff can share their wisdom to help a sister network find its footing.

“The cross-population is in the planning phases,” he says, “and how we’re executing everything this weekend. We’re both similar since we’re conference networks and utilize the same type of resources. What we’ve been trying to do is give them a plan that we’ve done for the past five years.”

A lot of the execution is rooted in talks between Hegner and his ACC counterpart, Kristy Higgins, supervising director, ESPN.

“She and I talk about how we’re going to put things together and make it all work,” he notes. “They have their own desires and wants for their production, but showing them how things may work at Media Day or how to set things up on the field. That’s where the interaction has been.”

It Just Means More: SEC Network Remains the Lifeblood of Diehard Fans
The SEC is anything and everything for fans dwelling in the southern part of the U.S. With another SEC school in the mix to be the best team in the nation, the passionate supporters will be out in full force. Joe Caricone, operations producer, ESPN, understands the sense of responsibility that the network has to produce quality programming.

“It’s a family-oriented endeavor,” he says. “I was at a restaurant this weekend and had an ESPN shirt on, and someone asked me about the shows; they were in New Orleans to just be here as alumni of LSU. We had a conversation about how important it is for people and the SEC and what it means. Most SEC fans really relate to our shows since we have a huge following. If you’re not always involved with what we do, you may not even realize how important it is. When we’re on location, we’ve become friends with people at recurring locations because they know us.”

As an extension of the SEC, the network is sticking to the roots that the conference embodies.

“I’ve been with the SEC Network from the beginning and have been on the SEC Nation show for six years since the beginning [in 2014],” says Caricone. “The word one that comes back around is tradition.”

With his upcoming retirement in March, he will work his final CFP National Championship in New Orleans. For him, there is no better way to end his time working on college football than with his SEC Network crew.

“It’s bittersweet for me because I always get to see people that I’ve known for 42 years in the business,” he says. “But, for us, this is our Super Bowl, and it’s handled that way. We’re super proud about the work that we do, and it means a lot to the people who are associated with the SEC.”