LSU and Clemson fans will be fired up ahead of Monday’s College Football Playoff National Championship Game. When they hit the interior of New Orleans’s Mercedes-Benz Superdome, they will be treated to a videoboard show that only college football’s biggest event can provide. Inside the relatively new control room, Van Wagner Sports and Entertainment (VWSE) and SMG, the production staff for the NFL’s Saints and NBA’s Pelicans, will rely heavily on updated video elements, such as a new control room and three-year-old, 333- x 38-ft. end-zone videoboards.

“Some of these videos that we will be running are multi-windowed and allow an immersive experience that we try to give the fans,” says Bob Becker, EVP, VWSE Productions. “We’re also mirroring what’s on the videoboards to the matrix and ribbon boards. In addition to sound, my job is to make it all cohesive and exciting.”

The Mercedes-Benz Superdome is one of the oldest stadiums in the NFL, listed at seventh out of the 31 facilities. Inside, the Superdome’s video infrastructure has caught up to the times. A control room constructed in 2014 and a pair of gargantuan videoboards installed in 2016 have improved the in-venue shows for both Saints and Pelicans fans. 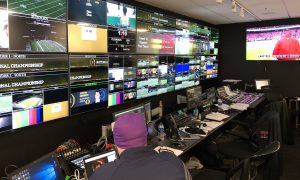 “A good portion of the control room was built five years ago for the New Orleans Pelicans since we do their in-venue production from here as well,” says Patrick Steadman, engineer, SMG. “We expanded the room when we added the new videoboards in the Superdome, as well as a few creative touches to make their show look more like something you would see on ESPN.”

Even after last year’s National Championship Game, which was played in a stadium that had opened in 2015 (Levi’s Stadium in Santa Clara, CA), the amenities within the aged Superdome are still ideal for Becker and his team.

“It’s an older venue, but the control room and videoboards are new,” he says. “The only old thing about the Superdome is the building itself. In my first Super Bowl [here], the videoboard was 4:3, and now it’s this huge feature.”

The videoboard and preexisting technologies will give fans a chance to be part of a pregame presentation before the title contenders take the field. It was implemented by VWSE and Cue Audio, which handles audio used in wide-scaled presentations.

“We picked the song and edited the video,” says Becker. “We sent the song to them, and they put the track down that triggers the phones. It’s a good mix in that we can still cut stuff that our guys put together, and it’s also interactive.”

A few weeks ago, the logistical elephant in the room was the potential for the Saints’ hosting a round of the NFL Playoffs. For an in-venue team that might have had to work back-to-back major events, SMG worked closely with VWSE and other partners to develop a contingency plan.

“One of the situations that we’ve been dealing with for the past number of months, since we started working with VWSE and the staff with the CFP in April, was the fear of possibly having an NFL game here on Sunday,” says Steadman. “We decided over the summer that the compound had to live remotely and by itself over in Lot 4.” 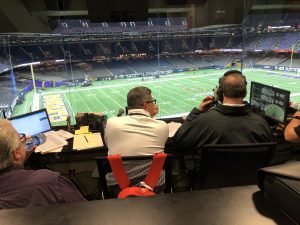 VWSE Productions’ Bob Becker and his staff run through a rehearsal of the show.

With the decision made and the entire production compound shifted to a different area, the normal occupied space looks a little different than how it would normally look.

“If you walk through the South Gate, you won’t see any trucks at all,” Steadman points out. “We had to leave the space open for Fox Sports if they had to come in.”

To bridge the gap, SMG and VWSE are using a communications system that VWSE brought in to keep in contact with the folks in the compound across the plaza.

A New Orleans Reunion: VWSE Works With Familiar Saints Crew
VWSE is an in-venue staple on almost every major U.S. sports event. With a CFP National Championship Game having a new venue every year, SMG and VWSE have frequently crossed paths, working together on high-profile games like Super Bowl XXXVI in 2002, Super Bowl XLVII in 2013, and NCAA Final Fours in 2003 and 2012.

Given this relationship, a majority of the equipment being used is owned by SMG. Aside from the communications system, the only other equipment that VWSE brought to New Orleans were the customary three editing systems. The preexisting gear that will be used comprises graphics by ChyronHego and replay anchored by Evertz DreamCatcher servers.

“We’ve worked with [VWSE] before on Super Bowls and on Final Fours, so they understand the operation,” says Steadman. “I was out in Santa Clara last year [for the CFP National Championship] and saw them work, so we have a pretty good idea on what we’re going to do. For this event, it closely parallels the New Orleans Saints’ show. There are some elements that we’re not using, but elements that CFP National Championship is using that the Saints don’t use, so it all evens out.”

Ultimately, the decision to go light was a consequence of the lack of preparation time that both teams have.

“We have only a week to prepare for this game,” says Becker. “You can only do so much from both technical and creative sides. You have to be smart about it. When we come early in the season to watch a Saints or Pelicans game [with SMG], we see what they have and adapt our show around it. If there ever was a situation where we really need to bring something else in, we will, but you don’t want to reinvent the wheel too much.”

Given a strong rapport with an experienced team and a technological toolbox topped by a new control room and videoboards, Becker wants to blend a basic in-venue production with engaging elements.

“It’s about the game and teams first and foremost,” he says. “But we will have some pretty cool stuff going on for fans at the game.”