During a championship run, a team’s internal creative and video-production staff are typically the unsung heroes. Sure, they capture special memories that last a lifetime or create a video that fans share in droves around the internet, but those creators usually float anonymously in the background. Boy, not with this LSU team. 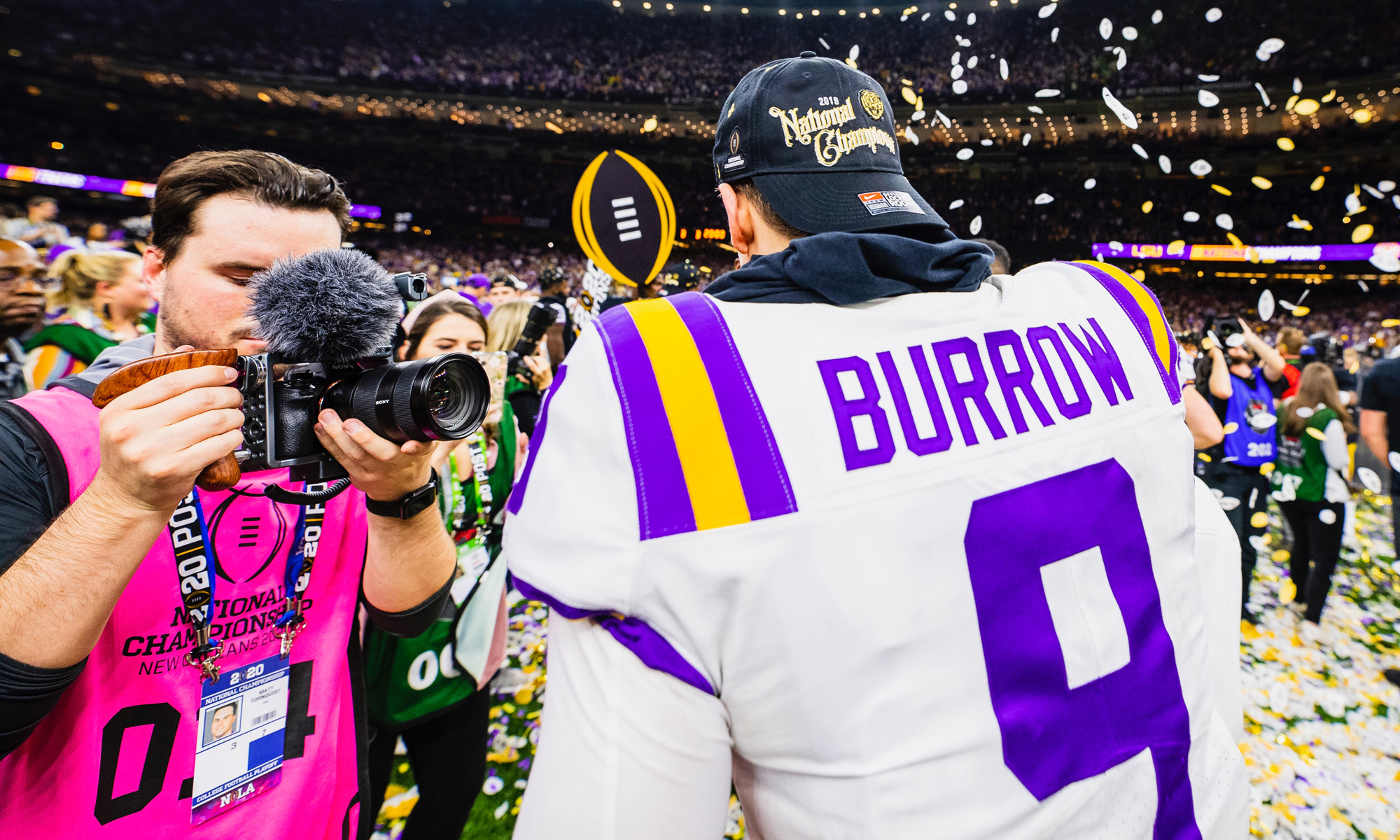 Over the past season, the spectacular video content being produced and distributed by LSU Creative has been just as much a part of the storyline of the Tigers’ title as Joe Burrow’s record-setting passing numbers or Coach Ed Orgeron’s magnetic personality (and legendary voice). Ok, maybe not quite as much, but you get the idea.

Whether it was the creative team’s trilogy of genre-redefining hype videos in advance of the College Football Playoff National Championship Game (which were edited by a student, by the way) or consistent feeding of its social accounts with gorgeous shortform all-access content, LSU’s social-video team delivered a special season for the school’s fans. And it didn’t go unnoticed by the national media: outlets from ESPN to Sports Illustrated and others wondered who was doing it and how?

“People are obsessed with these. It’s pretty unbelievable,” says Brandon Berrio, associate director, creative and digital content, LSU Athletics. “It’s something our fans enjoy. Some schools do one thing and do it really well. I’m proud of the fact that our team has found that.”

According to data released by Twitter on Jan. 11, the @LSUfootball account racked up a staggering 48 million video views and 265 million impressions on the social platform from September to December. And that’s before content came pouring out at and around the title game in New Orleans.

So how did Berrio and his team attack the Natty? With a handful of full-time shooters and editors paired up with some ultra-talented students tasked with providing an inside look at the game that fans have rarely experienced before.

The hype videos are the work of LSU student Will Stout. The junior started his LSU career as a freshman editing some hype videos for the school’s gymnastics team, and they quickly became his calling card. His work snagged the spotlight over the past couple of weeks as fans (and industry professionals) have fallen in love with his videos that accompanied the Tigers’ appearance in the Peach Bowl and then the CFP National Championship Game:

That’s Why I Know Where I’m Going… So Let’s GEAUX pic.twitter.com/qkBpXpp15q

Although Stout spent a lot of time editing, he did plenty of shooting as well, using both a Sony a7III mirrorless camera on a DJI Ronin-S gimbal and a Sony PXW-FS7 with a Sony FE 100-400mm f/4.5-5.6 GM OSS lens on a Hi Hat.

Not all motivational hype videos were for the public, either. LSU Assistant Director, Athletic Video, Jacob Brown was also creating content meant solely for the eyes of the players and coaches. He shot his footage with a Sony PXW-FS7 camera with a Sony FE 100-400mm f/4.5-5.6 GM OSS lens, all on a Hi Hat.

LSU has also excelled with short-form videos that spotlight the creative team’s shooting abilities. Matt Tornquist, coordinator of creative and digital content, was tasked with turning around quick edits (much like the shot of Joe Burrow smoking a postgame celebratory cigar that went viral). Tornquist primarily was shooting with a Sony a7III mirrorless camera paired with a series of lenses, including the Sony FE 24-70mm f2.8 zoom, a Sony FE 70-200mm f/2.8 GM OSS, and a Sony FE 2.0x teleconverter. He also used a DJI Ronin-S gimbal and a Hi Hat to assist on his shots.

Another key performer in those quick edits was LSU Video Coordinator Matt Karin. He produced the first piece of content that crossed over into the mainstream with his now iconic shot of Joe Burrow’s Senior Day entrance. At CFP, he also shot with a Sony a7III but worked largely with prime lenses, such as the Sony FE 24mm f/1.4 GM and the Sony FE 85mm f/1.4. He did also use the Sony FE 70-200mm f/2.8 GM OSS zoom lens and had a DJI Ronin-s gimbal of his own to go along with a monopod.

For LSU Creative, it wasn’t just about shortform social content. Production Specialist Caleb Thornton was responsible for producing any of LSU’s linear-television programming. He used a more video-specific camera in the Sony PXW-FS5, which is capable of shooting in 4K and high dynamic range. He paired that with both the Sony FE 24-70mm f/2.8 zoom lens and the Sony FE 70-200mm f/2.8 GM OSS lens.

Berrio played a critical role in balancing all this creative work. Hype videos could take Stout hours and hours to produce, but the squad kept fans appetites fed with loads of shortform content that set the scene and delivered a fresh, in-the-moment feel. 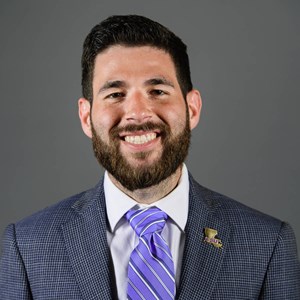 LSU’s Brandon Berrio: “Some schools do one thing and do it really well. I’m proud of the fact that our team has found that.”

One of the common misconceptions about LSU’s video performance over the past season is that the crew is working with a wealth of resources. Sure, it is blessed with some fantastic gear and a generous roster of talented individuals. However, virtually everyone on LSU’s creative team wears multiple hats. Tornquist, for example, produces social video for every program in the LSU athletics department, not just football. Karin was simply helping out on that Senior Day in Death Valley when he got the Joe Burrow entrance shot. His regular job is as LSU softball’s video coordinator.

In Berrio’s opinion, it all works because the team has identified what its members are good at, leaned into that, and set up an organized plan designed to spotlight content that aligned with their specialties.

Berrio also acknowledges that was something he learned by following LSU’s championship-game opponent over the years. Clemson’s social video has been the darling of digital video over the past few years, with the Tigers taking home two national football titles. But even Clemson’s creative team will tell you, it’s about planning, finding what you are good at, and going all in on that style of content.

“Clemson has been the gold standard,” says Berrio, an LSU alum in his third year as a full-timer in the athletic department. “All those guys are awesome. They’ve done incredible work, and their alumni base is pretty impressive. That’s what everyone in the country aspires to be. We want to get to that point.”

One may argue that Berrio and his team have established a new standard for what video content can be and do for an athletic program when the investments in creative video are made. In the meantime, though, LSU Creative is going to enjoy the thrill of having been part of a season that will go down as perhaps the most memorable that the city of Baton Rouge has ever enjoyed.

“We create videos on Twitter; it’s a dream job,” says Berrio, boarding the team bus headed to the Mercedes-Benz Superdome on the Sunday before the College Football Playoff National Championship Game. “We don’t have [anything] to do with the game, but, if we can bring a little extra to our fans and hype up the matchup as much as we can, that’s special.”