Mediapro and LaLiga presented the findings from the ‘Study of football consumption in public venues’, which finds that football is an activity boosting and income-generating for the hospitality sector, at the event attended by Jaume Roures, managing Partner of the Mediapro Group and Javier Tebas, LaLiga president. 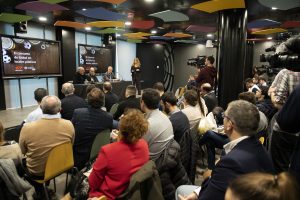 The principal findings from the survey show that football attracts more than 15 million fans to public venues every season, which in addition to the excitement of the competition, come in search of socializing and to share the atmosphere with friends. Venue goers are mostly young, very gender balanced, with similar behavior in rural and urban areas, and spend an average of 13 euros per person.

The major survey was carried out in bars and public venue throughout Spain and has served as a basis for analyzing football consumption in these establishments and to discover detailed and specific data about what it means for a bar to have LaLiga content.

Football is the king of sports in Spain, the most popular in bars, and the LaLiga is competition with the greatest number of followers. 15 million fans go to a bar at least once a season, 5.2 million regularly (at least once a month) and 2.6 million go every weekend to watch LaLiga matches at a public establishment.

As for viewer profiles, it is a mostly young audience, 55% are under 44 years old and in terms of gender equality in the 18-34 year-old segment the study shows how balanced the number is with 51% women and 49% men who watch football in public places.

Another characteristic fact detected by the Mediapro survey is that in bars soccer is enjoyed with friends. 75% of fans who go to these establishments to watch football, do so in the company of friends, and the average group size is of five people who come together to watch the matches. These groups spend an average of 2 hours and 20 minutes at the venue with an average consumption of 13 euros per person per game.

The study shows that fans who go to a bar seek the added value of the company and socialization. 53% of respondents highlighted socialization as the main attraction factor and 45% the atmosphere. 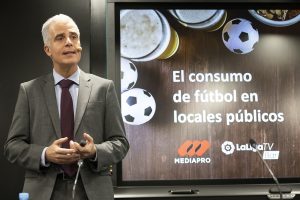 To continue protecting the premises who are legally compliant and suffer from unfair competition from pirate bars, LaLiga and Mediapro will continue to work with their Territorial Network of Content License Verifiers, made up of 100 experts distributed throughout Spain. This team is responsible for detecting audiovisual piracy in public establishments and filing the subsequent report with police and legal authorities.

They carry out more than 105,000 visits annually and have already reported over 5,000 premises, resulting in a multitude of police interventions all over Spain with the resulting hundreds of pirate decoders confiscated and initiation of legal proceedings.

Jaume Roures, managing partner of the Mediapro Group, said at the presentation ceremony “the challenge we’re facing is continuing to work together with the hospitality sector to make the product more and more attractive”.

“Although the numbers are very good and show that football is a dynamic activity in bars, we have to continue polishing this specific content for public establishments. It is our responsibility to give audiences the best product and protect them against pirate venues engaging in unfair competition by stealing football, ”added Javier Tebas, president of LaLiga.