Before Super Bowl LIV kicks off in Miami, the NFL’s best players of the season will head 223 miles north to Camping World Stadium in Orlando, FL, for the 2020 Pro Bowl. Covering the game for another year, ESPN will continue its push toward 8K technology with a Panasonic 8K camera at the 50-yard line.

“The Pro Bowl is a little more relaxed and laid back,” notes Steve Carter, senior operations manager, ESPN. “There are opportunities to test these types of technologies, and the NFL has been very receptive to that.” 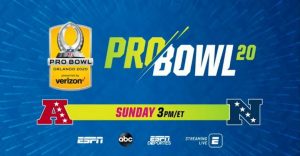 To stay ahead of the technological curve, ESPN is researching potential regular-season applications of 8K equipment. Although it’s only one camera, it packs a punch that can possibly enhance games on a more regular basis.

“The idea is to have four pan-and-scans in this one 8K frame, so we’ll be doing varying levels of electronic zoom and tracking the ball manually,” says Carter. “We’re looking at the technology to see the actual physics of the lens. It’s great to have the image in high resolution, but is it sharp and in focus? We just want to test the viability and feasibility of using a single camera for multiple camera feeds.”

ESPN is increasingly ambitious in exploring large-scale productions in higher-resolution formats. In the past few months, the broadcaster has embraced native 4K on regular-season college football, college basketball, and the CFP National Championship’s MegaCast.

ESPN’s farewell to the NFL season always comes with a tech-laden curtain call. The overall complement for the production comprises a total of 26 cameras. Besides the 8K camera that is garnering a majority of the attention (and rightfully so), specialty cameras include four of the super-slo-mo variety, and, in typical Monday Night Football fashion, a Skycam will provide aerial views at Camping World Stadium.

In what has become a Pro Bowl staple, offensive and defensive players and coaches on both teams will be miked. The audio captured will be used to enhance the viewers’ insight into what will happen next but will also provide a bit of creative freedom for ESPN to use the soundbite in other ways.

“We’ll be getting a feed of the play calls from offensive and defensive players to the trucks,” says Dustin Epstein, senior producer, remote operations, ESPN. “That way, we have a knowledge of the plays that are called, but we can also utilize that sound wherever it’s needed.”

In the compound, NEP’s EN1 will handle not only the game but also onsite studio programming. NFL Countdown with Suzy Kolber, Randy Moss, Adam Schefter, and Louis Riddick will once again reside in an on-field set, and the eight-camera show will receive REMI and GREMI (graphics remote integration) and other help from headquarters in Bristol, CT.

With onsite production of both the game and studio show, EN1’s A, B, C, D, and E units are being deployed. Used for ESPN’s weekly regular-season schedule on Monday nights, the mobile unit is accustomed to accommodating these two crews.

Across the Sea: Game Hits Homes in 94 Countries
The NFL Pro Bowl festivities will be aired on ESPN, ESPN Deportes, ABC, and Disney XD, but with the ever-increasing appeal of the sport around the globe, the network will once again push the exhibition contest to homes outside the continental U.S. 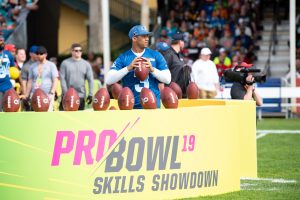 Through the help of ESPN International, more than 77 million homes in 94 countries will be able to witness the fun. Some of them are in areas close to the U.S. mainland: Canada, Latin America, and Brazil, for example. Others are farther away: European nations, like The Netherlands, Turkey, Greece, Malta, and Cyprus; nations closer to Asia, like the Philippines, New Zealand, Australia, and other Pacific Islands; and somewhere in between, like Sub-Saharan Africa.

The game will be showcased in five languages: English, Spanish, French, Dutch, and Portuguese. It will be called by the MNF crew of Joe Tessitore, Booger McFarland, reporter Lisa Salters, and officiating analyst John Parry. For the Spanish call, Ciro Procuna, analyst Pablo Viruega, and reporter John Sutcliffe will be onsite.

Tech Romper Room: Continued Innovation at Annual Showcase
Over the years, the NFL Pro Bowl has become a vehicle for the broadcaster’s technological adventures. For example, last year’s edition saw implementations usually reserved for the CFP National Championship game: Line-to-Gain Cam, PylonCam, and RefCam. ESPN credits the venue, which has hosted the game since 2017, and the league’s willingness to allow the experimentation.

“This stadium lends itself to being able to handle more in terms of workflows and [ample] workspace,” Epstein explains. “Since it’s not the conventional NFL stadium, the league is able to throw a little more [technology] on this game to test and see where some of these [deployments] end up.”