The 2020 Honda NHL All-Star Weekend wraps up tonight with the main event at the Enterprise Center in St. Louis: the 2020 NHL All-Star Game. And this year’s event, more than any ever, promises to have a lasting impact on the game, thanks to new technologies that have been rolled out. 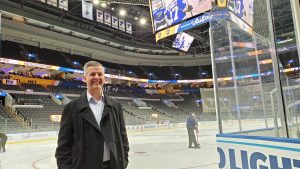 Production of tonight’s game will be handled by NBC Sports Group. According to James Stuart, senior director, operations, NBC Sports Group, the production team of more than 150 has had a chance to try some new things as it gets ready for the second half of the season.

“All the toys we have, the skills competition, and the guys on the ice definitely give everyone a little pep in their step,” he says. “We get to try new things.”

Topping the list of new toys are Digitally Enhanced Dasherboards and player and puck tracking. NBC Sports has housed those production teams in NEP’s NCP8 A and B units. The two technologies are designed to bring a new level of understanding to viewers at home. Produced via a partnership between the NHL and SportsMEDIA Technology (SMT), the tracking system generates up to 200 data points per second for each player and 2,000 data points per second for the puck.

Getting a chance to work with the two technologies this weekend is very important given that NHL Commissioner Gary Bettman has said that both will be up and running in the arenas of all 16 teams that make the playoffs this season and will also be in all NHL arenas for next season.

“Everything is so analytical these days. With player tracking, we were able to show that Mathew Barzal [who won the fastest-skater competition yesterday] was going 24 miles per hour,” says Stuart. “Viewers know what it is like to drive 24 mph, so it gives them more perspective about how fast he is going.”

The production of the Skills competition also saw the use of the JITACam and Freefly MōVI handheld camera rigs that allowed camera operators to skate around on the ice as the players took part in various competitions.

“The MōVI camera offers a perspective no one really gets to see otherwise,” says Stuart. “The best thing about All-Star Game is, the league is very open to ideas as it is an exhibition and showcase. It’s a great partnership with the NHL, and it’s a great two-way street.”

The Skills competition also added two events: the Elite Women’s 3-on-3 game between Canada and the U.S. and the Gatorade NHL Shooting Stars.

In the latter, players from both the men’s and women’s team took shots at targets from a platform 30 ft. above the ice. Think of it as TopGolf for hockey. From a production standpoint, the event added a new wrinkle to hockey: the need to follow a puck flying through the air like a golf ball. Helping in those efforts was the color of the pucks: orange.

“The main thing was a clean shot from behind the player to show the trajectory,” Stuart explains. “You can see the people on the platform so there was some stage-managing and having everybody off to the sides to get the shot we needed.”

NEP’s ND6 and ST28 are at the core of the weekend’s production efforts. The game production tonight will feature 51 cameras: 31 overseen by NBC and 20 feeds from Rogers and TVA Sports in Canada and the NHL Network. Among the cameras are eight super-slo-mos, a Steadicam, robotic cameras, and two netcams.

Stuart says a bonus this year is that St. Louis hosted the Stanley Cup finals last year (with the Blues winning the Cup) so the city and the Enterprise Center staff were familiar with a TV production’s rolling in with multiple production teams, rightsholders, and technical facilities.

“We lucked out the same way last year in San Jose, [which had] hosted the Stanley Cup Finals in 2016,” he says. “It makes setup a lot easier as we were able to park the trucks this past Tuesday and have Skills rehearsals on Thursday. Being here last year for Stanley Cup probably saved us a day.”