The league aims to enhance fan engagement on digital, gambling-related opportunities, and quality of play

NHL All-Star Weekend represented a major step toward a data-driven future for the league. The promise is new ways to engage with fans on digital platforms, a foundation for opportunities around legalized gambling, and even new coach and player new insights that can ultimately improve the quality of play.

That future was a big part of NHL Commissioner Gary Bettman’s press conference at the event.

“There will be more data than ever before,” he said. “I believe the players will generate something like 200 data points per second and the puck 2,000 data points a second. So, in terms of getting inside the game, telling stories as a fan, delving in to get what you’re interested in, you’re going to be able to do more things than ever before and even imagine.” 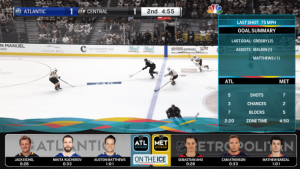 “The new system,” he said, “couples IR active-tracking technology with SportsMEDIA Technology’s [SMT’s] platform to generate X-, Y-, and Z-axis information related to the puck and players and then turn that data into statistics like possession, shots, passes, time in the defensive or offensive zone, time on ice, speed, distance, and more.”

The system comprises four main components: an IR tag that is placed on the shoulder of each player, IR cameras above the ice that shoot down and capture where those IR tags are on the ice, a puck that has holes in each side and emits an IR light, and SMT’s OASIS architecture, which converts the data points into usable statistics.

The process begins with the placement of the camera systems in the catwalk above the ice. At St. Louis’s Enterprise Center, which hosted the game this weekend, the system comprises 14 IR cameras.

“The number of cameras will be different for each arena,” Horstman explained. “It depends what kind of things are above the ice, like banners or columns, that can affect what angles we need to place the cameras to get what we need to get. We want to shoot down from above and then at different angles to get Z-axis information.”

Ready for the Playoffs

The NHL has tested the system in 14 arenas, and, by the second week of February, the hope is to have 24 arenas completed to have potential playoff teams covered by the time playoffs begin. By the beginning of next season, the system will be installed in every arena.

“There are four SMT install teams, with one doing site surveys and three doing the installs each week,” said Horstman. “The survey team has one more to do, and then that team will test out the new systems.”

The IR tags on each player are about the size of a stick of gum, with emitters on one side. The puck has six light tubes on the top and bottom.

“We’ve done extensive testing of the pucks,” Horstman added. “They are made by the same company that makes the regular puck, and the new ones are within the weight range and the same diameter. We’ve done tests where pucks have been hit at 130 mph, and so far so good.” 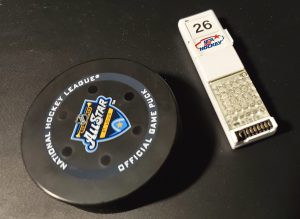 IR-beam technology is built into the puck, and players wear IR tags on their shoulders.

Once the system is fired up, the camera sees a black field, and then, when the tag lights up, the players and puck are visible. That is when the system begins to take information from one frame to the next and to the next to compute things like acceleration, distance, trajectory of the skater, and proximity of puck to skater.

This last, proximity of puck and skater, is an exciting development because it allows statistics concerning possession to be kept in hockey. The fast pace of possession changes has made tracking too difficult for manual operators.

Said Gerard Hall, founder/president/CEO, SMT, “With possession statistics, the league and broadcasters will be able to do analysis that has never been done before: things like possession time for each player and team, in what zone, and who is winning time of possession. We are excited about where this is all going to go.”

An exciting aspect of the project for SMT, Hall said, is that the company is providing an end-to-end solution built on its OASIS architecture. OASIS has three levels: Level Zero is the raw data and statistics; Level One adds time stamps and uses algorithms to determine specific events like pass, goal, time of possession; and Level Two is where that information is turned into graphics via SMT’s Optics Platform. Level Two is also where APIs exist so that data can be sent to third parties for such uses as gambling.

“The Optics platform will be provided to every broadcaster, so they don’t have to solve the problem of taking a firehose of data and figuring out how to visualize it,” said Hall. “It allows us to touch the natural production workflow properly. It’s a big plus for the NHL, and I applaud them because, instead of a connection with a bunch of electrons, rightsholders are getting tools to integrate into their production.”

During All-Star Weekend, those graphics included a gray trail making the puck easier to follow; a circle under the player who has the puck; and name tags under players on the ice, showing time on the ice or speed.

“It can even do lineup dropdowns to scorebars and a commentator information screen [displaying] statistics like possession,” said Hall. “The Optics platform also feeds into ChyronHego, Vizrt, and other graphics devices.”

The key is SMT’s AI Engine, which can automate manual data entry so that replays can make it to air more quickly.

“The data feeds automatically generate multiple replay scenarios with fonted graphics,” Hall added. “The replay operator can hit a single button and have a replay with fonts and a tail on the puck. With the speed of hockey, that is important.”

What’s Next
With the playoffs starting in a couple of months, the goal is to make sure everything is in place for those efforts. For the playoffs, two OASIS systems will be installed in each arena: one for NBC Sports and one for Rogers (next year, those systems will be for the home and away broadcasters).

“With each having their own systems,” Horstman noted, “Rogers can put speed in kilometers while NBC can use miles.”

With respect to gambling, the NHL has three partners: MGM, FanDuel, and William Hill. Only MGM, though, has access to the data built into its current deal with the league.

Although the league is happy with the active tracking that IR provides, there is also a desire to add optical tracking so that limbs and sticks can also be analyzed.

“We will be looking to other machine-learning systems,” said Horstman.

NHL Deputy Commissioner Billy Daly sees the evolution of puck and player tracking heading in one direction: more and better: “A lot of the ideas that are going to come along are going to be the result of what we see with what we get. I think it’ll be evolutionary. What we end up with in the playoffs will look different from what we get in the next regular season.”