As part of their partnership, Verizon and the NFL have jointly developed applications that will come to life for fans at Hard Rock Stadium within the NFL OnePass app. All fans using the NFL OnePass app will be able to take advantage of AR overlays of big plays, stats, and other moments of the game. Many app features will be available to all game attendees across 4G networks, including new features such as in-stadium wayfinding and augmented reality (AR) experiences. 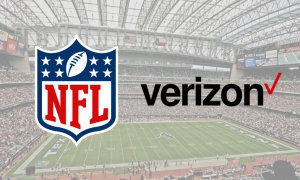 Additionally and exclusively for Verizon 5G Ultra Wideband customers attending the game, the application also offers a new multi-camera angle streaming feature. Using this feature, fans will be able to choose which stream they want to watch to get the best angle of the action on the field, switch between camera angles, and rewind and play instant replays.

The NFL OnePass app is a great resource for fans attending the Super Bowl. It brings fans specialized content in a user interface specifically developed for the game. The multi-camera, live stream of the action on the field is the first consumer app specifically designed for fans with a Verizon 5G Ultra Wideband compatible device. Verizon 5G Ultra Wideband service is available in parts of Hard Rock Stadium. Verizon Media’s RYOT and Visual-Intelligence developed the AR experience within the NFL OnePass app that enables fans to view the first near real-time AR stats. These NFL OnePass app features provide fans an enhanced experience only available within the stadium.

The NFL OnePass app gives fans the ultimate experience at Super Bowl LIV events throughout the week in Miami. In addition to the Verizon-built features for fans in the stadium, the app includes the full schedule of events, appearances, maps, and a chance to win prizes including tickets to Super Bowl LIV. Fans can use the app to gain exclusive access and opportunities at official NFL events all year long by downloading the app prior to the NFL event or signing up at the event.