Digital Video Group (DVG) recently installed and commissioned a Calrec Brio 12 digital broadcast audio console as part of a brand-new broadcast studio project for NBC Virginia affiliate, WSLS. The Brio was selected by WSLS and DVG for its powerful and comprehensive feature set and audio quality. 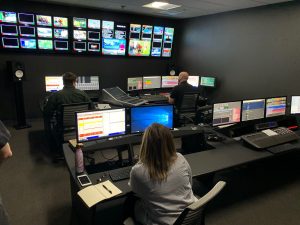 “We typically spec Calrec for our high-end installations because the company offers great support as well as quality equipment,” says Alex Martin, CEO, Digital Video Group. “We went with the Calrec Brio 12 because we knew it would act as a bridge between the studio’s analog equipment and digital gear. Since the system and the production control room are automated, a large traditional audio mixer wasn’t required for this project.”

While the focus was on automation, the Brio gives the studio a physical interface where users can manually operate it, if required. The fact that the Brio can use both MADI and Dante was also an important capability for the WSLS project. Installing the Calrec console, using multi-channel digital audio with a Ross router, expedited setup and required less than six cables, where it was once necessary to use dozens.

The smaller format Brio not only fit the bill from a technological requirement, but from a financial perspective as well. “The Brio reduced the overall integration expense while still providing a very sophisticated, yet simple, technical interface,” says Chuck Heffner, VP Broadcast Systems, Digital Video Group. “DVG completed the project on time and on budget. WSLS went on-air without a hitch.” 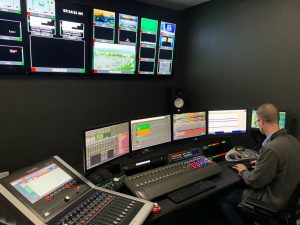 “We’re always excited to be at the forefront of state-of-the-art studio applications, and to have a network of integrators behind us who spec our equipment,” says Rob Lewis, national technical sales manager, Calrec Audio. “The team at Digital Video Group has long been a supporter of Calrec technology and we’re pleased that they’ve chosen the Brio 12 for the new WSLS facility.”