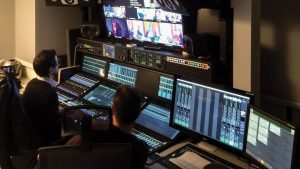 Alongside the System T V2.3 release, the Network I/O V4.0 update includes ST 2110, ST 2059-2 and ST 2022-7 support for all devices, providing standards based AoIP and Dante technology simultaneously on the same chipsets. This allows installations to leverage IP networks for both infrastructure and consoles-based audio routing workflows, without proprietary hardware TDM routers, and adds support for TSL UMDv5 providing the audio operator with accurate information about the source currently presented on each fader.

An additional tone inject on the channel input provides simple signal path checking, while a new per path talkback inject for channel and bus direct outputs enhances communications switching and conferencing. A Backfeed feature with mix minus assignment places the controls of a Mix Minus return bus directly on the incoming outside source channel. Greatly simplifying operation for complex external line control, without the need to navigate to other layers or other systems. Cue and Auto Cue further simplify communication with outside and remote sources, greatly reducing the console operator’s tasks during broadcasts with complex remote feeds.

Support for Network I/O Dante HC SRC, plus SB 32.24 and SB 16.12 SRC capability has been added to facilitate mixed sample rate or separate clock domain use. Scenarios that requires audio sharing, without exposing networks to either team can be achieved directly on the stage boxes or across a high capacity 256 channel bridge.

A graphical FFT analyzer overlay is now available on the channel and bus, EQ and Filters GUI. Allowing an engineer to quickly identify problem frequencies, from within the tools they would use to resolve them. The fixed-point-per-octave analyzer has equal resolution across the entire frequency range, providing high resolution even at low frequencies. The FX rack instance of FFT analyzer gains a spectrogram view, graphically showing frequency content over time as a heat map.

V2.3 brings further additions and updates to the onboard FX rack. A Matrix Mixer summing and level control for all formats from stereo to 7.1.4, plus 4, 8 and 12 wide versions. This flexible FX utility can be used for downmixing, level based up mixing, submixing and PA matrix mixing. As an FX rack module, no processing power is taken from the channel and bus processing capabilities. The Dynamic EQ module benefits from a full graphical redesign and additional functionality including per band threshold trigger function.

T-SOLSA provides System T control software for standalone computers or virtualized servers. T-SOLSA is designed for use as an active remote-control, a training tool, or an offline setup application. Multiple GUI apps can be shown across multiple screens, V2.3 adds full-screen mode for each app allowing large engineering “dashboard” capabilities, or feeds into multiviewers for overview and FX rack metering.