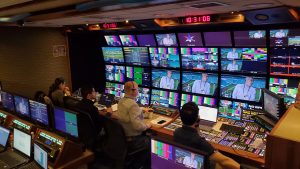 ESPN’s technical team for the International show numbers about 30. It taps into NEP’s Super B which is where multiple feeds from Fox Sports and NFL Network are available for request.

“We are sent a clean feed which most of the broadcasters don’t get and we also have our own hard camera at the 25-yard line in case we need to cut away from an element during the show,” says Orton.

ESPN has three booths: one for the pre-game where a three-hour show is done; and second for the game itself; and then a third which is used by ESPN Australia for both pre-game and game needs. ESPN Australia also cuts its own show on a smaller production switcher in the EN2 B unit.

“ESPN Brazil is also here, and they have separate commentary desk positions and we add commentary audio to their feed which is sent by satellite to ESPN in Bristol and then down to Brazil,” adds Orton.

Despite the larger production facilities Orton says the truck is almost maxed out given the multiple shows that are being done.

Key to the efforts is the cabling work done by the NFL in the days prior to the event.

“They take care of all the cabling in the stadium and it’s the only way this can work,” says Orton. “We start working on this in September and give them our requests and then in early December wrap up everything we are going to do.”