With emphasis on instant stats, the goal is new ways of fan engagement

Fox Sports is rolling out a new graphics look for tonight’s big game, and, according to Zac Fields, SVP, graphics technology and integration, Fox Sports, it is only one of the new elements that will engage viewers in new ways. Along with the new look will be new information.

The new graphics package has been months in the making and will be carried over to the XFL, which debuts next week.

“It’s a whole new animation package, and everything is brand new with an emphasis on color,” says Fields. “It’s a little more bold than the last package.” 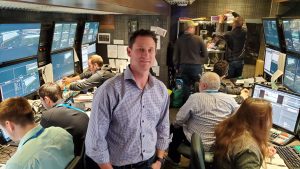 “The illustrations are for guys who are stars, and we wanted to emphasize that,” says Fields. “Some of the players also have multiple illustrations.”

Augmented reality (AR) will have an improved presence tonight, thanks to work the Fox Sports team has put into creating plugins and software that rides on the Unreal Engine 3D game platform, along with advances from SMT.

“SMT has continued to develop optical-based camera tracking for the Skycam,” says Fields. “Now it can link with Unreal, and we can pair SMT’s tracking data, which they do really well, with a high-performance render engine. We did some tests in New Orleans, and it was really promising.”

AR will be tied to the lower of the two Skycams deployed as well as a robotic camera on the goalpost.

“We will do a ton of AR in the pregame,” he adds, “and we are also going to do some cool things with the title card as well as throughout the game.”

Fields notes that other events that make use of SMT’s optical tracking, like NASCAR and MLB, will also benefit from the SMT marriage to an Unreal Engine.

“Camera calibration has always been the thing that stops you,” he says. “With this, we will have new ways to tell stories. The challenge for us is to continue to develop it.”