Super Bowl LIV features a super presence by Game Creek Video, with 19 trucks and 45 technicians on hand to support Fox Sports, NFL Network, and ESPN. And, when it comes to the production of the Big Game itself, Game Creek Video is front and center with 10 trucks supporting the Fox Sports efforts at Hard Rock Stadium. 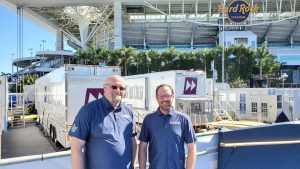 “The game coverage will be produced out of Encore A, B, and C with support out of Edit 4 for things like audio submix, 4K, mixed reality, and pylon shading,” says George Bailie, engineering manager, Game Creek Video. “Cleatus A and B will handle the pregame show while Edit 2 will support the pregame, pregame audio submix, 8K, and vendor support. Bravo will do the kickoff show and also be our primary backup to Encore, and B5, which was at Opening Night earlier in the week, has now joined the mix onsite.”

Getting the core trucks in place took a lot of travel, especially because the NFC Championship Game was in San Jose, CA, just two Sundays ago.

“It was almost the last place you would want that game to be played, given the need to get here, and it resulted in an abbreviated setup schedule here,” says Bailie. “But a massive number of drivers moved Encore, Cleatus, Edit 2 from the West Coast to here in 60 hours. Not enough credit can be given to that side of the effort.” 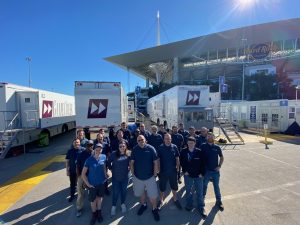 Game Creek Video’s Super Bowl Sunday team at the stadium ensured the Fox Sports production went off without a hitch.

One challenge in the setup was that there are three compounds: one right next to the stadium, where Encore and Bravo A are located; a second compound, where the remainder of Fox’s trucks and trailers are located; and a third, international compound (Game Creek’s Gridiron is there to support ESPN’s domestic efforts on Super Bowl Sunday).

The result is what Bailie believes is more miles of fiber transport in a footprint this size than anything that has ever done. “It’s not just the cameras but the data and audio. Even truck-to-truck muxes had to be broken out so they could be shipped across the street, and that’s a heavy lift.”

Super Bowl LIV is giving Game Creek Video the opportunity to bring three generations of facilities — SDI-based, hybrid SDI and IP, and all-IP — together for the biggest event of the year.

“Encore was our first IP truck for Fox Sports [and has an Evertz router], and Bravo is the first IP truck that uses a [Lawo/Arista] IP router,” says Brian Nupnau, engineering manager, Game Creek Video. “They all have the same design concept, so they tie together very well. And the networking infrastructure that we have is the same from truck to truck.”

With respect to the 1080p HDR production, Bailie says the Game Creek Video team was fortunate to have a season of Thursday Night Football so that Encore and the engineering team are well-versed in the differences.

“The production progressed through the year, and we had a lot of time to fine-tune things,” says Bailie. “Anything that originates in Encore is native HDR, and we have 100 channels of AJA FS-HDR in Encore to handle SDR conversion. The biggest challenge was the 3G workflow.”

The regular-season workflow did need to be tweaked for the Super Bowl, given that the international broadcasters and others are making use of the camera and audio signals being gathered by Fox Sports.

“We spent a lot of time having to fine-tune the actual tags on the signals to pass HDR,” says Bailie. “So there are a lot of things that need to be considered beyond the colorimetry, because here we are sending signals to the outside world.” 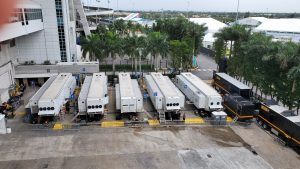 Game Creek Video Encore and Bravo A are located in a separate compound area near the Hard Rock Stadium.

The outside world connects to the domestic efforts via the FATS (Feed Another Truck Something) cabin in the center of the domestic compound. The cabin has a massive Evertz EQX router that is maxed out and, ultimately serves out audio, video, and data signals to all the entities onsite.

“We also have a highly utilized Evertz EXE router in Encore, and the two Evertz EQX routers in Peacock are almost completely maxed out,” says Bailie. “It’s an absurd number of crosspoints.”

The Game Creek facilities across the board are running on 3-Gbps infrastructure, a key part of enabling the 1080p HDR efforts. Even the consumer monitors used on sets are 3G-capable.

The scale of the 1080p HDR Super Bowl show required additional gear to be brought in. For example, a single EVS XT-VIA network with 29 replay servers (believed to be the largest ever) had to be tested and, ultimately, deployed for the production.

“We needed to find all of the EVS XT-VIA replay servers, all of the Sony HDC-5500 cameras we could find, and that was a huge challenge to pull off,” says Bailie. “It has been nothing short of amazing.”

Lawo/Arista and Evertz are the two main core routing/switching systems that Game Creek is using. When the newer SMPTE ST 2110-based trucks were built featuring Lawo routers and Arista switches, it was important to ensure that they could connect without compromise to the Evertz-based trucks.

“We were able to layer in a way that everything presents itself the way everyone is used to,” says Bailey. “And, with all of these different players in the mix, timing is still the big issue, and it is crucial. With things like different offsets for different systems, [we spent] a lot more time making sure the signal timing is perfect.”

The end of Super Bowl Sunday will not mean rest for the weary when it comes to the Game Creek and Fox production teams. The Daytona 500, up the road in Daytona, will be held on Feb. 16, and Cleatus needs to be parked and ready by 6 a.m. tomorrow.

“Game Creek has done a fantastic job and is always rising to the challenge,” says Kevin Callahan, director, technical operations, Fox Sports. “Encore is the biggest and baddest truck out there. It was designed to do the Super Bowl, and it has performed up to its task.”