While 102 million NFL football fans had their eyes fixed on Miami for Super Bowl LIV last weekend, Madden gaming fans were tuned in to their own main event 3,000 miles away: the Madden NFL 20 Challenge at the EA Broadcast Center in Redwood City, CA. The three-day live production (Jan. 30–Feb. 1), which featured 16 top players competing for their share of $190,000, marked the culmination of the EA Broadcast Center’s inaugural year, having launched during the 2019 Challenge last March.

“It has been an amazing year: everything that we had hoped this facility was going to be and more has come to fruition,” says Joseph Lynch, head of broadcast, EA Sports. “This was the first event that we’ve been able to do for a second time [in the studio] since we opened it with the Madden Challenge last year, and the weekend went really well. It has been great to see the evolution over the last year; we’ve definitely improved in some areas and created more efficiencies. And, from a staffing perspective, I think we’re hitting our stride.”

The EA Broadcast Center features two main studios: a 2,300-sq.-ft., 360-degree studio where gameplay takes place and a 1,700-sq.-ft. Players Lounge (sponsored this season by Snickers) outfitted with robotic cameras and directional microphones to capture intimate player interactions during events. The studio is equipped with five Ikegami HDK-99 broadcast cameras (with Fujinon lenses), including a jib and an RF Steadicam, as well as three robos (two in the Players Lounge, one in the main studio), and 10 Marshall POV cameras. 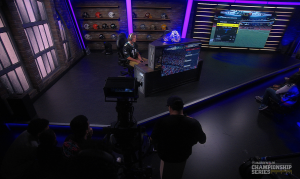 The studio’s versatile design provides EA with plenty of flexibility during the Challenge, which began on Thursday with Group Play featuring 16 players and concluded with a one-on-one showdown in the Final in front of an audience on Saturday (Noah defeated CleffTheGod to become the youngest player to win an EA Major)

“We have a lot more flexibility for the early rounds, and then we transition the [production] once we bring the audience in for the Final,” says Lynch. “Last year, we probably over-indexed in terms of resources. We brought in a remote truck as a backup, and we brought in probably five or six more people than we needed, just to be safe. Over the past year, we’ve ironed all those things out, so now we’re really efficient with how we run things.” 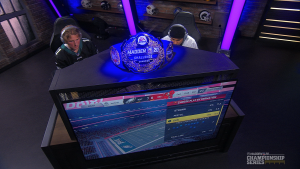 In addition to refining the operation behind the camera, EA also continues to tweak the positioning of the casters/analysts on the set.

“We’ve started to use a lot more areas of the studio now, compared to last year,” says Lynch. “Our casters are using not only the main desk but also a standup area with a touchscreen. Plus, we have the main gameplay area. So we’re moving around a lot.”

EA worked with Troika to revamp its graphics package in advance of this year’s Madden Championship Series season and also began incorporating live-action video clips of players (shot on the green screen at the broadcast center) into matchup-card graphics. 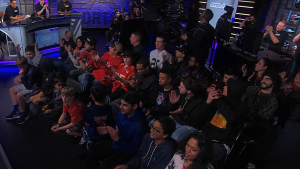 EA brought a live audience into its Redwood City studio for the final day of the Madden NFL 20 Challenge.

“One of our big goals this year was to showcase players’ personalities better and get them on-screen more,” says Lynch. “So instead of just using still images in our matchup cards, we are inserting live-action shots of players into our animations. It’s just much more interesting and engaging. We want to give players a chance to shine. So any chance we have to show their personalities, we’re leaning into it.”

In the that same vein, EA has also begun using a picture-in-picture format more often during gameplay, showing POV iso shots of the two players on the far right side during live game action. 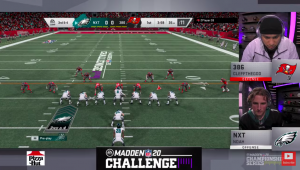 “A lot of times in seasons past, [viewers] were watching full-screen gameplay most of the time,” says Lynch. “We wanted to get people emotionally invested in who these players are, and the best way to do that is to show them onscreen. So we came up with a way to put them on the screen and have it make sense and feel natural. With each play, you can see the emotion and their reactions, but we’re not taking away from the gameplay; we’re complementing them both.”

At the Broadcast Center: Redwood Is the Home of Madden Esports
Last year, the facility hosted three of the four major events in the Madden Championship series: the Madden Challenge in March, Madden Bowl in April, and Madden Club Championship in December (as well as other Madden-related content). Only the Madden Classic (Aug. 30–Sept. 1), which features more than 500 competitors, was held elsewhere, at Esports Stadium Arlington in Texas. 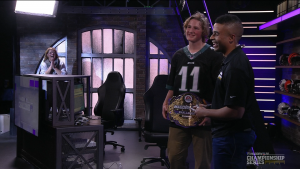 Noah defeated CleffTheGod in the Madden NFL 20 Challenge to become the youngest player to win an EA Major.

“We built the studio for this exact type of event,” says Lynch, “and we’ve customized the production workflows for what we need. We can do almost everything we want in this one space, which has been amazing. We will definitely still go out on the road for some of the larger events — like the Classic — when it makes sense. But, for an event like the Challenge, the studio is absolutely perfect for what we need.”

“We have expanded a ton,” Lynch notes. “More important, we’ve expanded in exactly the ways that we needed to. We don’t have to roll out a B unit to bulk up for bigger shows because everything we need is in-house.”

Beyond Madden: Studio Welcomes FIFA, Apex Legends, and More
Of course, the EA Broadcast Center is more than just the home of Madden esports events; it has also played host to many FIFA tournaments and hosted its first Apex Legends event (EA’s uber-popular new title) last month. In addition, the studio has served a variety of one-off and corporate events for EA. 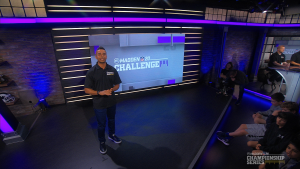 Host Evan Raynr was among EA’s on-air personalities for the Madden NFL 20 Challenge.

The studio was designed by MPKscenic, with lighting by LDG, to enable EA to easily transition the branding from one title to another overnight.

“From a competitive perspective,” says Lynch, “we’re starting to fire on all cylinders and use this thing in ways that, to be honest, we didn’t know if we could originally. That has been really great. It has opened up the opportunity for us to completely change the way the studio looks without much hassle. It’s a much more seamless transition between the shows. We’re making it as efficient as possible so that we can create as much as possible with very little downtime.”