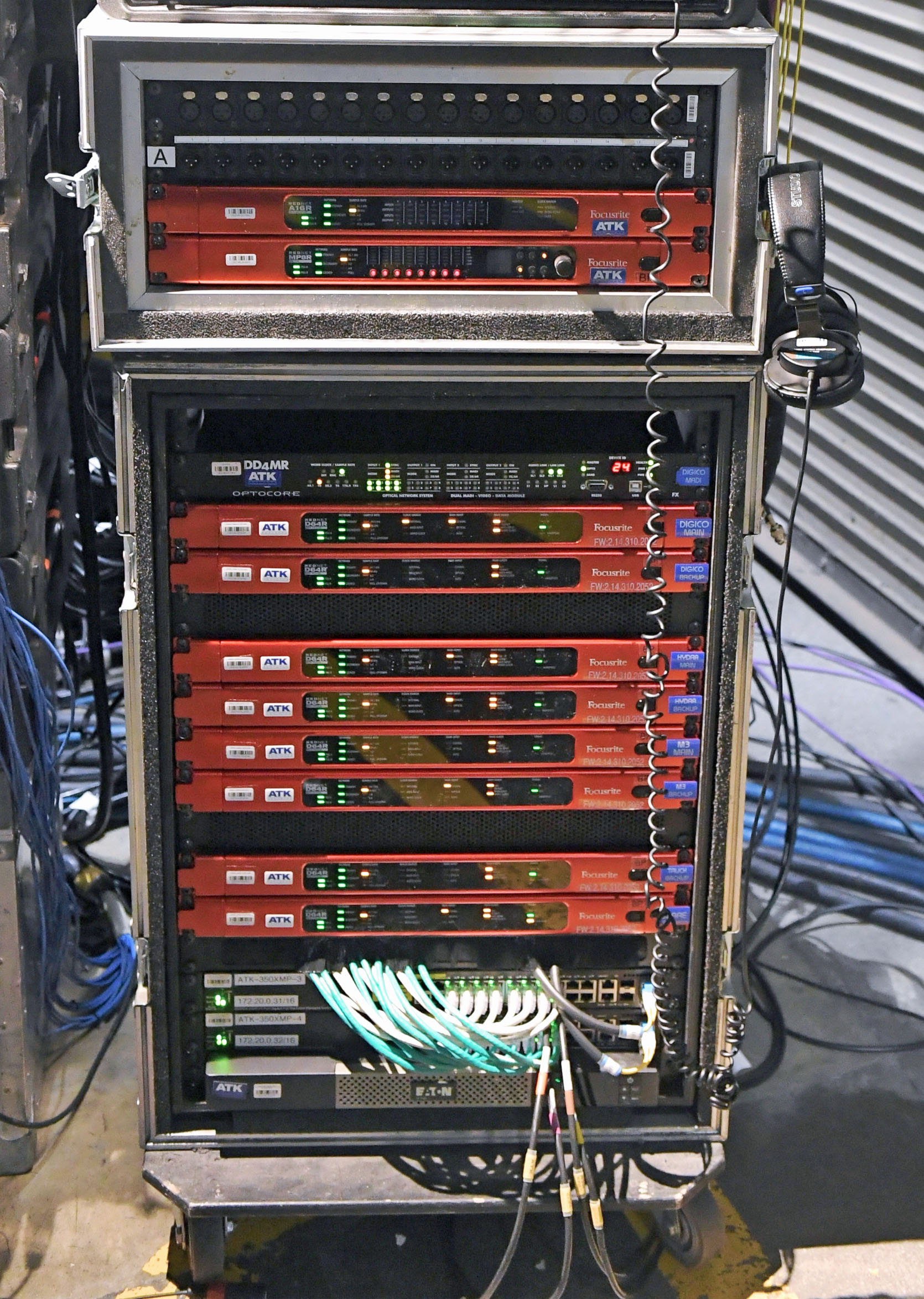 This year, the Grammy Awards show was broadcast live from the Staples Center in downtown Los Angeles on the CBS network on January 26. Performers included Best New Artist nominees Lizzo; Billie Eilish; and Lil Nas X, as well as Tyler, the Creator; H.E.R.; Gary Clark Jr. with the Roots; and Demi Lovato, among many others.

The new AoIP transport scheme was designed to eliminate the complex and cumbersome signal-splitting system that has long been employed to feed signals from the show’s multiple stages to the two front-of-house and two stage monitor consoles, as well as the two music mixing consoles and the broadcast audio production desk in three remote trucks. In addition to the efficiencies afforded by digitally transporting dozens of microphone signals over fiber and making them available everywhere simultaneously, the new system design delivered a noticeable improvement in audio quality.

“The performance mics sounded a lot clearer to me, because they weren’t going through a splitter,” says Eric Schilling, one of two broadcast music mixers stationed in a pair of M3 (Music Mix Mobile) trucks parked outside the Staples Center. “I didn’t feel like I had to ‘carve out’ as much as I do on a typical mic through a splitter, where it might be a little murky in the low end.” In fact, he says, “I found myself doing less processing on the vocals in terms of both low end and high end.”

“We knew we were going to get a better frequency response without all the spitting going on,” says longtime Grammy Awards audio coordinator Michael Abbott. “But it was substantially noticeable. Eric told me he wasn’t having to carve out a lot of the 100 to 300 cycles that he normally would on the RF microphones because of the degradation of the signal going through the splitters and into all the different consoles.”

Schilling reports that he worked on a show with a digital audio transport scheme several years ago and recommended that the Grammy Awards show also adopt AoIP networking. Abbott, in collaboration with other engineers on the show and with Audinate, developer of the Dante protocol, designed a system incorporating Focusrite RedNet D64R MADI bridges to transport signals from the Sennheiser Digital 6000 and Shure Axient RF microphones supplied to the show and coordinated by Soundtronics to the mix engineers. The eight RedNet D64R units delivered the primary and redundant Dante streams to the four mix locations via the respective DiGiCo, Lawo and Calrec console MADI interfaces.

Abbott reports that Jeff Peterson, PA designer for ATK Audiotek, which has long provided house sound production equipment and services to the Grammy Awards telecast, oversaw the preliminary Dante network buildout ahead of the show. “Due to the tight production schedule – two days; 16 hours – that we have available to set these shows up, ATK did the build-out of the network off-site. This allowed for a minimal setup on-site in deploying the Dante sources to the mix platforms.” Abbott explains.

A number of artists, including telecast show host Alicia Keys, preferred to use their Shure analog wireless microphones when performing, Abbott also reports. “They don’t support the Dante protocol, so we added some Focusrite RedNet MP8R preamps to gain them out for noise floor and introduce them as a source into the network.” Focusrite RedNet D16R AES-to-Dante interface units were also available to accept AES inputs from RF mic systems with no networking connectivity.

Ron Reaves, FOH music mixer and another long-serving member of the Grammy Awards audio team, also noticed a significant improvement in the response of the Dante-enabled wireless vocal mics through the P.A. “The mics sounded better right out of the gate, so I had to do a lot less EQing. It was just beautiful. The mics were very quiet with very little handling noise, and there was a lot more top end than we were used to having,” he says. “To the point where there were a couple of performances on the satellite stage near our position where I had to apply a low-pass filter and take a little top-end off, because they were in front of the P.A.”

Production budgets permitting, says Abbott, the plan for next year’s show is to also incorporate the approximately 400 back-of-house channels, including audio tracks and video playback, into the AoIP network. The following year, he says, “The third phase would be to add all the musical instruments.”