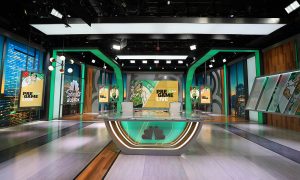 “As we look at the way the world is changing, we wanted to make sure we had a facility that we could grow into in the future so we would be prepared to change with it,” says Chris Wayland, GM, NBC Sports Boston, and Station Manager/SVP, NBC10 Boston, Telemundo Boston, and NECN. “Also, our audience expects us to provide a deeper level of detail and context so that they have a better understanding of the game. This new facility and the technology behind it allow us to take the viewer deeper into the intricacies of the game in a way that we simply weren’t able to do in the old space.”

The move from an aging production facility in Burlington, MA, to the sparkling new Media Center in Needham, MA, represents a major upgrade for the NBCU Boston networks. NBC Sports Boston, in particular, benefited from the move, gaining a picturesque new 50- x 100-ft. studio capable of fitting the entire parquet floor of TD Garden. 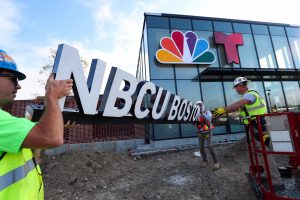 “The stature of the set has been a game-changer from a production standpoint for our producers, directors, and talent,” says Kevin Miller, VP, content creation and strategy, NBC Sports Boston. “They view it as, they owe it to the space to ramp up their game. And I have already noticed a major uptick in our production value —on both [linear TV] and digital platforms — since we’ve moved in here.”

Inside the Media Center: Six Control Rooms for Six Studios

NBCU began work on the project in 2016 and settled on an existing structure in Needham, which was stripped down to the concrete and steel to create an almost greenfield start for the new facility.

“From that moment on, it was a path of discovery in terms of reaching out to all of the staff involved in the four businesses to ask some key questions,” says Keith Barbaria, VP, technology, NBC Sports Boston, NBC10 Boston, Telemundo Boston, and NECN. “Then, we took that information and merged it with some best practices to create a functional requirement document that listed out everything this building needed — from amenities and conveniences to the technology and the on-air goals.” 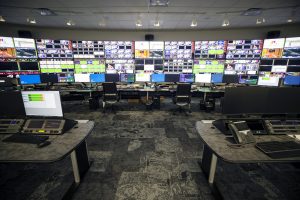 One of six control rooms at the NBCU Boston Media Center

The Media Center features six production studios and six control rooms as well as a dedicated podcast studio for digital/social content. The facility is designed so that any control room can serve any studio at any given moment (although, for operations purposes, each of the four networks has been assigned its own control room and studio).

“If we ever need to swap a studio and a control room for coverage reasons, big events, even maintenance, we can hop around control rooms as needed,” Barbaria explains. “The building also has 60 different places where we can plug in equipment and cameras, so that we can use the entire building as a studio. As a result, we spent more time and resources on interior design because we wanted to show off this whole place and give the content teams the ability to present outside the confines of the studio.”

All-in on 2110: A Look at the IP-Based Future in Needham
One of the key design requirements for the NBCU technology team was to build the facility with an IP backbone to ensure that it is prepared for the future. With the SMPTE ST 2110 Professional Media Over Managed IP Networks suite of standards ratified during the project’s development, Barbaria and company embarked on a mission to make as much of the facility ST 2110-compliant as possible. 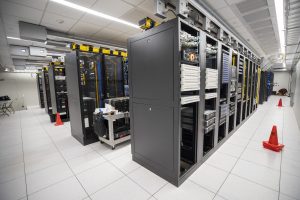 “We’re pushing the margins of what’s possible today with the SMPTE 2110 standard,” he says, “but the real reason [we went IP] is less about now and more for the future. We’ve built this building to [be able to] scale and adapt with the industry without major additional investments. It may be a little pain upfront going 2110 — a lot of vendors aren’t quite ready so we’ve still got a lot of conversion in the building right now — but it made sense for the future.”

NBCU worked with systems integrator Diversified to create a facility built around an Evertz EXE2 IP router that could serve today’s needs while preparing for tomorrow’s.

“We want to be ready for whatever is coming,” says Barbaria. “While we’re a 1080i facility today, we did think about 4K and HDR, and, as soon as that kind of content is wanted by the consumer and transmission is more readily available, we’ll be ready to adapt to those for sure.” 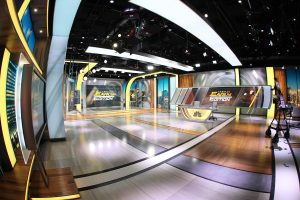 Early Edition is one of three daily programs produced by NBC Sports Boston in Needham.

On the audio side is an SSL Tempest control rack (using Dante) and Shure Axient digital RF microphone system.

Inside the NBC Sports Boston Studio: An LED Feast for the Eyes
During the design process of NBC Sports Boston’s portion of the Media Center, the team elected to knock down a wall between two studios to create one massive footprint. The result is a 50- x 100-ft. studio with multiple positions serving the RSN’s three primary shows: Celtics pre/postgame, Early Edition (nightly at 6 p.m.) night, and Boston Sports Night (nightly at 9 p.m.). 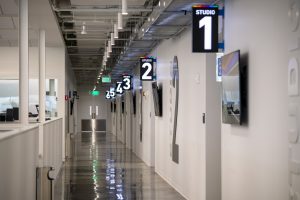 “I think [knocking down the wall] was one of the best decisions we made,” says Miller. “Our [previous studio] was fine, but it was a bit confining in terms of what we could do from a storytelling standpoint across all our different platforms. The [new studio] allows us to have a lot more flexibility. We’re able to create a level of depth and new angles that we didn’t have [previously].”

At the core of the studio is a 30-ft.-long LED “super monitor,” which serves as the visual focal point of the on-air product. It also provides a touchscreen for analysts, as well as an extensive demonstration area featuring an LED monitor in the floor and in the background capable of creating a virtual basketball court (or other playing field) for analysts to interact with.

Not surprisingly, the set has a distinctly Boston vibe with a virtual skyline backdrop that wraps around the entire studio (and can be adjusted to a daytime or nighttime view). The main desk is used for Celtics pre/postgame shows and for Early Edition. Boston Sports Night gets a more casual set outfitted with couches, comfy chairs, and coffee tables. 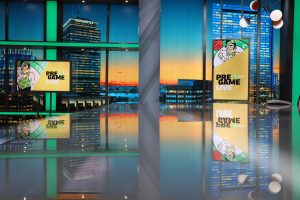 “Having a space like this — especially the demonstration area — is really fun from a producer’s standpoint because it stretches your creativity to think about how to best tell a story using all of those elements,” says Miller. “I feel like we’re only scratching the surface in terms of how we can utilize the entire set. We’ve only been in there for a few weeks now, so we’re still figuring out how we can capitalize on all the monitors, the different camera angles, and the movement between different sets.”

Serving a Rabid Fanbase and Multiplatform Consumption
From the beginning, one of NBCU’s primary goals across all four networks was creating a facility that could serve content creation well beyond linear television. With that in mind, the new Media Center also features a podcast studio dedicated to creating content for digital distribution and social-media channels. 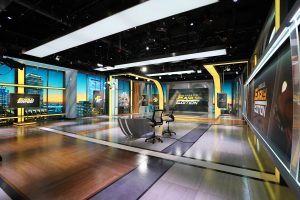 When the NBCU Boston Media Center opened on Jan. 15, it marked the culmination of nearly a half decade of development and labor. However, Wayland and his team view it as just the beginning. 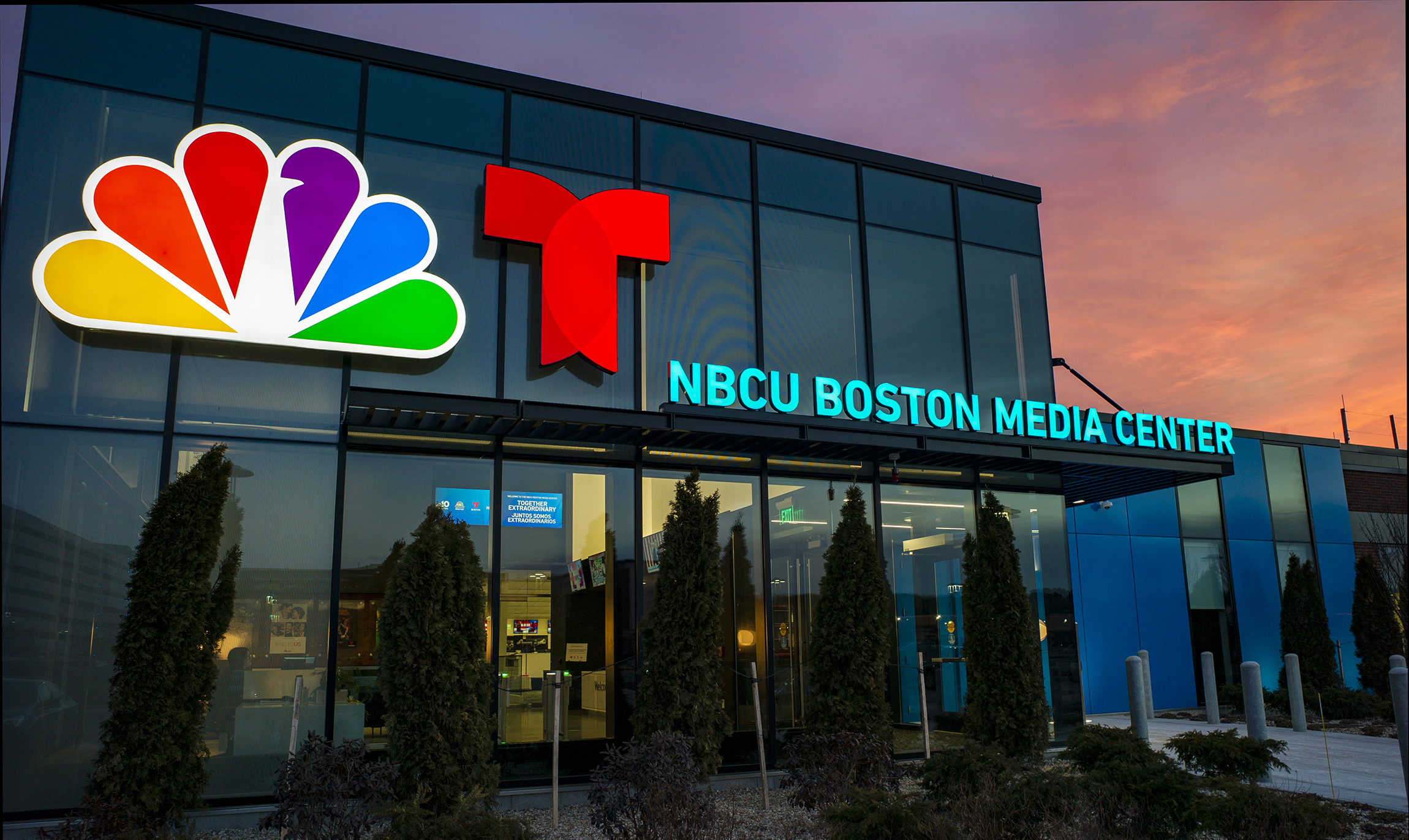 “I think our studio rivals what is being done on a national-network level now, which is amazing,” says Wayland. “The total commitment from NBC and Comcast to invest in all four businesses has been amazing — especially in today’s climate, when a lot of our competitors aren’t investing the way that our company has. We believe that there are bright days ahead, but we need to pivot our content creation correctly. And this building is going to allow us to do exactly that.”