Production team looks to give fans a sense of the place

The Peacock is back out in the wild this weekend: NBC Sports Network will cover its second outdoor NHL hockey game in as many months. The NHL Stadium Series will offer the Colorado Avalanche against the L.A. Kings at U.S. Air Force Academy’s Falcon Stadium in Colorado Springs, CO, on Saturday night, and NBC is once again primed to give hockey fans a unique perspective on the action. 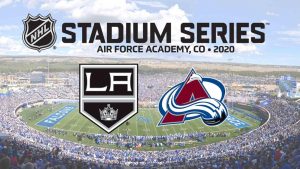 NBC has rolled out a crew of roughly 100 along with NEP’s ND6 and ST28 mobile units (as well as BSI’s RF truck) to serve the NBC Sports production. NBC has also deployed a pair of satellite trucks to Falcon Stadium (one C-band and one Ku-band) as the primary transmission mechanism.

“Connectivity was the big issue as there is no fiber [at the stadium],” says Stuart.  “That’s the reason we have the two sat trucks to get our signal out.”

This isn’t the first time NBC Sports’ NHL operation team has visited an active military base, having worked the 2018 Stadium Series game at the U.S. Naval Academy. Although an active military venue like the U.S. Air Force Academy does have strict protocols for shipping and security, the school is well-versed in the needs of a live production, hosting college football games several times a year.

“Everyone knows the drill here,” says Stuart. “Just a few extra layers for NBC as we are not used to working here.”

Since the game is taking place on an active military base, the NBC ops team did not expect to have an aerial shot, a key element in Winter Classic and Stadium Series coverage. However, they were pleasantly surprised when they were able to work with the Air Force Academy to arrange for an airplane camera.

“We were not expecting to receive permission to have an airplane overhead shooting scenics since this is an active military base,” says Stuart. “Good partnership with the USAFA is making this happen.”

The fixed-wing aerial will be one of 35 cameras deployed at Falcon Stadium, including two RFs (a Steadicam and a handheld), a jib, and eight high-speed cameras (three robos, three handhelds, and two hards).

NBC Sports is also producing its Wired show — with five players on each team, head coaches, and two refs miked up — which is slated to debut in early March on NBCSN.
As is the case with all outdoor NHL events, NBC will put the venue itself front and center, using the aerial shots and onsite studio to give viewers a sense of the place’s ambiance.

“We have a smaller studio footprint as we are taking advantage of the location,” Stuart notes. “We will have Kathryn Tappen and Patrick Sharp on the field for the open and both intermissions, which will provide a great sense of place and atmosphere.”

The puck drops on the NHL Stadium Series clash at 8 p.m. ET Saturday, Feb. 14 on NBC.

Kristian Hernandez contributed to this story.