Embracing a stock-car–racing lifestyle comes with risks. Reaching speeds upwards of 200 mph, drivers face danger at every turn. At the Daytona 500, Broadcast Sports International (BSI) will give fans a glimpse of what it’s like behind the wheel with Visor Cams on the helmets of two participating drivers: No. 48 Jimmie Johnson and No. 77 Ross Chastain. 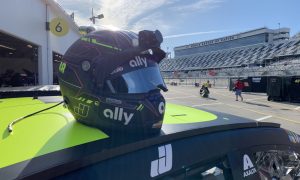 The helmet of both Jimmie Johnson (pictured here) and Ross Chastain will be equipped with a Visor Cam.

“NASCAR has been great over the years about having this gear in the cars,” says Peter Larsson, president, BSI. “They’ve really gone a long way to make sure that the cars that aren’t carrying a camera have the equivalent weights and aerodynamic shape.”

Guess and Check: Testing Becomes a Crucial Step in the Process

In special cases like the Visor Cam, the BSI team did their due diligence in the research and development lab. Over the past six months, testing was done to ensure that Johnson and Chastain would be equipped with a reliable and durable product.

“There were tests where they would put the helmet on a big steel block and drop these heavy weights on it, because one of the big things that you didn’t want to happen was there be enough mass or solidness left in the camera that it could split the helmet open in a severe impact,” says Larsson. “There also was a lot of sled testing where they would put a dummy in a sled with weight and slide it down a 30-ft. path into a brick wall.”

In the testing stages, the technical team wanted to make sure that, during a crash, the camera would essentially disintegrate and detach from the driver’s helmet.

“There’s a certain range of motion that your neck can expand before it will sustain any permanent damage,” he says. “[NASCAR] wanted to see if there was going to be an increase in movement because of the extra weight. So they did an awful lot of work to make sure that there’d be no extra danger.”

Some drivers may deem this application a bit intrusive, but BSI reassured them on the effort’s intended purpose and gained their trust.

“The biggest concern was an issue of liability because there’s a big difference between a driver’s choosing to put a GoPro-esque device on a helmet and our telling them to do it,” Larsson explains. “There are still some drivers that say no, and that’s fine, but we tried to make [this device] as small, light, and non-intrusive as possible.” 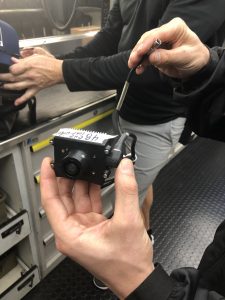 These helmet POV cameras will give fans a view from the driver’s perspective.

Prepare for the Worst: Development for Possible Contingency Plans

As Johnson and Chastain fly down the track, the chance of these POV cameras going offline greatly increases. Despite all the testing that these cameras went through, a high-speed impact could potentially do severe damage. All Larsson and his team can do is hold their breath and hope for the best possible result.

“It’s in the lap of the TV gods at that point,” says Larsson. “In the old days at Daytona, the pit stops, albeit intense, were a little more leisurely. [NASCAR] would actually let us get in and get to the stuff in the car. [My team] does a good job at testing, but it’s just going to be what it’s going to be.”

In case something actually breaks, BSI has a building in the infield near pit row that turns into a makeshift repair shop.

“If it breaks,” he explains, “you can get two bad pieces and get enough to create substantial machining capabilities back in the office. The camera shop will fix anything that we send them. We lose very few [cameras],” he adds. “If there is a wreck or something like that, the only time we actually lose equipment is if there’s a fire or when the cars [slide] into the wall.”

Same Sport, Different Procedure: How Visor Cam Changes for Indy 500
NASCAR isn’t the only motorsport where Visor Cams make an appearance. In 3½ months, the Indianapolis 500 will deploy these cameras on certain drivers on the IndyCar circuit. Besides the car’s being an entirely different structure, other challenges come with what would seem a similar camera deployment.

“The basic concepts are the same,” Larsson points out. “Indy is a specific animal just because the speeds are so fast, and, with the catch fencing, the RF is more difficult.

RF implementation varies given the different capacities at each venue. Indianapolis Motor Speedway, for example, seats about 235,000 people and, with the area in the infield, can accommodate about 400,000. Daytona International Speedway, on the other hand, seats about 101,500 people, with a maximum of about 168,000 including the infield.

“You go up there, set up, test, and you think everything’s all right, but, when race day comes [at the Indy 500], everything is totally different because you start getting all these microwaves that are sitting in the stands,” Larsson adds. “Since Daytona is a much more open environment, the [team] has a lot more experience to know exactly where things need to be to get a better product out there.”

Always Improving: BSI Uses Daytona To Push Toward 1080p HDR
Although the POV shots from inside the car have changed the way folks experience auto racing, BSI wants to continue to push the tech envelope. With that in mind, Larsson and company are looking to improve footage quality with a jump to a higher format. 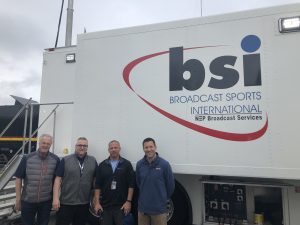 From left: BSI’s Peter Larsson, Steve Miller, Tim Caso, and Sean Seavers are holding down the fort at the Daytona 500.

“Specifically in car racing, we need to get to 1080p HDR. That will be the next step on the development side,” says Larsson. “Unfortunately, this isn’t a simple thing, because, once you start going to 10-bit, all your monitors and everything [else] changes. There will also have to be new transmission systems put into each car. It’s a big project that’s going to cost lots of money.”

From BSI’s perspective, Fox Sports and NASCAR have been two entities that encourage innovation, and, at the Daytona 500, it will be another example of how technologies are heading toward the future.

“Fox and NASCAR have been tremendous to work with because they’re trying to improve the product,” he says. “Now it’s just a matter of making it happen.”