Imagine being the host broadcaster for Super Bowl LIV. Now add the task of relaunching football’s newest property, the XFL. To top it off, mix in NASCAR’s storied tradition in Daytona Beach, FL. For Fox Sports, the past 14 days have been a whirlwind, to say the least. In its 20th season at the Daytona 500, the broadcaster is flaunting new technologies in the infield, such as an FPV racing drone and Strada crane, relying on SMT’s data-tracking for virtual applications, and integrating with locations in Charlotte, NC, and Los Angeles. 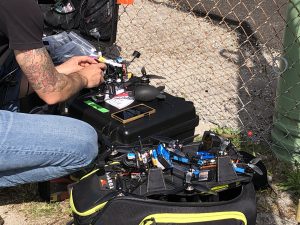 “This will be the third or fourth year in a row that we’ve used a drone of some kind,” notes Mike Davies, SVP, technical and field operations, Fox Sports. “We started off with a tethered drone, then an untethered [one]. This drone is a lot smaller, a lot faster, and super promising.”

The Need for Speed: FPV Racing Drone Puts the Pedal to the Metal

When the Fox production team returned to its war room after last year’s Daytona 500, it was looking for something more out of the aerial coverage. Although previous iterations of the drone had ushered in a new way of capturing NASCAR races from high above, a certain element was missing.

“Every year, I think, we’ve moved the bar a little bit higher, but we never really got what we wanted to get,” says Davies. “In fact, what we found with drones was that, even though there’s a fair amount of effort and expense, the camera itself looks like any other camera. We started looking for a drone that matched a sport that’s all about speed and action.”

To scratch this production itch, Beverly Hills Aerials, a company specializing in film production and headquartered near Fox Sports’ studio in Los Angeles, came to the rescue. A kinship developed, derived from part necessity and part happenstance. 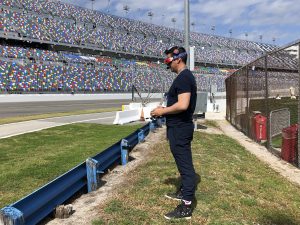 “We were introduced, and in fact, we received their regular email blasts, so we started talking to them about putting together a live package,” he explains. “We’ve been doing some testing out of Van Nuys Airport with these guys. They’ll be in, and there’s always a learning curve for a company that hasn’t really done racing before.”

The FPV drone, typically seen on broadcasts of drone racing, can reach 85 mph at top speed and is navigated with a headset that mirrors the drone’s first-person camera. At the Daytona 500, it is manned by Michael Izquierdo, drone pilot, Beverly Hills Aerials, and viewers who tune into the broadcast can expect to see cinematic shots from man-made Lake Lloyd in the infield and even shots that run parallel along the cars on the asphalt. Given the drone’s work rate, battery levels tend to drain quickly when operating at these high speeds. Despite the 24 extra sets of batteries that Izquierdo’s packing, Fox Sports’ planned role for this device does not include prolonged use throughout the long race.

“The drone is less about covering the race than it is about providing cool, beauty shots,” says Davies. “I’ve got 50 other cameras that are shooting the race, and they do a great job, but this will really enhance our coverage.”

Along with the FPV drone high in the sky will be the network’s Strada crane, reaching new heights. Stationed on the infield between Turns 1 and 2, the 80-ft. extendible structure will shoot sweeping views of the race itself as well as shots of the massive crowd expected to pack Daytona International Speedway. 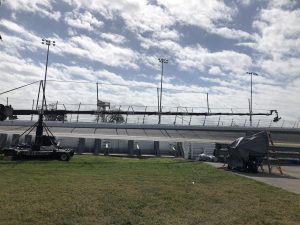 The 80-ft. Strada crane will also capture aerial shots of the race.

The duo of the drone and the Strada crane will traverse the same (if not more) ground previously covered by the Mega Trax Rail Cam. Although the Rail Cam did the job, Davies says, eliminating it came down to a budgetary decision.

“The Rail Cam was cool, but it was very expensive,” he explains. “The distances that needed to be traveled to have an effective shot within a 2½-mile track is exceptional, and the price wasn’t sustainable. I’m hoping with the Strada crane and the drone, we’ll cover what the Rail Cam did last year.”

200 Laps Strong: BSI Visor Cams Top 50-Camera Complement
An auto-racing production is not complete without BSI’s technological handprint. As with the company’s work at the Indy 500, fans will get a look into the cars of multiple drivers during the race. At Fox Sports’ disposal is the returning Visor Cam, a POV camera that will be attached to the helmets of No. 48 Jimmie Johnson and No. 77 Ross Chastain.

“Each one of these cars will be wired up,” says Davies. “There’s between eight to 10 cameras.”

The Visor Cams are only the tip of the iceberg. With a grand total of 50 cameras, Artie Kempner, coordinating director, Fox Sports, has a wide selection to choose from. The complement will include 20 Sony HDC-4300’s and two Sony HDC-4800’s, one shooting in 1080p at 16X speed (or 960 fps) and the other with 4K zoom at 8X (or 480 fps). In addition, five of the 20 HDC-4300’s will have high-speed capabilities at 6X. A fair number of these hard cameras will be outfitted with Canon 95 DIGISUPER lenses. 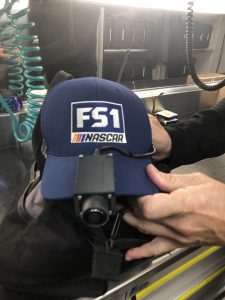 In addition to Visor Cams, BSI is responsible for other POV angles, such as this Hat Cam, which will be worn by reporter Michael Waltrip.

Other specialty cameras on hand include 16 Sony HDC-P1 robos, and nine of the 20 HDC-4300’s will be handheld RF units from BSI. Four POV angles are provided by three Marshall cameras and a Hat Cam worn by Fox Sports NASCAR analyst Michael Waltrip. The Goodyear Blimp will supply even more aerial views from high above the FPV drone and track.

The Virtual Side: SMT’s Data-Tracking Graphics Add Analytics
A NASCAR staple, virtual graphics are once again being created and maintained by SMT. To supplement another wrinkle in the broadcast, Fox Sports is deploying the vendor’s real-time telemetry and data-tracking to paint a statistical picture of what’s occurring on the track.

“We definitely have been using them a lot,” says Davies. “[For example], there is a product called Broadcast Analytics, which essentially is a digital re-creation of the race.”

Although SMT has its hand in all things graphical, Fox Sports uses SMT technologies the most during one-car qualifying. GhostCar technology produces transparent overlays that help fans understand the story about the fight for premier pole position.

“[SMT] makes it easy to show some of the comparative representations of what’s going on,” Davies says. “It makes qualifying a lot more watchable.”

Onsite Family: Loaded Truck Compound Features Game Creek Video, NEP
Outside the track, Fox Sports’ technical team is housed in a total of six mobile production units. Game Creek Video’s Cleatus A, Cleatus B, Robo 1, Edit 1, and GCU Edit 2 are home to a good chunk of the 600 onsite staffers. NEP’s SRT2 is supplying the shared resources for the onsite crew and offsite locations. 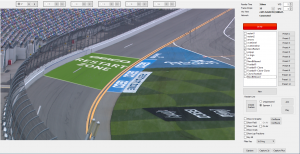 SMT virtual graphics, such as this overlay of the Restart Zone, will play a role in analyzing the race.

“The support units that we have are Edit 1, which we use for submix and racing radios,” says Davies. “We have the Robo truck, and, for this race, we have Edit 2, which houses initial editing [with CMSI] as well as graphics and different things in this workroom.”

It has been a taxing road for Game Creek’s Cleatus. As the main NASCAR truck for Fox Sports’ portion of the season, Cleatus will put a ton of miles on its odometer. In this 14-day span, Cleatus traveled 250 miles north from Super Bowl LIV in Miami’s Hard Rock Stadium to the Speedway in Daytona Beach.

“Cleatus was also the pregame truck for the Super Bowl,” Davies says. “Luckily, it was close, so we were able to move Cleatus out pretty soon after the game was over.”

Rounding out the compound are two BSI trucks for RF needs, SMT’s dedicated truck, and Featherlite structures in place for both Fox Sports and NASCAR Productions operations.

The team inside Cleatus will produce both the race and content created before the green flag.

Offsite Relatives: Charlotte and Los Angeles Assist Production Efforts
In typical Fox Sports fashion, the whole gang gets involved in any major endeavor. This year, locations in Los Angeles and the broadcaster’s NASCAR home in Charlotte are providing infrastructure that alleviates some stress on the onsite forces, such as offsite editing. To stay connected, the network is leaning on AT&T’s fibered roadmap to transmit information over IP. 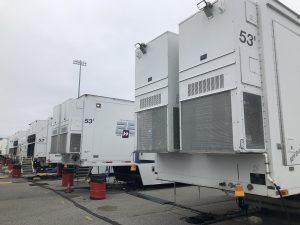 Game Creek Video’s Cleatus A and B, Robo 1, Edit 1 , and GCU Edit 2 are present in the compound.

“With that sort of bandwidth, there’s a fair amount of flexibility in terms of signals coming and going,” says Davies. “Between Charlotte and [Daytona], we’re able to utilize the resources from the other sites [and vice versa]. The connected compound couldn’t be more important.”

Along with technical help, Charlotte is offering programming from its virtual studio in congruence with the onsite studio shows happening at Daytona.

“On race day, we have [race analyst] Larry McReynolds, who’s in Charlotte, analyzing the race,” Davies says. “We feed him a fair amount of stuff, so that he basically gets exactly what he would get if he was here in a booth in Daytona.”

Whether in Charlotte, Los Angeles, or the onsite trucks in Daytona, it will be a combined effort to stitch together overarching coverage of the competition.

“It’s a little bit of a ping pong that’s going back and forth,” he says. “We consider our compounds sort of a connection between Charlotte and here.”

Fun in the Sun: Fox Sports Reflects on 20 Prosperous Years at Daytona
Despite the sports world’s colliding in the month of February, Davies relies on a close-knit team to pull off these shows on three consecutive weekends. 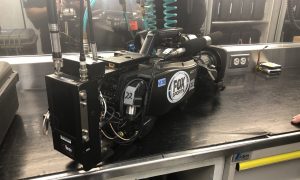 “I have an awesome team,” he says. “David Hill [director, motorsports operations, Fox Sports] was able to kind of keep his eyes on Daytona and everything that was going on down here by working with the crewing department. [He and] Dave Jones, who handles operations for the XFL, sort of reported up to me and the engineers in terms of how everything’s going. It worked out really well.”

With NFL’s tentpole event and the kickoff of the newest football sensation in the rearview mirror, Fox Sports is enthusiastic about moving forward with innovation at Daytona. That has been true for two decades, and new initiatives are in the pipeline. Given the willingness of its racing partner, the future is limitless.

“We’re looking at things like 1080p and HDR, but just the overall quality of the pictures has been fantastic,” says Davies. “NASCAR, in general, doesn’t turn away any sort of technology, so this race is covered better and better every year through technology.”