FIN7 is designed for both traditional sports and esports

Ross Mobile Productions (RMP), the production arm of Ross Video, has launched its seventh unit (named FIN7), expanding its ability to deliver high-quality video coverage of sports and other live events via its fleet of cost-effective, full-service, remote-production vehicles. The newest made its debut last weekend for college basketball at Yale University. 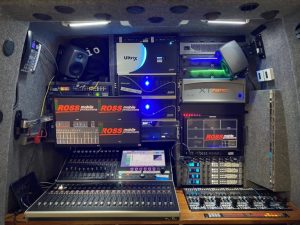 RMP GM Stephen Repass says the company had an amazing 2019 and produced a record amount of content for a diverse range of customers.

“Our schedule is already filling up for 2020,” he says, “and it looks like we’re set to surpass our record in terms of the number of productions managed. We knew last year that we would need additional resources, and this new FIN7 truck will be capable of handling events large and small.”

The truck has six Ikegami CCU cameras on board, one a super-slo-mo capable of 1,000 fps. The truck is built for both traditional sports and esports, with all-1080p CCUs, a new 580-hour Mira+, and 25 router inputs for gaming or observer PCs.

“This new investment is a testimony to the hard work of the RMP team who have consistently produced great-looking content that has delighted our customers and their audiences in turn,” says Repass.

The new FIN7 production vehicle houses a full suite of Ross solutions, including the Carbonite Black Plus production switcher, XPression graphics suite, Ultrix routing/AV-processing platform, Piero live sports analysis and telestrator, openGear frames and cards, and DashBoard control panels. And, for the first time, an RMP truck incorporates a Calrec audio console to make it easier to handle audio for a show. Two fiber field audio kits are also aboard, with the option of two more through the Hydra2 Hub.

“We’re committed to building and operating production vehicles that reflect the best of Ross,” notes Repass. “Ross helps customers to deliver high-impact, high-efficiency productions; the RMP team is like an in-house customer, and we can attest to how well Ross does precisely that.”