Super Bowl LIV at the Miami Dolphins’ Hard Rock Stadium in early February might have seemed the outcome of a few feverishly busy weeks, as the venue expanded its audio and other systems to accommodate the event. In reality, however, the stadium started on this mission more than five years earlier: while the venue was preparing to update its AVL systems ahead of the 2016-17 NFL season, the ambition was to host a Super Bowl event in the near future, two years before the league announced its choice for the 2020 game’s site.

The $350 million stadium renovation began in January 2015 and included videoboards in each corner of the stadium, additional VIP suites, and an open-air canopy over the main seating areas, as well as a new sound system and video-control room. 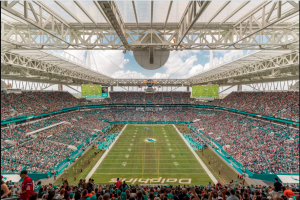 The new design, by architect HOK, was a preview of the next generation of luxe features that the NFL was pursuing. Among those features are 50 four-seat pods that were installed in the lower bowl and the south end zone and offer a living-room arrangement, with premium furniture and television screens that show the NFL RedZone channel and NFL programming.

Hard Rock Stadium’s new sound system, a weatherized Electro-Voice 186 XLCi-127DVX line array, designed and installed by integrator Diversified, also prepared it for broader large-event applications. As did the enlarged three broadcast-truck connection docks, each linked by fiber to the others, also implemented by Diversified, and to the venue’s expanded video-control room.

Concepts Focused on a Super Bowl

“The big driver for all of this was the goal to host the Super Bowl,” says Pete O’Neil, director, engineering, Diversified. “All of the AV-design concepts that were developed were focused on that, including the sound for the bowl and AV for specialized areas, such as the suites and high-end clubs.”

The process was as much prognostication as integration: predicting what the technical demands of a global-scale event would be in five years — an eon in digital-AV chronology.

“We made a best effort to forecast the requirements for Super Bowl that far out,” says Justo Gutierrez, director, AV and sound, sports and live events, Diversified. “For instance, the scale of the truck compound was unprecedented, allowing up to five double-wide trailers to slide in and out of the main location, with two satellite locations connected to it. We worked with the Dolphins technical staff to make all of this as flexible as possible, because we didn’t know what it would be asked to do years from now.”

A key focus was connectivity. Cable and digital audio formats come and go, but a bridge between various formats — including ones on the horizon (the AES67 and ST 2110 protocols were just being formulated at the time) — would be necessary to allow supporting systems to plug into the stadium’s installed systems.

For example, for Super Bowl LIV, additional live-sound systems were brought in by ATK Audio for the pregame and halftime entertainment events, and 24 cameras and an extra Evertz DreamCatcher replay system were implemented by Van Wagner Sports & Entertainment for the in-venue show. Large-scale systems like these have to seamlessly connect and integrate with the venue’s permanently installed AV, which means that the infrastructure around the systems had to be fortified for the future.

“We had to anticipate cabling and connection locations that weren’t necessarily used for ordinary NFL game day, such as adding sound at the field level, as they do for Super Bowl, and making sure there was additional capacity in the cable trays around the stadium,” O’Neil explains. “We had to make sure that every request to get signal from one point to another in the stadium could be accommodated and that it could be done quickly. That meant putting in a lot of fiber capacity as well.”

Gutierrez adds that the QSC Q-SYS control system was chosen because of its ease of routing: “For instance, during the Super Bowl, there are a lot of different audio sources and zones. You want to make sure all areas around the stadium are getting the correct audio program at the appropriate time. We developed different presets for the handoff between show elements to make sure all of that was in sync,” he says. “That flexibility was preprogrammed years before it would happen.”

That planning got tested this year with the first collaboration between the NFL and Jay-Z’s Roc Nation. Instead of the venue’s installed audio system, all the pregame and halftime music would be performed through the system brought in by ATK, which had to connect and route through the signal-transport matrix designed and installed by Diversified years earlier.

“It worked perfectly,” says O’Neil. “And it was ready to go for the Miami Open tennis tournament, which the Hard Rock Stadium would host in March. The systems are designed to be ready for anything, because that’s what they have to be now, given the variety of events hosted at the stadium.”