As part of SAP’s vision for a cleaner ocean, recently announced at the World Economic Forum in Davos, the company is building a digital platform to support experts and advocates. SAP is partnering with eXXpedition and the initiative co-founder, ocean advocate Emily Penn, to support its commitment to a cleaner ocean by 2030. Emily and her team have invited 300 women from all walks of life to sail 38,000 nautical miles in 30 stages. The women have one mission: to explore the science of — and solutions to — ocean plastic and become ambassadors to combat ocean pollution. 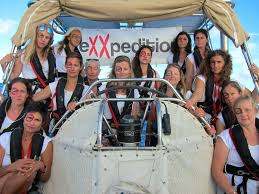 SAP and eXXpedition are working together to promote clean oceans.

The need for ocean advocacy is greater than ever before. Research suggests there could be 1 million times more microplastics floating in our oceans than previously thought. But in truth, no one has a precise metric on the volume or impact of plastic polluting the oceans. Emily and team aim to raise greater awareness based on scientific data with the help of SAP.

“I’m incredibly excited to join forces with SAP to improve the health of our ocean by bringing together the energy of our eXXpedition community and our scientific research with SAP’s innovative technologies,” said Penn. “Industry has a huge role to play in addressing the challenges our ocean faces. The most pressing problem is how to turn off the tap to plastic pollution, and the next years will be spent doing just that — trying to prevent plastic getting into the ocean in the first place. For us to do that, we need everybody on board and, in particular, we need businesses to come to the table and take a lead, as SAP is doing.”

The software giant will share data and insights from the eXXpedition voyages to provide customers, non-governmental organizations (NGOs), governments, and partners with the tools, insights, and solutions needed to eliminate waste, maximize resource productivity, and help raise awareness of the need to create a cleaner ocean for all. One step in that direction is the Plastics Cloud, a pilot program from SAP that was launched last year to help reduce the waste of single-use plastics.

Building on that program, SAP will support Penn and eXXpedition by creating a custom-built digital platform to educate people on actions they can take to reduce plastic waste in their local communities. Enabled by Ariba Network, the Plastics Cloud allows brands to connect with new recycled plastics and alternative supply sources. About 40 percent of plastic produced globally is used in product packaging, but less than one-fifth of this plastic is recycled, creating serious environmental and human health problems.

Around $10 billion worth of packaging flows through Ariba Network annually. “Even a small portion of global spend on packaging redirected to pre-certified suppliers of recycled plastics and alternatives can have a tremendous impact on the environment,” said Stephen Jamieson, head of Sustainable Business Innovation for SAP in Europe, the Middle East, and Africa.

In one of her speeches, Penn recounts how she was hitching a ride from England to Australia on a sailing boat a few years ago when she and the crew were alarmed by thuds on the hull. They found themselves surrounded by countless pieces of plastic a thousand miles from land. “That didn’t make sense,” she says. “The closest people to us were in the space station in orbit above us, yet here was evidence of human life and waste in the most remote part of the planet.”

That journey sparked her mission to connect scientists and communicators with the ocean. Emily has experienced the challenges firsthand on visits to the Pacific, where islanders are struggling to catch fish because commercial vessels empty their waters and are also struggling to grow food because rising sea levels make land salty. “These people are now reliant on packaged food and drink, which comes all wrapped in plastic,” she says.

Besides the sight of plastic in the ocean, the worst thing for Emily was the knowledge that burning plastic releases chemicals that lead to cancer and disrupt human hormones.

Women are still only 13 percent of the science, technology, engineering, and math (STEM) workforce, but that is not the only reason eXXpedition is taking an all-female crew.

Historically, studies on the effects of chemicals on human health have focused on men simply because they make up the majority of the workforce in areas where occupational hazards have been studied. As a result, research on female-specific diseases has had a low profile. This imbalance is becoming increasingly important as the incidences of non-communicable diseases, such as cancers, are increasing.