Boxing is as old school as sports gets now, and the sound for this weekend’s Deontay Wilder vs. Tyson Fury II — aka Unfinished Business — is equally hard-fisted, with tons of microphones strewn around and overhead in MGM Grand Garden Arena in Paradise, NV, ready to pick up the punches and more.

The event will be broadcast on ESPN, which is doing the production, and Fox Sports (because the fighters’ respective television rights are held by the two networks) and PPV. It will be bigger in scope than the regular Top Rank bouts on ESPN, according to A1 Tad Wimer.

“We’re following the same format that we use for the Top Rank events, but this is on a much larger scale,” he says, noting that four production trucks, including NEP NCP-10 and ND-7, will be deployed, instead of the single unit used for most fights.

The Wilder vs. Tyson Fury II production comprises 38 cameras — more than ever deployed for an ESPN boxing production — including seven super-slow-motion and six robotic units, a 4D system that allows 360-degree replays, a mini Flycam, a JITA camera for unique shots, and bumper-corner cameras.

Unfinished Business will have dozens of microphones distributed around the venue (most focused on the ring) and on all the referees for each of the six bouts on the card. Also, lavs are expected on the trainers. 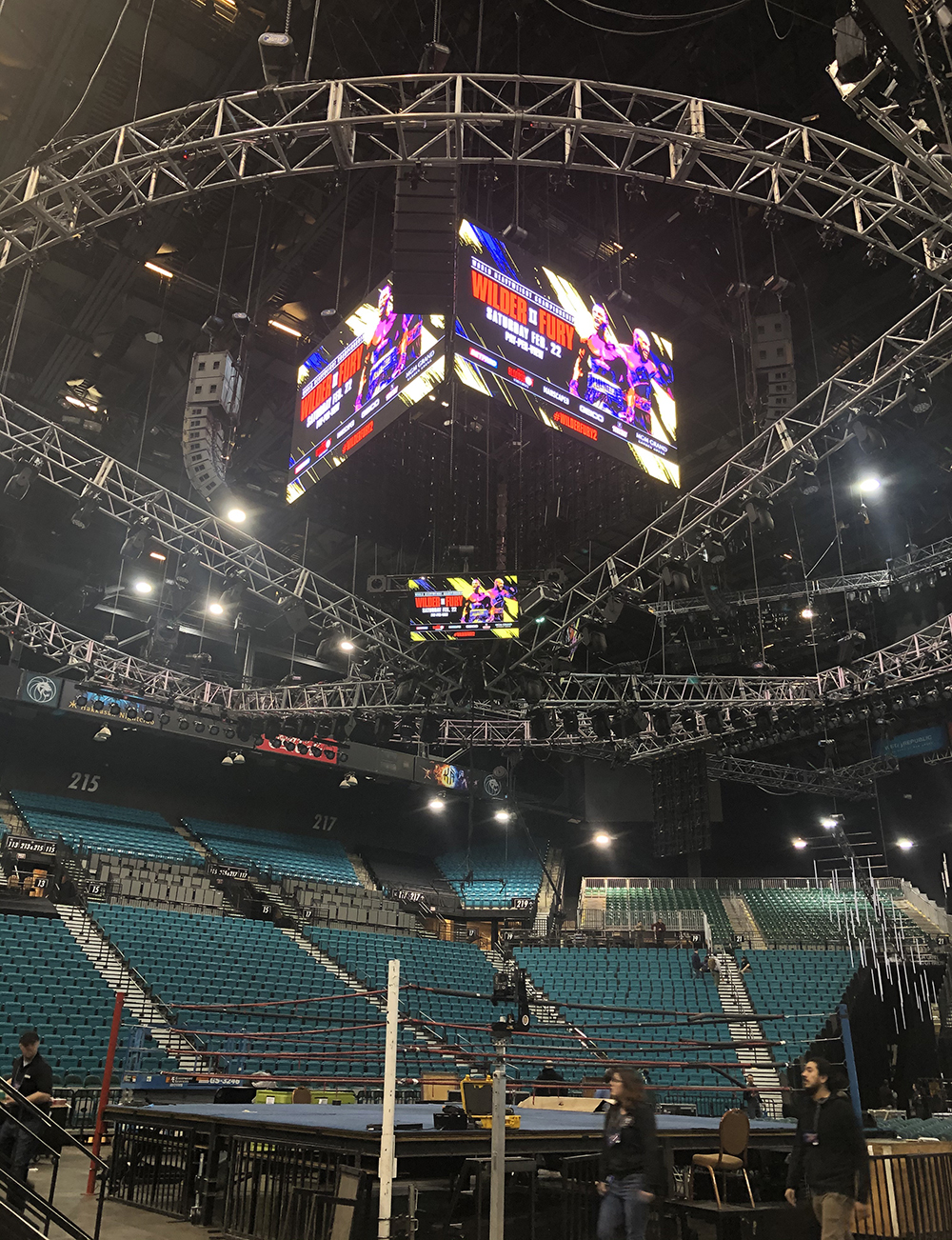 ESPN will deploy its “Tiffany” mic array above the ring (seen here) to capture in-ring audio.

Ringside A2 Lance Palmieri is running lavaliers’ wires up from the ring pads to the bottom of the perimeter ropes, keeping the mics in place with red tape, angled at 90 degrees and pointed toward and about 2 ft. away from each fighter’s corner, ready to pick up activity there should a trainer lav fail or not be available. These also eliminate the need for fishpoles over the ring.

Meanwhile, RFA2 Ben Sims and his colleagues will deploy dedicated wireless packs that will be taken to the various locker rooms to follow the sounds of fighter and trainers getting ready and then walking into the arena. A red and a blue pack will be used for opposing fighters for each bout.

But the crown jewel for the show will be the “Tiffany” array flown above the ring. It’s a concoction comprising six Sennheiser 8060 mini-shotgun microphones, four facing outward to pick up ringside-crowd noise and two facing directly downward and processed to avoid phase problems. These pick up most of the footwork and punches — “99.5% of that,” Wimer estimates. Normally placed 9.5 ft. above the ring, for this fight, the array has been moved a full foot higher.

Other microphones are located on a robo cam in the far neutral corner and in the far corners of the arena to get the sounds from the floor seats, fans whom Wimer calls “the most rambunctious” and who provide high levels of enthusiasm.

There’ll be plenty of RF for the fight. RFA2 Jordan Smith supervises the Shure Axient wireless system, the G57 version for wideband applications. In addition, Riedel Bolero is used for wireless comms in an AES67 mode. 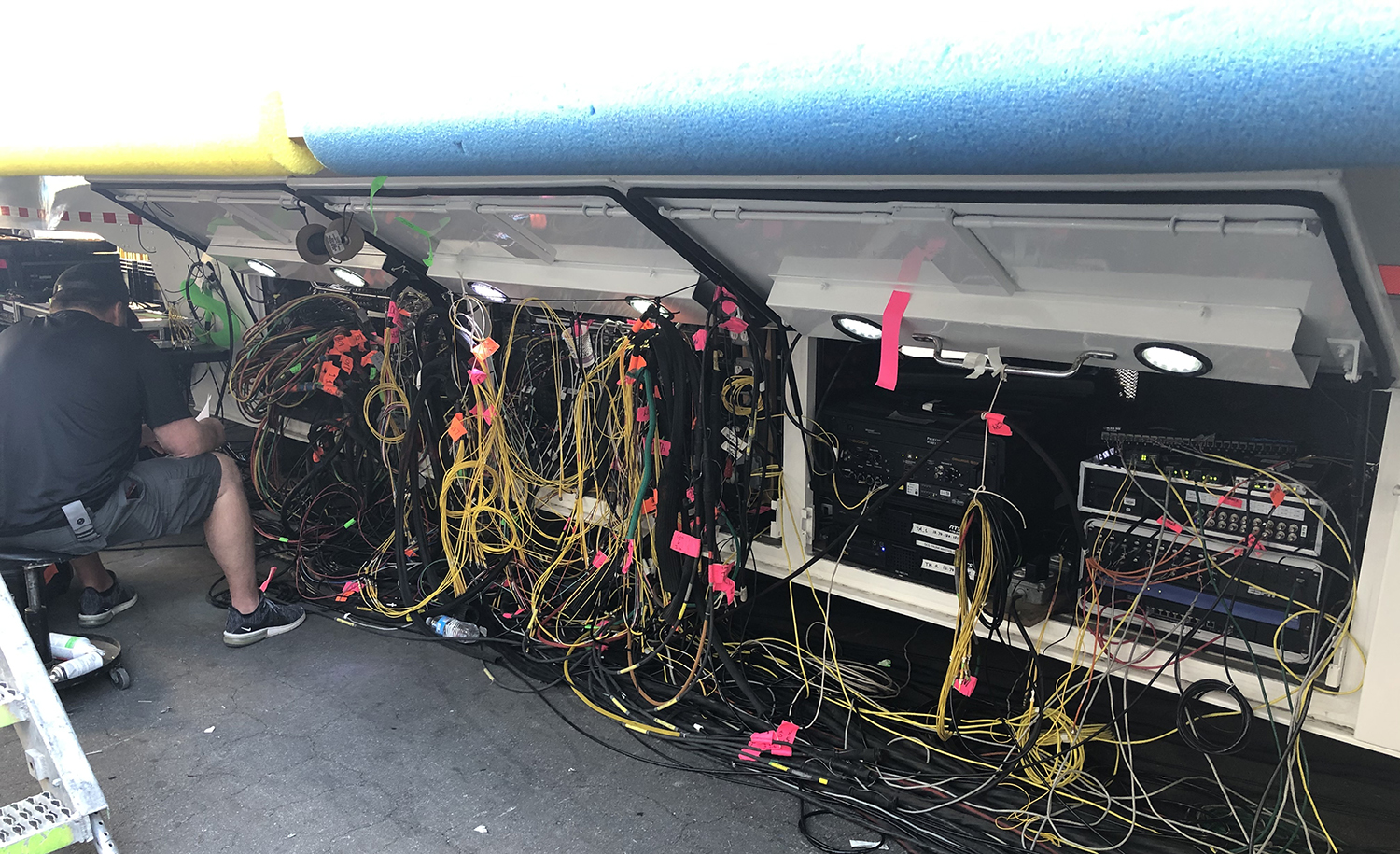 ESPN will deploy one of its most complex boxing productions ever for Wilder-Fury II on Saturday.

“That clears up a lot of frequencies used for base-station transmit,” he says. “We also use [spectrum analyzer] Signal Hound to police the arena several times a day looking for any rogue frequencies.”

An RTS VoIP system is used for wired intercoms, all on a Dante network like much of the rest of the wired audio. RVON panels are placed throughout the arena and on the trucks and are used to communicate cues for the walk-on music and dramatic lighting that make the fight into a spectacle.

“When we do comms for most of these [fights], we are covering the event,” says comms A2 Eric Williams. “For this fight, we are part of the event. We’re literally putting on the show. For instance, they have to wait for our call before a fighter walks out. We coordinate the lights and the music from the DJ. It all has to be synchronized. It has to be a well-oiled machine.”

Unfinished Business is shaping up to be an old-school broadcast blockbuster.

“We worked hard to get the right people into place, and they are doing a great job,” says Kim Bloomstone, remote operations manager, ESPN. “We’re looking forward to a great event.”