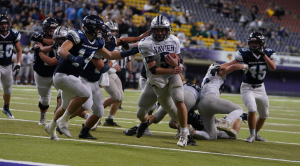 Serving nearly 50 TV stations in Iowa, Idaho, Minnesota, Nebraska, and South Dakota, the IHSSN has become the go-to destination for viewers to watch highly competitive games in real-time. The ability to capture the sheer number of games outdoors wouldn’t have been possible or allowed for an expansion using satellite connectivity. The network was introduced to LiveU and quickly realized the capabilities and cost-savings they could accomplish with cellular bonding technology.

“In Iowa, we don’t have a professional sports team so high school sports is on everyone’s mind,” says a spokesperson from the IHSSN. “It would have been cost-prohibitive to stream outside using satellite. With LiveU, we can put an encoder wherever we want and send content anywhere we want.”

LiveU Matrix Content Contribution and Distribution Service takes that a step further, enabling the network to quickly and easily give its affiliate stations unparalleled access to live feeds from LiveU units in the field and other sources.

The network has 18 Championship Football live streams in the works with 90+ events planned for 2020.