The sixth-annual event discussed the latest in AR, MR, and more

The SVG Sports Graphics Forum welcomed more than 220 attendees to the SVA Theatre in New York City on Wednesday for a full day of sessions addressing the latest technological advances and creative-design trends in broadcast graphics. Spearheaded once again by the SVG Graphics Committee and its Chair, JP LoMonaco, VP, on-air graphics and design, CBS Sports, the sixth-annual event covered a wide variety of topics, including augmented reality and virtual analysis, data integration and sports betting, and OTT and streaming. 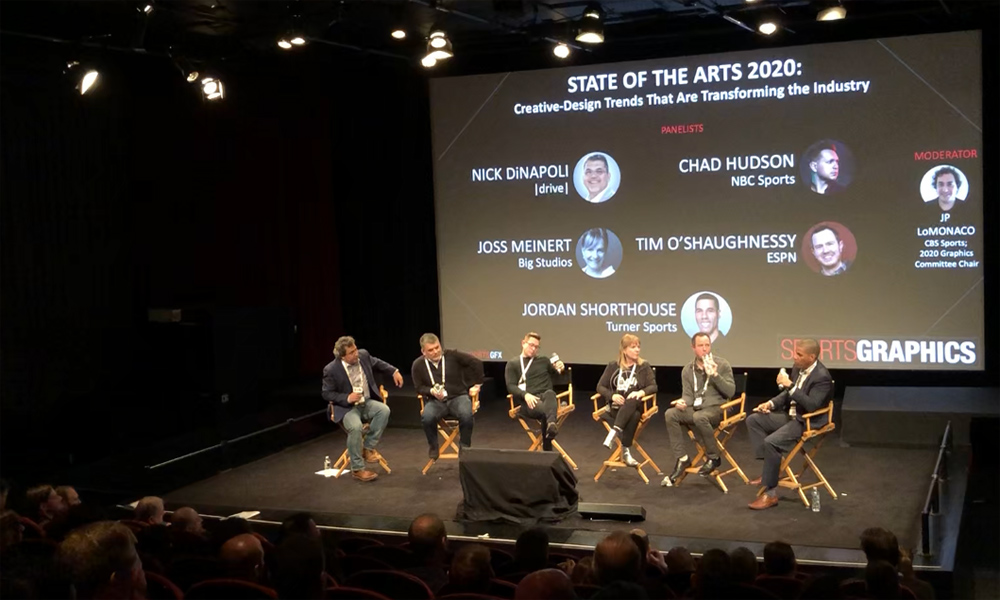 “We’re living in a huge moment where so much is new,” said LoMonaco. “Now we’re figuring out how to interact with [these techniques] in order to push the industry forward.”

“Time, in general, has such a large importance in not only basketball but all sports,” he said. “Moving forward, we think it’ll be a positive addition and bring value to the fans.”

Following a networking break where attendees were invited to view Technology Showcases from Vizrt, Maxon, and Ross Video, a panel discussion by executives of MLB Network/NHL Network, ESPN Creative Services, The Famous Group, BBC Sport, and Univision Deportes delivered an in-depth look at how augmented reality and virtual-analysis tools are being deployed for game coverage and in the studio by top sports-content creators and technology providers.

After breaking for a networking lunch, the Forum continued with a look at graphics and data integration for sports betting. Leaders from UFC, |drive|, NBC Sports Philadelphia, CBS Sports Digital, and Sportradar discussed how this new frontier could impact production workflows.

“A driving force in this project was our CEO Eric Shanks and [EVP/Head of Production and Operations] Brad Zager,” said Hartley. “As fans, we view these skill players as superheroes, so we hired a sketch artist from Philadelphia [for the caricatures] and wanted to make it feel like a videogame in some way.”

Following another networking break, digital leaders from ESPN, CBS Interactive, and Disney Streaming Services convened to share their experiences in managing the transition from linear TV to streaming outlets, as well as the challenges that go along with creating graphics that can serve big and small screen alike.

The final panel discussion of the day offered the vendor perspective on where broadcast-graphics technology is headed. As the needs of live-sports broadcasters and streaming outlets evolve, such companies as Maxon, Epic Games, Vizrt, ChyronHego, and Ross Video are adapting and finding innovative ways to serve both the client and the fan.

Rounding out the day, Michael “Spike” Szykowny, senior director, motion graphics and production planning, ESPN Creative Services, took the stage for the third Keynote, explaining how ESPN reimagined its Monday Night Football graphics package and the strategy behind a package that changed the design landscape and highlights the intensity and passion found only in pro football.

“We wanted to showcase the history of Monday Night Football while also providing a unique take on what we had to work with,” he said. “In creating this entire toolbox and collecting all of these assets, we were able to develop some pretty cool looks and elevate the entire customized aspect of the package.”

The SVG Sports Graphics Forum was made possible by the support of the SVG Graphics Committee, Title Sponsor Vizrt, Gold Sponsors Maxon and Ross Video, and Event Sponsor Brainstorm.

Stay tuned to www.sportsvideo.org for continuing coverage of the SVG Sports Graphics Forum, podcasts featuring both Keynote Conversations, a video recap of the Closing Keynote Presentation, and full writeups and audio from the day’s panel sessions.