In Belgium, Fluxys is responsible for the operation and maintenance of high-pressure pipelines, the gas storage site in Loenhout, and the liquefied natural gas (LNG) terminal in Zeebrugge. Each day, the dispatchers at Fluxys oversee 4,000 kilometers of high-pressure gas pipelines. To provide the best work environment for their dispatchers, Fluxys decided to renew the front-end of their dispatching system entirely.

“Having had great experiences with the Matrox Extio 2 Series KVM extenders, our decision to select the Matrox Extio 3 Series IP KVM extenders was an easy one,” recalls Tim Deleeuw, project manager at Fluxys. “Extio 3 Series features the familiar industry-leading KVM extension performance, feature set, and reliability that we were looking for, while offering support for the latest Windows operating system. The transition was seamless.”

Centralization of assets
All the computers that were once found at each dispatcher desk have now been moved one floor below the control room, at distances between 50 to 100 meters (164 to 328 feet), to a secure and heat-and-noise-controlled data center. Each computer is connected to an Extio 3 N3408 transmitter, and all signals are extended over a single fiber optic cable to the dispatcher’s desk where the quiet and compact Extio 3 N3408 receiver appliance powers the keyboard, mouse, and four DisplayPort screens. Fluxys is in a good position to transition smoothly from its current point-to-point to a networked configuration in the near future, as Extio 3 readily supports both types of configurations. 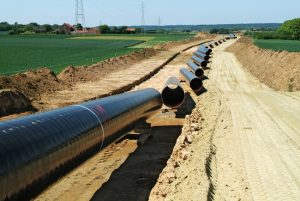 New delocalized setup
At the company headquarters in Brussels, every dispatcher desktop (six of them) is now equipped with two Extio 3 N3408 receiver units to support eight screens displaying data from three types of systems. For making nominations to clients who buy natural gas or liquefied natural gas from Fluxys or store them, the dispatchers use a gas flow application called GSmart. The second is a supervisory control and data acquisition (SCADA) application portraying the real-time gas flow environment of high-pressure pipelines. The third is ASTRID, a system that manages the voice and data communication network for all emergency and security services in Belgium. Extio 3 flawlessly extends all signals and provides seamless remote desktop to the dispatchers for these time-critical applications.

High availability of systems is also important for Fluxys’ dispatching operations. To this end, Fluxys has set up a back-up center. In this location, the dispatcher clients and Extio 3 units are deployed in an exact replica of the setup at the Fluxys headquarters. Should something happen to the primary systems, this disaster recovery setup allows the dispatchers to shift to the back-up center and resume operations.

Transmitted benefits
The impact and advantages of deploying Extio 3 are manifold—to the company as a whole, the dispatchers, and the IT staff as well.

“The Extio 3 IP KVM extender standalone appliances were straightforward to install and proved their stability,” says Deleeuw. “Our IT staff are pleased with the final, delocalized setup, while dispatchers enjoy a decluttered, streamlined workspace with increased comfort, ergonomics, and productivity.”