Along with extensive facilities for broadcast- and live-production education, Full Sail University is home to the Dan Patrick School of Sportscasting, which offers a degree program in sportscasting. Although Patrick — a legendary sportscaster, radio personality, and host of The Dan Patrick Show on Premiere Radio Networks and Bleacher Report — is often on campus interacting with the course’s 100 or so students (and another 200 or so online), Program Director Gus Ramsey describes himself as the “team manager,” guiding the program day to day. Ramsey — who was a producer and coordinating producer at ESPN for 20 years and has worked with and coached some of the best-known talent on such shows as SportsCenter, Baseball Tonight, and NBA Tonight — sat down with SVG last month to discuss what goes into making the next generation of sportscasters. 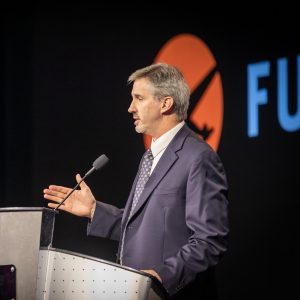 Full Sail University’s Gus Ramsey: “What’s changing is the opportunity in all the different places where you can do it, but live sports is never going away.”

What does a sportscasting degree entail in terms of curriculum?

Our entire focus is how to be a sportscaster, covering it both in front of the camera and behind the scenes. We’re in our own separate program within Full Sail University. We’ve got 32 classes: 15 of them are sportscasting-specific, and 17 of them are shared [with other Full Sail programs, such as Sports Marketing]. There are four classes that everybody has to take, no matter what other Full Sail program they’re in, and the rest of the classes cover sportscasting territory.

One of the classes is broadcast writing, where the focus is solely on learning how to write for sports broadcasting. We also have a class that focuses entirely on how to execute live shots, in which we put [the students] under the deadline of doing a live shot: they have to leave the classroom, go to an area where they are conducting a group interview — kind of like what we’re seeing with the Astros this morning — and then scurry back to class and line up in front of their cameras, where they’re counted down to a live shot.

We have two classes where they go into the studio and produce, write, edit, and host shows anywhere from seven to 15 minutes in length. In one of those days, they spend the morning doing a 3½-minute sportscast and then have to reconfigure that sportscast, add an additional minute of content, and then perform that, which gives them a sense of what it’s like to do a 6:00 sportscast and an 11:00 sportscast.

Yesterday was Day One of Daytona Speed Week Media Day, and 20 of our students went out there and got to take part in all the media activities, including going on an interview with the drivers. They get a real taste of what it’s like to have to go out and cover a big event like that.

What need does the program fulfill in a rapidly expanding media industry?

Based on my experience at ESPN, we’re seeing a lot of young production assistants come into the company not fully aware of everything that they need to know to enter the sportscasting workforce. Dan Patrick and I recognized the need to better prepare people to hit the ground running. For example, at ESPN, a production assistant comes in and is given six or seven months to learn.

[At Dan Patrick School of Sportscasting,] we spend a lot of time teaching our students those same things, so that, when they walk in the door [at a network], they’re already aware of all that stuff they need to know. We had two grads who started there in January of this year as production assistants, and they’re already doing great. We constantly put our kids under deadlines so they know what that pressure feels like. To me, the biggest thing is just preparation. We’re getting people ready to go do this from the start.

What’s the hardest part?
Our students are constantly being evaluated on their performance, and it can be hard, for someone in their early 20s, to put yourself out there in front of other people and expect to be criticized on it. It’s like doing American Idol every single day. We want them to understand that this isn’t criticism; this is constructive feedback. We are going to point out the things that you’re not doing well, but we’re also going to explain to you how to do them better.

Dan was just here in January, playing a scenario in which he was the new Astros manager and students took turns asking him three questions. Then he gave them feedback on the questions they asked. He’s very involved. 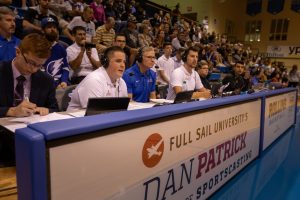 The Dan Patrick School of Sportscasting at Full Sail University prepares its students for both on- and behind-camera work.

As for me, this is my passion. I like being the general manager of the team, kind of overseeing everything. When I got laid off at ESPN, I started my own talent-coaching business. Dan heard about it, and that in part was one of the reasons he asked me to come down and run the program. To me, this program is just kind of taking what I was already doing and putting it on a much larger scale. I’m in the classroom all the time. Between our 15 instructors, we’ve got 300 years of industry experience. We just believe that what we’re teaching is the best way.

Patrick got his start on radio. How important is audio in the curriculum?
It starts for me with [students’] vocal capabilities. We have three classes that are specific on vocal training, and those are overseen by a voice coach. From that standpoint, we spend a lot of time on just how to maximize [students’] speaking ability. We have a couple of classes that deal with podcasting. When we talk about vocal stuff, we do remind them it’s harder because, when you’re in front of the camera, you can make a facial expression or make a gesture that helps convey the point you’re trying to get across. On radio, it’s a lot harder to put all those things into the sound of your voice.

What will be the role of the sportscaster in the sports media of the future? What is the sportscaster of the future going to be?
Streaming has changed the game. Ten years ago, all the niche sports wanted to get themselves on ESPN2 at 4:00 in the morning, just to say that they were on broadcast television. Now they just stream stuff.

I think that speaks to the way in which the world is [changing]. We’re teaching the primary skills, how to be a good on-camera performer, and you can take that anywhere, whether it’s the weekend sports anchor or a news reporter.

I think what’s changing is the opportunity in all the different places where you can do it, but live sports is never going away. That’s why leagues like the AAF and XFL started up: people just like to watch live stuff. As long that’s going on, sportscasters are always going to be around. And the things that we’re teaching are always going to be germane and valuable.