The live-production packager will handle 100+ games this year

For the ninth consecutive season, Rush Media has a massive MLB Spring Training presence at both Arizona’s Cactus League and Florida’s Grapefruit League. The live-production packager will be responsible for more than 120 games for 13 major-league teams over a five-week period, providing production trucks, dedicated staff, and hundreds of freelancers.

“As we enter our ninth year [at Spring Training], it has certainly evolved just by the sheer number of networks and teams we work with and the number of games we are doing,” says Rush Media Companies CEO Tim Eichorst. “As in any production of an MLB-level event, the production bar – and expectations – is very high, and we take that extremely seriously as we represent the team, the network, and their mutual brands. We are very proud that we can accomplish that with consistency over such a condensed period of time.”

With packages to suit the client, Rush provides the production unit and technical crew for all 13 teams, as well as the production crew (producer and director) for several of them. 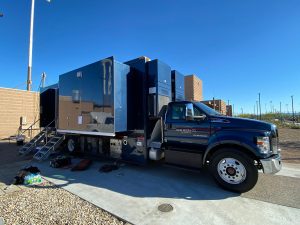 “Florida, being much more spread out, does not allow for as much sharing of resources,” says Eichorst. “And you certainly have more weather to deal with.”

“Arizona is a much different situation [from Florida],” Eichorst points out, “with all teams playing within the Phoenix Metro area and with much more predictable weather. In addition, a number of teams share Spring Training facilities, which allows for the ability to work with both teams at the same venue throughout the month on an almost daily basis.” 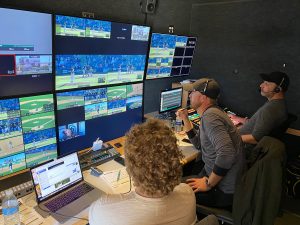 As many as 25 full-time production and technical staffers are part of Rush Media’s Spring Training package.

Eichorst says that, while the number of productions has expanded exponentially over the past nine years, the size of the shows has remained relatively consistent as the networks look to remain efficient with costs and resources. The majority of the games are produced with five manned cameras and two replay operators, with some shows expanding to seven cameras and additional audio to include a field reporter.

In both markets, Rush Media works with other providers to share cabling resources at Spring Training venues that are not built with any pre-installed television infrastructure — and there are quite a few.

The Challenge of Crewing During a Busy Season

Over the course of Spring Training, Rush Media will deploy as many as 25 full-time production and technical personnel, as well as 18 full-time engineering crew. In addition, more than 100 freelancers will be deployed across Arizona and Florida.

In Arizona, Rush Media collectively crews with Burke Brothers, Program Productions, and TRO, supplementing with Rush staff when needed. Eichorst also cites the company’s relationship with IATSE Local 748 as “extremely pivotal to our overall success in Arizona. They have been an invaluable partner to Rush over the years.”

The sheer number of pro games being televised during March can make it difficult to find enough qualified technical and production personnel — a challenge magnified in markets where NBA and NHL teams are also playing. 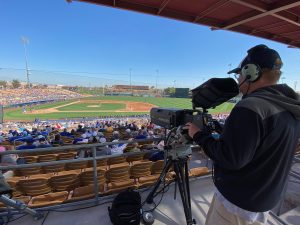 Rush Media partners with local crewers to supply camera operators and other personnel for Spring Training.

“Technical crew is mostly concentrated in the major markets,” Eichorst notes. “So dealing with crew travel to the more remote areas does create a level of complexity. In addition, [because] we are all competing for the best local crews that can execute at the MLB level, it does become a challenge not just for Rush but for everyone else as well. Fortunately, we have our own production staff that we can use to fill in where needed, that can execute at the MLB level and to our clients’ satisfaction.”

Although Rush Media has plenty on its plate during one of the busiest periods on the sports calendar — also producing more than 100 college basketball and hockey and MLS and USL soccer events — the company has become a go-to production for MLB teams each spring.

“We are extremely proud [to be part of Spring Training],” says Eichorst. “It is one of the most challenging things we do. To deliver on that, with the high expectations of an MLB quality show, is a very rewarding feeling for all of us at Rush, but having the experience of doing it for so many years does play a big role in our ability to grow with it.”