Sports Graphics Forum: How Graphics Design Adapts in the Age of OTT

Broadcast graphics in a linear setting is nothing new. If anything, the process has only gotten better with the adoption of augmented reality. As far as OTT destinations are concerned, graphics is still relatively in its infancy. Although many networks are still figuring out ways to incorporate engaging and informative graphics into their digital properties, some are submerging themselves in the depths of this difficult crossover.

At the recent SVG Sports Graphics Forum, executives who are knee-deep in the rising tide of OTT provided first-hand accounts of ways that they are handling the transition and offered advice for anyone willing to make this leap. 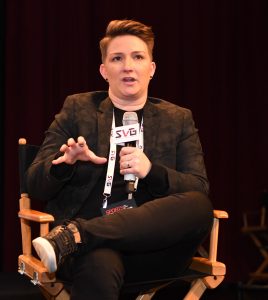 Disney Streaming Services’ Deb McGuffey explains how to manage workflows for different outlets and how to incorporate fan feedback into graphics design.

Deb McGuffey, marketing design director, Disney Streaming Services, on the exponential growth of ESPN+ and how a bigger staff helps with the company’s design choices:

The biggest success of the year for ESPN+ was the deal that we now have for UFC pay-per-view. We’re becoming a medium-size team now. When we first launched ESPN+, there were three people in the department, and now we’re around 30 people, so we’ve grown quite a bit. We touch everything from social media to landing pages to linear spots as well.

Lehmann: It was a very difficult challenge, building everything from scratch. Even after launching two years ago, we’re still tweaking and evolving the project. We’re continuing to learn new things every day to keep doing better. We realized that people watching five minutes or less are digesting breaking news or updates on mobile phones. 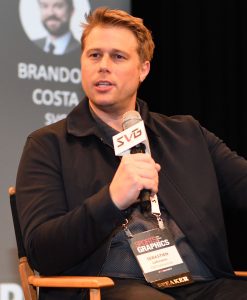 CBS Interactive’s Sebastien Lehmann previews the company’s strategy for optimizing the mobile-viewing experience in the age of legalized sports betting.

We tried to design everything for television but also kept in mind the smaller screen’s specificities. When you design, you need to take everything into account. We are able to be a bit more aggressive while also staying inside [the viewing dimensions of cellular devices]. For example, since we have a lot of fantasy and betting data, we need to avoid a narrow font that would make it hard to read on a small phone or smaller details that would look very nice on television but confusing on a phone.

Bedoya-Pedyna: If I had to choose one of the biggest challenges, it would be font for vertical video. The design of a font is usually very wide, so you’re always searching for a smaller font for a longer word that can fit the width of the cellphone while still looking nice.

For scenarios [like SportsCenter], it’s an entirely different beast. For instance, with radio packages with storytelling or linear television, there is an entire production team on that end of the spectrum, but then Snapchat has their own say on what they want. I have to educate, learn, and be a mediator for both parties. After hearing the information from both sides, we need to come up with a solution that will keep our directors happy, producers for linear television happy, and the viewers happy.

Bedoya-Pedyna and McGuffey on managing specific workflows for different social-media outlets:
Bedoya-Pedyna: If I know where this [digital] show is going to end up on what specific platform, that’s the best advice that I can get in the beginning because then I can account for all of the different changes. Plus, platforms are always evolving, so those specifications are going to evolve, too. All we can do is adapt, know that information, and just go out and use it. 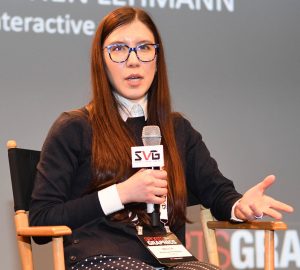 When you have all of the linear assets, building becomes much faster, but, on the other side, for projects that are only for social media, you become a bit of a producer. I’ll work closely with the talent and tell them to change the script a little bit because, graphically, it will look better and you’ll attract more viewers. There’s a lot more that you have to do, but it comes with more creative freedom.

McGuffey: We have a really good project-management team, so they help us a lot. If we’re designing an original in-house campaign or something for the UFC and it comes time to develop the key art, we have to keep in mind that this has to look good not only on multiple screens but also [for] different social destinations. For the [Conor] McGregor fight, we produced 150 assets alone in all different sizes. That’s a big task for a normal campaign.

McGuffey on taking fan feedback into consideration and learning from past packages:
The way that they get feedback from consumers is different. When I was at ESPN and we launched a package, the first thing I did was check Twitter. When we launch a campaign, we may have an A and B test, where we put everything out there, see what is getting more responses, and then adjust accordingly.

Lehmann on the future of mobile viewing, including legalized sports betting and how that will change the integration of visual statistics:
The main problem is that we always want more content and we need to be able to read that on a mobile phone. The challenge is huge, but we’re continuing to evolve and make a lot of elements that are more dynamic with more content.

We’re going to add everything we can towards the legalized–sports-betting space and make sure that we’re giving fans advice to win money. It’s a huge challenge, but we’re pushing to be organized in the way that we display [the information] during certain times of the day.