XFL Audio Gets Up Close and Personal

The XFL is back, and it’s getting better traction on television than in its 2001 iteration, on which NBC pulled the plug after a single season. This time, the revived XFL, still owned by WWE entrepreneur Vince McMahon and broadcast on Fox Sports and ESPN, logged viewer numbers comparable to those of the PGA on NBC and ahead of NCAA and MLS numbers. And substantial credit for that performance is attributed to the XFL’s ubiquitous and intimate broadcast audio, which might be a preview of what’s to come for sports sound on television.

“I’ve never seen the audio be this important, this much of a hook,” says Dan Bernstein, the A1 for ABC/ESPN’s Saturday XFL games, who’s paired with submixer Mark Skipper. “The audio is the big thing that sets the XFL apart. It’s a tool, but it’s also the ethos of the league: they want the audio to drive the interest level.”

There is plenty of sound to use for that. Four players on each team are outfitted with RF microphones, provided by CP Communication, to capture in-game audio during plays. Mics are always allocated to quarterbacks and centers, with a third offensive player sometimes wired, along with one defensive player. Ahead of plays, viewers hear team coaches wirelessly calling plays to the quarterbacks’ helmet headsets. Between plays, sideline reporters question coaches and players using handheld microphones, while booth commentators chatter and open mics both on cameras and positioned in front of the stands pick up crowd and nat sounds. And then there are the four wireless parabs facing the field.

It can get cacophonous. Bernstein, who helms the sound for Saturday ESPN games, and A1 Joel Groeblinghoff, who mixes the Sunday games, and their respective submixers, Skipper and Justin Blackwood, used a preseason game to suss out the management of all of this audio.

“The submixers get all the camera mics, the parabs, the Skycam mic, and the handhelds, and they use the players mics as effects mics,” Groeblinghoff explains, adding that they are also taking input from the director and producer during all of this. “All the rest, such as the officials’ mics, the main mixers get. Anything comms-related [and] coach mics goes to the main mixers.”

In fact, comms, managed by Bexel, become another source of both audio and audio management for the games. (ESPN has direct access to the XFL’s coaching comms system, provided by Riedel Communications, and has a four-wire intercom circuit so that announcers and the production truck can have two-way communication with coaches during the game.) 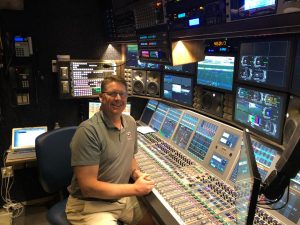 A1 Jamie McCombs: “We’ve been trying to identify the players, see which ones might talk a little more on the field and on the sidelines, so we can get a little more behind-the-scenes through what they’re saying.”

“For the player-microphone integration, we certainly rely on the CP vendor onsite to be in constant communication with us about the microphones. [In] the NFL model, we just get a feed from them and never talk to them,” says Bernstein, noting that the broadcaster also gets to eavesdrop on officials’ headsets as they rule on close plays before they announce their decisions. “They’re working with us as sort of an extension of the broadcast for the player-mic portion.”

Notes Groeblinghoff, “It’s a much more collaborative effort between [the mixers] and comms on these games. It’s quite a network [of sources] that has been put together. It’s all-access all the time.”

Players, Coaches Get Used to the Mics

What comes out of the sometimes tumultuous clamor of XFL audio is a level of intimacy and insight rarely achieved in live sports coverage. Although coaches still reflexively obscure their lips with their playbooks while calling plays, Bernstein says more and more coaches and players have dropped concerns about being listened in on.

“We’re talking to players during uncomfortable moments right after they happen,” he points out. “I think that it actually makes it really interesting because you have to watch the players and even the coaches in those moments manage their emotions. Some of them, at least, have reached the point where they don’t think about the microphone anymore. They’re just interested in being and showing who they are, regardless of who’s in their face. And that makes for some [interesting moments].”

(Several profanity delays are inserted into the broadcasts. For instance, ESPN has a 5- to 7-second delay to its facility in Bristol, CT; ABC adds another 5-second delay for its transmission from New York.)

Managing all this audio into a coherent narrative is a work in progress. Some limits on access, such as in locker rooms, are being considered. On the other hand, the search for new sonic sources is ongoing.

“We’re going to try putting a wireless mic on the kickoff tee next week,” says Bernstein, noting that a Q5X transmitter will be used because of its small size. “We’re trying to fill every void that we can, if there is such a thing on this show.”

Fox’s XFL Game
Fox Sports is using much the same wireless microphone and comms infrastructure, provided, respectively, by CP Communications and Bexel, as ESPN. And Jamie McCombs, A1 on Fox’s weekend games, similarly has a virtual playground full of audio and the challenge of managing it all.

“[In miking] up to eight players, four from each team, the first challenge was which ones to mike [and] when,” he says, noting that it’s not unusual for teams to change quarterbacks midgame, which means that often the center and occasionally a running back wear the offensive mics. Middle linebackers are usually chosen for that role on the defensive side.

“Early on, it was mostly players on the [scrimmage] line, so you can really hear the crunching that comes with that,” he adds. “But now we’re into the fifth week, and we’ve been trying to identify the players in the league, getting to know them and see which ones might talk a little more on the field and on the sidelines, so we can get a little more behind the scenes through what they’re saying.”

McCombs, who has mixed NFL and Big Ten games for Fox Sports, says the approach to miking players and coaches is similar to that used for the NFL’s enhanced audio but can vary according to circumstances.

“Sometimes,” he explains, “we’ll put the mics on the back of the shoulder pads of the centers to try to pick up more of what the other quarterbacks are saying,” explains McCombs, who works weekly with submixer Matt Rossetti and shares weekend duties with A1 Matt Victory and submixer Dave Nardelli. “I like to have the front [louder], to hear the crunching and things like that. But, if they change one of the [wired] players midgame, then we have to reconfigure [the mix].”

One of the most interesting innovations in the XFL is the amount of field audio going into the PA system, letting fans in the stands also enjoy the heightened access to sound.

“We started out just sending our parabolic microphones into the stadium mix,” McCombs explains, “but it wasn’t quite what the XFL was looking for. So we moved on to player microphones, which works much better. Last week, in St. Louis, we were actually putting a middle linebacker into a special mix that goes just to the stadium PA, putting it in for the crowd for couple of plays. When there was a good hit, you hear the reaction in the stands.”

The Sound of the Future?
Pundits are noticing the new league’s audio. Bleacher Report believes the expanded access to coach and player sound will “add to the drama and intensity of professional football.” Thus, the XFL’s audio experience could have implications for sports on television going forward, although its kind of experimentation is feasible only because of the complete freedom the league gives the network audio mixers.

Broadcast-sports audio has made enormous strides in recent years, from pulling cockpit audio from auto racing to listening in on strategy conferences around golf holes on the putting green. The XFL’s level of sonic access is a palpable next step.

“What we’re doing,” McCombs suggests, “is kind of saying, Look how much further it can go.”