PGA TOUR, NBC Offer Every Shot Live for First Round of The Players Championship

Before tournament cancellation, subscribers could feel like they were onsite

The Players Championship managed to get in only one round at TPC Sawgrass in Ponte Vedra, FL, last week before being shut down out of concerns related to COVID-19, but that one round managed to make some history. PGA Tour Entertainment and NBC Sports combined for a production and distribution effort that gave golf fans a chance to do something they had never done before: watch every shot by every golfer live.

The service was available through the NBC Sports Gold app with a PGA TOUR subscription. At its height on Thursday, according to Scott Gutterman, VP, digital operations, PGA TOUR, 24 concurrent streams were available and designed to make fans feel like they were inside the ropes. 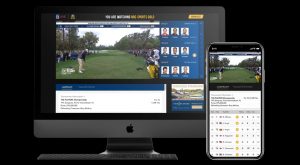 Every shot of the first round of The Players Championship last week was available live via NBC Sports Gold.

“We have a tremendous amount of content that doesn’t make it to fans, as we have 75 balls in the air at the same time,” he says. “There is a huge demand from the fans to have more coverage.”

Figuring out how to do that began with a basic question: how can you practically produce the live coverage and also make it easily consumable by viewers and fans? Do you offer a dedicated channel for each golfer, for each hole? Or follow each group?

Ultimately, the decision was made to dedicate a Hawk-Eye operator to each group.

“Having the operator stay with the group,” says Dukes, “gives them a chance to get to know and memorize the players in their group.”

In an interesting twist, the operators were not located in the production compound in Ponte Vedra. In fact, they weren’t even in the U.S. They were at Hawk-Eye offices in Basingstoke, UK. Dukes says the Hawk-Eye interface allowed the operator to simply hit a button to switch all the camera feeds from one hole to the next. Every hole has a minimum of three static cameras available to the production teams, besides the camera feeds that NBC and Golf Channel use for coverage. Shotlink data was also incorporated with each feed, along with hole flyovers and trace.

As Thursday’s round developed, more groups were on the course, and there was a time when as many as 24 groups were playing. Each had a dedicated operator.

A fiber connection provided by The Switch allowed proxy video of camera signals to be sent to the UK, where the operators made the cuts, which were then matched up with the full-resolution version for output to viewers. In addition, three pit bosses in Ponte Vedra monitored all the streams and could communicate with pit bosses in Basingstoke.

The effort was only the beginning of what hopefully becomes a yearly tradition not only at The Players Championship but potentially other events.

“Personalization is the key driver for everything in media,” says Dukes.