Preparing for the Return of Sports: A1s Ready To Mix Live Broadcasts in the Age of Empty Arenas

The precipitous shutdown of most major-league sports three weeks ago, including the NCAA’s iconic March Madness series, took almost everyone by surprise. But, even as the leagues were devising their doomsday scenarios, the frontline audio troops were working on tactical solutions for making the games happen in empty arenas — efforts that will likely still pay dividends: although the events are canceled for now, the solutions the audio teams have devised will be ready when sports return to the air, likely with fan attendance limited until the pandemic has significantly abated.

Phil Adler, who had been scheduled to mix the First Four games of the NCAA’s March Madness for Turner’s TruTV in Dayton, OH, describes what that might have sounded like. 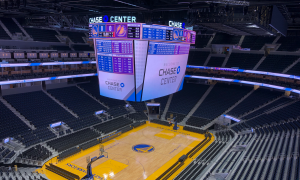 Audio mixers have developed strategies in case attendance is limited when sports first return to television.

“If it’s a close game, that’s when you’re really going to miss the sound of the crowds,” he says. “We’ll have lots of [court] effects and the announcers but minimal ambient sound. There’s not much I can do about that.”

Mixing NCAA games involves fewer audio sources than NBA games offer, because college basketball doesn’t allow players or coaches to wear microphones. And piping in prerecorded ambient and crowd sounds is out of the question, Adler points out: “We’re here to document a live event; we’re not making a film. If there is no one in the stands, then you can’t fake it. It’s a national [news] story.”

Adler says he has had to deal with crowds of various sizes over the decade or so that he has mixed these games, so there is some precedent for dealing with sparsely populated echoic venues. Crowd microphones would still be deployed, to provide at least some ambience enveloping the more focused court effects. However, he cautions, their placement has to be carefully considered.

“If they’re too far away, like the two we usually have on the high-center cameras, too much of the court sound can get into them because they’re not being filled with the crowd noise, and that can cause delay problems with the microphones that are picking up the court sounds directly,” he explains. “Instead, we’ll move those mics to the slash-corner cameras, which are on more like a mezzanine level and closer in.”

Veteran NCAA A1 Wendel Stevens’s strategy for large reverberant arenas is “less is more,” dialing back his overall microphone count with the goal being to hear fewer discrete sounds.

“My thought is that players and coaches will be too easily heard and understood,” he says, “creating specific bits of audio that could distract from the game instead of contributing to a larger ambient bed around it. In addition, dialog from the game could be ‘colorful’ and might compete in the mix with announcer dialog. I think I still have to put out rear [surround] mics to give the show some depth, even though they’ll be pointed into an empty bowl. But we need something back there to swirl into the mix.”

The coronavirus pandemic has compelled broadcasters to radically rethink how sports audio may have to be mixed on television when the crowd-sound element is not available.

“I don’t think we mixers realize what a [foundational] ingredient the crowd noise is to a mix,” Stevens observes, noting that the crowds provide both a palette of individual elements that mixers can emphasize when appropriate and a flexible sonic mortar that acts like a grout around the many other sound elements in a sports mix, helping hold them together. In addition, crowd sounds actually mask the mix process itself, making the audio experience seamless and transparent and helping create the sense that the home viewer is there in the stands.

“We actively mix to pull out game sounds, with the crowd noise helping us hide all the mixing going on,” he explains. “It will probably be much easier to hear the actual mixing of sources without something there to smooth it over.”

Wiring athletes for sound has added a huge new dimension to sports broadcasts in recent years. However, that intimate audio may depend more than many realize on being part of a larger, more complex mix.

“I believe mixers will need to be more cautious with player mics,” opines Sports Broadcasting Hall of Famer Fred Aldous, who mixed NFL and NASCAR in a long career. “Without having the crowd as a base to mix in and out of, player mics have the potential to sound unnatural and too dry in the mix. There is also a greater potential of hearing more language that is not suitable for broadcast by not having the crowd to mix against and bury the unwanted language.”

Uncertain Future
No one knows how this singular situation for sports on television will turn out, but Aldous sees two sides in possibly broadcasting with empty seats.

“From an audio perspective,” he explains, “a positive by-product of not having the contamination of loud PA systems and loud crowd is that the sound of the event should be phenomenal; the mixer should be able to pick up the nuances of the sport that we would not normally get.

“On the negative side,” he continues, “I am a fan of big, loud crowd at an event; it helps bring the energy level up for the players as well as bringing that excitement to the viewing audience at home. When I mix an NFL game, I prefer a louder crowd to mix in and out of, making the broadcast more exciting. If the crowd is not that into it, it makes it more difficult to bring the excitement to the viewer, albeit it allows the mixer to get better sounds of the event. It truly is a compromise and a delicate balance.”

The lack of an enthusiastic crowd could, he speculates, even negatively affect the performance of the athletes themselves. And all the A1s recognize that they are facing a historically unique situation.

“As with everyone involved,” says Stevens, “it is completely new territory for me. Flexibility and cooperation are key. This situation will evolve. TV will adapt as needed.”