The idea of a prosperous U.S. soccer league was a pipe dream at the turn of the 21st century. Now, in its 25th season, Major League Soccer (MLS) has spread across the country, settling into previously unthinkable places. One of those places is Nashville, and, although the momentum of Nashville SC’s inaugural, top-flight season has been stalled by the coronavirus pandemic, the team is developing fresh ideas to keep the wave from cresting.

“We’re trying to find ways to keep our broadcasters relevant,” says Brad Baker, senior director/executive producer, Nashville SC. “They’re all creative people, so they’re doing a good job of helping [us] come up with ideas for content even if it doesn’t involve them.”

With any great team comes great traditions that both hardcore and casual fans can latch onto, and, in a span of a few short months, the franchise is tapping into the eclectic culture of its city through the vision of Nashville SC CEO Ian Ayre, who was previously CEO, Liverpool FC. 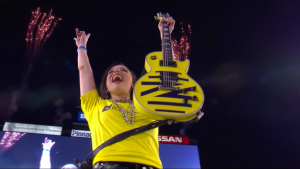 “We’re trying to integrate traditions into the game-day experience,” Baker explains, “so we had Judah and the Lion, a Nashville-based band, write the club anthem, and we had Gibson build us this custom guitar that musicians will riff every game right before kickoff. Lastly, we have a record press in front of the supporters section, and they’re taking the audio file of the goal calls and pressing it into a gold record, so, at the end of the game, the Match MVP gets presented with the record. We hope in 50, 70, or 100 years from now, those are things that are still sticking around with the club.”

From a production perspective, Baker, who joined Nashville SC in December, seamlessly transitioned into his new role. Since Nissan Stadium is the temporary home of Nashville SC, he works hand in hand with David Schindler, senior director/executive producer, event presentation and production, Tennessee Titans.

“I had only three months to get everything up and going, so we had to start from a blank page,” Baker notes. “We obviously didn’t have any kind of in-stadium show, but we also didn’t have anything on the broadcast side. Luckily, the ownership group here has built a dream team of front-office people. [My support staff] was in place to help set me up for success.”

After arduous work in the offseason, Baker and his production crew took their seats in the control room for their historic first home match on national television on Feb. 29 against the 2018 MLS Cup Champions, Atlanta United FC.

“We always talked from the beginning about there being Game 1 and then Games 2 through 17,” he says. “It was magical. People from as high up as MLS Commissioner Don Garber to those in the media like ESPN’s Scott Van Pelt and Taylor Twellman and those on the Fox broadcast talked about how awesome the experience was and how excited they are as people who’ve been covering MLS for a long time to see Nashville join the league. That was cool, and whatever small role I got to play in that, was humbling and extraordinary.”

The coronavirus pandemic has made almost every business in the U.S. adjust its workflows. In the case of in-venue production, normal person-to-person contact inside a control room has been replaced by laptops and webcams with living-room and kitchen backdrops.

“It has been a mix of everything, but we are using Zoom quite a bit,” says Baker. “The content team is doing a really good job of putting everything into Google Docs so all the stakeholders can see it. We’re trying to do everything we can to just stay connected to one another.”

Those Zoom calls have generated a treasure trove of new and engaging ideas, but the daily conference calls come with another opportunity. Although there’s a noticeable downside of not being able to put your skills and ideas to the test, the time being spent away from the stadium has given the crew a new sense of time that they wouldn’t normally have during a hectic midseason schedule.

“I’m sure every team felt [this way] to a certain degree,” says Baker, “but, with our never having done [a local broadcast] before, it was the absolute basics that we all kind of had to get used to. I’ve done in-stadium shows in MLS before but not with any of these people; some of them have done MLS shows before but not with us; some of them had only done baseball and weren’t used to producing soccer. There is definitely a silver lining in being able to take a breath, really think about the show we just did, look at our run of show, and put some time and thought into it and not just be reactionary about everything.”

A Mixed Bag: Esports Tournaments, Player Messages Populate Social Media
Despite the lack of interaction, Nashville SC is continuing to connect with its new fanbase. As with other sports teams, social media is the most effective mode of communication, and the club is doing its part to serve up content that caters to different interests.

For fans who are enticed by esports, the team’s Instagram handle is using the IGTV feature to simulate previously scheduled matches on the FIFA 20 pitch. From the esports community, Nashville SC’s Cormac “Doolsta” Dooley took on the Columbus Crew’s Graham “Skamzz” Ellix. In an added wrinkle, on-air talent Jamie Watson recapped the highlights when the match was concluded.

With viewers attached to mobile devices, the digital team is getting their creative juices flowing for cellular applications. Most notable is #WallpaperWednesday, a weekly phenomenon in which graphic designers of multiple professional teams develop brand-new templates that fans can use on their phone. On March 25, the club supplied customized backgrounds for Twitter followers that interacted with the tweet. In addition, they injected local celebrities into the mix with wallpapers for Titans quarterback Ryan Tannehill, Predators defenseman Roman Josi, and country-music legends Dolly Parton and Tim McGraw.

Like most of the population, Nashville SC players are keeping busy during this time of sheltering in place. On social media, a multitude of footballers are producing content from the comfort of home, including Walker Zimmerman, Dax McCarty, Joe Willis, Taylor Washington, and Dominique Badji.

Magic in Music City: Nashville SC Looks to Season Reopening
To say the least, 2020 has been a rough time for Nashville. From the natural disaster of a tornado that ran through the city and Middle Tennessee in early March to the current medical situation that has a stranglehold on the world, the city is in dire need of hope. When the gates of Nissan Stadium eventually open on match day, the genuine, determined, and vibrant attitude of Nashville SC can be a signal of the return to normalcy.

“People move here, and they immediately engross themselves with everything that’s Nashville,” says Baker. “In the immediate days after the tornado, there was so much community involvement, and everybody wanting to help each other out. Whenever Game 2 happens, everybody is going to be ready not only to get back into football but to embark into an activity that celebrates the city. I want them to feel like we’re all able to go back to normal, so let’s celebrate being able to humanly be together. I’m really looking forward to it, and I think it’s going to be an extraordinary day.”