While NBA stars are giving esports a go with the NBA 2K Players Tournament, the two-year-old NBA 2K League has stayed busy with its NBA2KL Three for All Showdown over the past two weeks. Spurred by the coronavirus pandemic, the NBA 2K League production team devised a fully remote workflow to produce the online 3-on-3 tournament. In just one week, the team worked with LiveCGI to devise a production model allowing nine crew members and casters in five states to produce the live-streamed shows remotely from their homes. 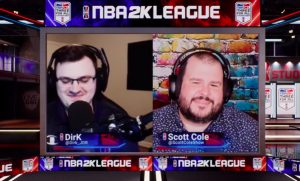 NBA 2K League enlisted LiveCGI to create a virtual-studio system for remote production of the NBA2KL Three for All Showdown.

“The idea for the tournament came together internally in just a few days,” explains Matt Arden, head of content and media, NBA 2K League. “Then we had only about a week to figure out how to do a broadcast. We had to invent a broadcast solution that would bring together nine living rooms in five states – all on public Wi-Fi – and we simply did not have a model for that since we are used to having everyone at our broadcast studio. We also needed to find a way to corral more than a hundred streams into a central hub that exists in the cloud and then develop a [virtual] control room to turn all that into a fully synced-up broadcast. And there was no room to fail: we had to put on a broadcast.”

Building a Live-Production Workflow From Scratch — in Just One Week

In the online 3-on-3 tournament, fan-organized teams, top female 2K players, and social-media influencers competed in the NBA 2K20 MyPark game mode for the chance to play against NBA 2K League teams and a share of a $25,000 prize pool. The NBA 2KL Three for All Showdown’s first stage (March 27-29) and second stage (March 31–April 3) were live-streamed on the NBA 2K League Twitch and YouTube channels in a whip-around format, with the broadcast switching from one game to another throughout. 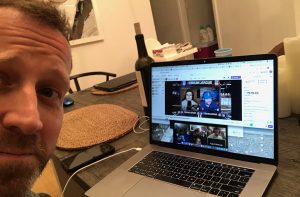 NBA 2K League’s Matt Arden oversaw the NBA2KL Three for All Showdown from the comfort of his home.

“The tournament’s a really great way to engage with our fans,” says Arden. “In these unprecedented times, we wanted to make sure that we were being responsible and practicing social distancing but also staying connected.”

The NBA 2K League was already ahead of the curve in terms of at-home production, having worked with LiveCGI to develop a multi-site remote-production model leveraging a virtual studio for the NBA 2K League APAC Invitational in January. Arden and his team returned to LiveCGI to see what it could whip up for the Three for All Showdown. 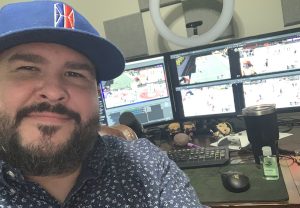 NBA 2K League’s Scott Cole both served as on-air talent and selected the game feeds incorporated into the live stream.

“We called our friends at LiveCGI and [inquired] about their cloud solution, which was a postproduction solution for the most part, to see if it could be used as a live-broadcast solution. Could we tweak the software to bring it into a multichannel operation that looks like NBA League Pass? What we were able to create was a layer cake of compositors for TV switchers, graphics engines, and streaming technology.”

Inside the Production Workflow: A Multisite Group Effort

All the live gameplay from players’ homes took place across Twitch, YouTube, and Mixer from either X-Box or PS4. These game streams were fed to NBA 2K League Lead Caster Scott Cole, who had a broadcast pod set up at his home in South Carolina. In addition to casting, Cole also monitored the various games and selected the best matches to incorporate into the live stream. 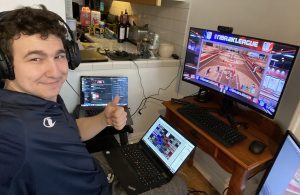 “Scott was the first line of defense,” says Arden. “He was sitting on top of the broadcast bringing in feeds and casting over them from his home in South Carolina and then combining the streams and selecting the best matches for fans.”

Cole was connected to a co-host — either Jamie “DirK” Diaz Ruiz in Chicago or Jeff Eisenband in New Jersey – via Discord videogaming VoIP software.

“There was a heavy lift from the caster side when it comes to monitoring the streams and pulling them into the production,” says Arden. “Normally, the caster is just sitting there and watching gameplay and speaking about it, but Scott had to actively work within the production as well, which was very [unusual for] any broadcast production — esports or otherwise.” 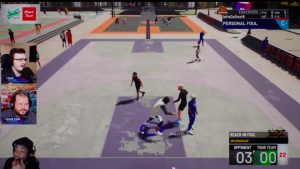 Cole’s live-coverage feed was sent to the NBA 2K League Digital and Social Content Producer Harris Rubenstein in Hoboken, NJ, who fed it into the LiveCGI engine (powered by Unreal Engine) to create a virtual-studio environment. He produced the final program feed featuring the virtual-studio environment and virtual camera moves and was also feeding talent information on what games were coming up next.

“[Rubenstein] was juggling a lot of responsibilities,” says Arden. “He was wearing two sets of headsets. One was to me and the production team in a Zoom channel producing and EPing the show. He also has another headset for Discord, where he can speak directly to talent and also monitor that live feed in real time. And then he was even acting as a broadcast voice through Discord at times. When Scott and Dirk weren’t sure where we were going next, he would chime into the broadcast, so he was literally directing our talent as a voice of God.”

The final program feed was sent to the AWS cloud via RTMP and pushed out to YouTube and Twitch.

Whip-Around Storytelling: Finding Compelling Action in a Sea of Live Games
The brackets for both stages were spaced out by four hours, with several best-of-three competitions happening at once within each bracket. To navigate all the concurrent games, the production team set up a Slack channel and constantly updated URLs for the live stream of each game. Cole would swap back and forth between various games, searching for the most compelling action. 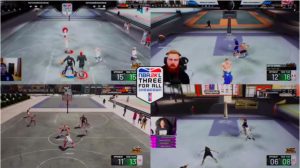 The live stream would swap back and forth between various games, searching for the most compelling action at any given moment.

“We were being very mindful of whipping around for the best possible coverage,” says Arden. “We were focused on two things: finding the best competition and highlighting really great personalities. There were some great stories to tell, so we were trying to follow exciting gameplay and also create a narrative around the personalities.” 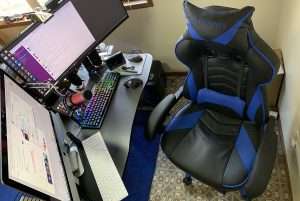 He adds that the production workflow changed dramatically throughout the tournament, with elements like special guests, new graphic templates, and new audio techniques added on an almost daily basis.

“Every single day was a new learning opportunity,” says Arden. “I’m incredibly proud of our team and how inventive they have been. We’re a small group — only about 11 of us — and we’re all sequestered in different places. The team has been incredibly quick on their feet and quick to pivot. Every single night, we found a different way to broadcast and move the workflow forward. I couldn’t be more proud of the team, and I’ve never seen a team move as quickly as this one has.”