NHRA Lives in the Cloud for At-Home Editing, Production of Racing Content

As the U.S. sits at a prolonged red light due to the coronavirus, the National Hot Rod Association is still seeing green. Despite being shut out of NHRA’s Glendora, CA, headquarters, the production team has kept its foot on the gas pedal in terms of content creation, thanks to an at-home workflow that features cloud-based editing and storage, video recording through Skype, and equipment from NewTek and Grass Valley. 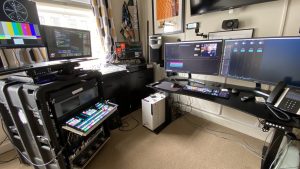 “When NHRA built a studio in Glendora, we decided to go with a NewTek TriCaster 460 and TalkShow box, but, when I saw what San Francisco did [to prevent the spread of coronavirus] a few days before Los Angeles went into lockdown, I went up to the office and took the equipment as well as a mixer,” says Rob Hedrick, director, postproduction/supervising producer, NHRA. “The workflow has been amazingly simple, and we’ve been cranking out content like we’re still working inside of our studio.”

From In-Studio to At-Home: Gradual Move to the Cloud Minimizes Obstacles

In the current circumstances, an actual “at-home” workflow might seem lucky or coincidental, but the NHRA team would probably consider it a product of meticulous planning. Prior to the start of the pandemic, the drag-racing organization was looking to change production from relying heavily on onsite, in-person interaction to a practice that is more agile and adaptable.

“We had already started transitioning to cloud-based editing with Bebop Technology after last year’s NAB and finished the process by getting our last editor in the cloud a month before [the pandemic] started happening,” says Hedrick. “We sent people home with their desktops and/or Teradici Zero Clients beforehand.” 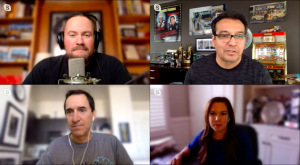 At a time when many sports-video–production professionals are swimming in uncharted waters with hardwired systems, the NHRA team is already familiar with an untethered infrastructure. In addition to the pair of NewTek products, there is the Grass Valley Kula production switcher. On the intangible side of the operation, BeBop Technology’s editing interface is powered by AWS’s cloud-based services, and the crew can manipulate footage or upload 20 GB-100 GB of files through any given web browser that can access Sony’s Ci storage platform.

“The biggest transition that we had was that most of our editors are used to working on a Mac, but, since it’s up in the cloud through AWS, it’s PC-based,” Hedrick explains. “Our editors have adapted quickly, and the render times are quicker since it’s in the cloud.”

The company’s steady change in philosophy has turned a Los Angeles apartment from a humble abode to a fully functioning fortress of content. Alongside Hedrick, figuratively speaking, only one other editor is involved in the process. 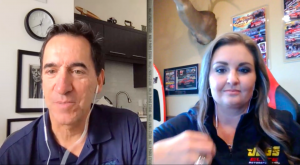 With various kinds of social offerings, there are many digital elements to execute, including four simultaneous Skype calls. Although NewTek TalkShow handles that aspect of the workload, the combined total of traffic and bandwidth over the internet may be a source of constant worry, but, in another stroke of happenstance, the apartment is located in prime real estate for clear and uninterrupted internet connection.

Hedrick had chosen an apartment that’s only four blocks from one of the most densely interconnected data centers in the world: One Wilshire, or LA1, which allows 0-ms ping time. Also, AT&T’s Los Angeles location is right across the street. And, as if that weren’t enough, Hedrick has an extra layer of -redundancy in the form of the apartment building’s 100-kW generator.

The Content Catalog: NHRA Rewind: Live, Driver Interviews Lead Programming Lineup
For fans of the NHRA, there has been no shortage of content to get them through the time spent at home. As Fox Sports continues to push re-aired versions of past races, Hedrick and company are handling the entity’s social-media channels with both short- and long-form content.

On platforms like Facebook, the team has developed a series dubbed NHRA Rewind: Live. For folks who want to relive the action of an old race or hear thoughts from notable personalities, NHRA Rewind: Live has become a two-hour or more program offering a famous drag race that withstands the test of time and voices that fans are used to for an interactive experience. Statistician Lewis Bloom not only joins in on the nostalgia but brings comments from fans into the discussion by monitoring the chat.

Along with these social-media accounts, this content can be seen on NHRA.com and NHRA.tv, the organization’s OTT platform. To get this job done, Hedrick has been patching in talent from across the country, including Bloom in downtown Los Angeles, play-by-play announcer Brian Lohnes in Boston, analyst Tony Pedregon in Indianapolis, and reporter Jamie Howe in Georgia.

Throughout this tumultuous time, fans need constant updates about previously scheduled races and the drivers they follow. To quench their thirst, visual bulletins on up-to-date schedule announcements are released on outlets like Twitter, and, for current information on the participants, drivers have made themselves available to detail, in digestible interview clips, how they’re spending their days with family and loved ones.

In conjunction with the at-home items, Hedrick has purchased several cost-effective production packs of $120 or less: a Logitech camera for Full HD video quality through Skype, an earpiece plugged into a laptop’s headphone jack for proper IFB communication, a lavalier microphone that plugs in to a USB port, and an efficient lighting kit.