ESPN Launches ‘Live at Home’ Remote-Production Workflow for The Jump

When The Jump returns to ESPN on Monday, the entire crew will be working from their homes – marking the first time ESPN is deploying a fully at-home workflow for one of its studio shows. The “Live at Home” remote-production workflow was developed in recent weeks by a committee that featured more than 30 ESPN staffers from the company’s Creative and Studio Direction, Production, Production Operations, Remote Production Operations and Technology departments.

“The goal of the committee was to review the best option for producing studio shows at a high-level, while allowing all of the associated staff to work from home,” Chris Calcinari, SVP, ESPN & ABC Sports Remote Production Operations, wrote on ESPN Front Row. “The ‘Live from Home’ committee reviewed several cloud-based solutions that work well to execute very basic productions, but did not allow for a large volume of video, graphics or animation. The committee quickly turned to several tools that have been deployed in the field and could be operated from afar.” 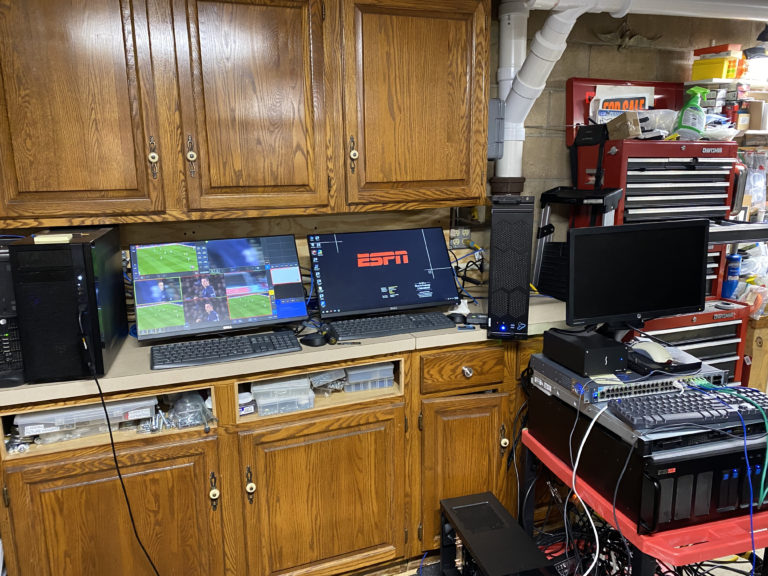 Simplylive developers worked from home to help perfect the workflow that is allowing ESPN staff members to remotely control the ViBox server from home. (Bryan Beck/ESPN

At the core of the “Live at Home” remote workflow is the Simplylive ViBox, which is based at ESPN’s Seaport Studios in Manhattan, but controlled from a staffer’s home in Los Angeles. The ViBox touchscreen production system provides us with the ability to cut/dissolve/wipe between cameras, video and animation sources. It also allows us to store and playback video and insert graphics.

Remote home studios have been built out for The Jump on-air talent with audio/video signals from each home sent over the internet (using the TVU application) to the Seaport Studios for integration into the ViBox.

A Vizrt graphics device is also based at our Seaport Studios and is controlled from Operators’ homes in Middlebury and Southington, CT.

All communications take place using a Unity Intercom app installed on the phones, tablets, or computers of everyone involved, including talent.

Production staff is also able to pull video from ESPN media servers and edit at home.