In the midst of uncertainty, the system integrator remains agile

Since 1982, BeckTV has been responsible for conceptualizing, designing, and building detailed television facilities and control rooms throughout sports. Over the years, it has completed high-profile projects for such clients as Tegna, NBC News, and NBC Sports Regional Networks; professional sports organizations like the Houston Astros and Baltimore Ravens; and collegiate programs like Notre Dame, University of Louisville, and Boston College.

During the coronavirus pandemic, current projects may be experiencing delays in their schedules. To keep the sports-video–production community informed on the progress of systems integrators, SVG sat down with three representatives of BeckTV — Matt Weiss, VP/senior engineer, Eastern Region; Brendan Cline, director of engineering/senior engineer; and Paul Nijak, director of operations/senior engineer — to discuss how the company is handling these unforeseen circumstances.

How is BeckTV continuing to communicate with clients? How is the team adopting new ways to attract new clients?

Weiss: We are continuing weekly project calls with clients on Zoom and over the phone, and we’re also developing what we’re calling a COVID Two Week look-ahead in our scheduling. We have this temporary look-ahead, where we say we’re going to be onsite the week of April 13, but we’re going to look ahead the next week after that to see if it’s safe for our crew to be onsite in the city that we’re traveling to. 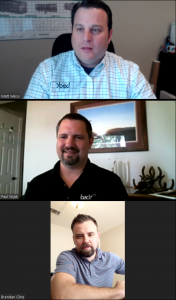 From top: BeckTV’s Matt Weiss, Paul Nijak, and Brendan Cline are doing their part during the coronavirus pandemic.

Cline: Once the announcement was made that NAB was canceled, there was a domino effect that happened on a daily basis where we were trying to adapt, but we couldn’t keep up with it. What we really had to do was tell people that we don’t know what we’re going to see tomorrow. It’s hard to project [what’s going to happen] in a week or two weeks when things are changing so quickly every day.

It’s not just with clients. It’s also about how we communicate and distribute information internally so that we’re all understanding how we’re supposed to be operating and how we’re supposed to be safe and what the company’s plans are. After that, we can ask ourselves what our response will be to our clients. At first, it was based on if we could even get onsite for them and, then, could we get vendors to support or travel to these sites.

You do find new ways to manage your client relations but also your internal relations. Paul and I would just go into each other’s office and talk for an hour every day, but now we have to sort of game-plan a little bit differently than that.

How have travel and operations been affected in the last couple of weeks?
Cline:
Right now, we’re suspending travel unless it’s critical and essential. Since we don’t work just in sports, we’re helping a lot with network news and live broadcasts for TV stations. We’re still supporting the groups of stations that we work for, but a lot of it is done remotely.

You have to look at every single job and try to figure out your level of risk that you want to participate in, because, although we fall into an essential business, we still want to protect our employees and do our civic responsibility. It’s an interesting balance, because every single project is unique and you have to deal with them that way. For TV, they’re going gangbusters and want to keep going. [These networks] need emergency kits or need us to do whatever we can to help them. For the stadiums, they may have stopped, but construction is still ongoing.

Nijak: I was in DC, and everything was shutting down around us. The hotel was going to shut down if the building became less than 5% full. Flying was a nightmare because six flights were canceled. [On one flight,] there were 12 [passengers] going from DC to Detroit, and then there were eight going from Detroit to Austin, of which [three co-workers and I] were four.

If I was traveling a week later, Texas was mandating a two-week quarantine [for passengers] from Detroit to Texas, so I would have had to be in quarantine for 14 days. It was an interesting dynamic in terms of just getting crews home.

What other guidelines are being put in place to ensure a safe working environment for all involved?
Weiss: We have certain staff that might live with an elderly relative, so we don’t want to put them out in the field. It might be safe, and they’re following the CDC guidelines onsite, and PPE [personal protective equipment] is being adhered to. But we don’t want them to bring [the coronavirus] home to their family members, so we’re telling them to not go onsite and to stay at home.

We’ve also sent technicians home with build kits of wiring, so they’re not even at the office doing some of the pre-wire that we would do or cable assembly that we would normally do in the shop. We are limiting in-person contact, so anybody that can work remotely and doesn’t need to be in the office is working from home. 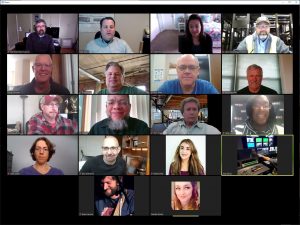 BeckTV is still maintaining relationships through virtual conference calls, like this one on Zoom with a Denver-based client.

Cline: It’s a tough situation where your spectrum of how people are interpreting this is fairly large. We have a lot of young workers, but I make sure to go into the office and make sure they’re following the protocols we want them to follow.

We have about six people in our office in Austin, but we are trying to still build [elements] like racks and do commissioning and other things in the shop. It’s the safest and most controllable place that we know of, but we’re making sure that we don’t have four people on top of each other while doing it, and we’re not staying overnight.

Has the coronavirus forced the company to think differently about how control rooms are constructed? What new technologies can potentially aid remote workflows moving forward?
Cline: It’s too early to know, but live television is not going to go away, and these control rooms are going to continue to be control rooms, with possible remote support for those that are able to do that or some sort of disaster production kit.

I think that working from home is going to be something that changes production, but, in terms of producing a show, you still need things like cameras, wires, and a switcher. Automation helps, and a lot of stations have automation where they want to have one director, one producer, and those are the only people allowed in the building. But I don’t think it changes the entire outlook of how a control room may look.

Weiss: [VP/Senior Engineer] Paul Kast in our New York office had a client that was locked out of a facility, and they were trying to build a show list to do a live remote show. They built it in automation, but the control panel that was on the console was the only element that could load the show. There was no button in the software that would allow them to start the show. Even the manufacturer spent hours trying to figure it out; being able to start a show remotely wasn’t written into the code.

Cline: We’re driven by what the industry wants to do, so, right now, we’re trying to maintain the jobs that we have. We have a lot of clients asking for some changes because they need to change their workflow. But we’re not going out and designing this without a client that’s asking us to do it. It’ll be interesting to see the different requests for changes coming out of this.