Calrec Q&A: Veteran A1 Mixer Phil Adler on How Audio Mixing Has Evolved

Calrec sat down with veteran A1 audio mixer Phil Adler to discuss how he got into the industry, the workflows he’s used over the years, what make sports audio unique in sports broadcasting, technological milestones he’s seen over the years, how he views Calrec products, the impact of second screens on audio, and where he sees the industry headed in the future. 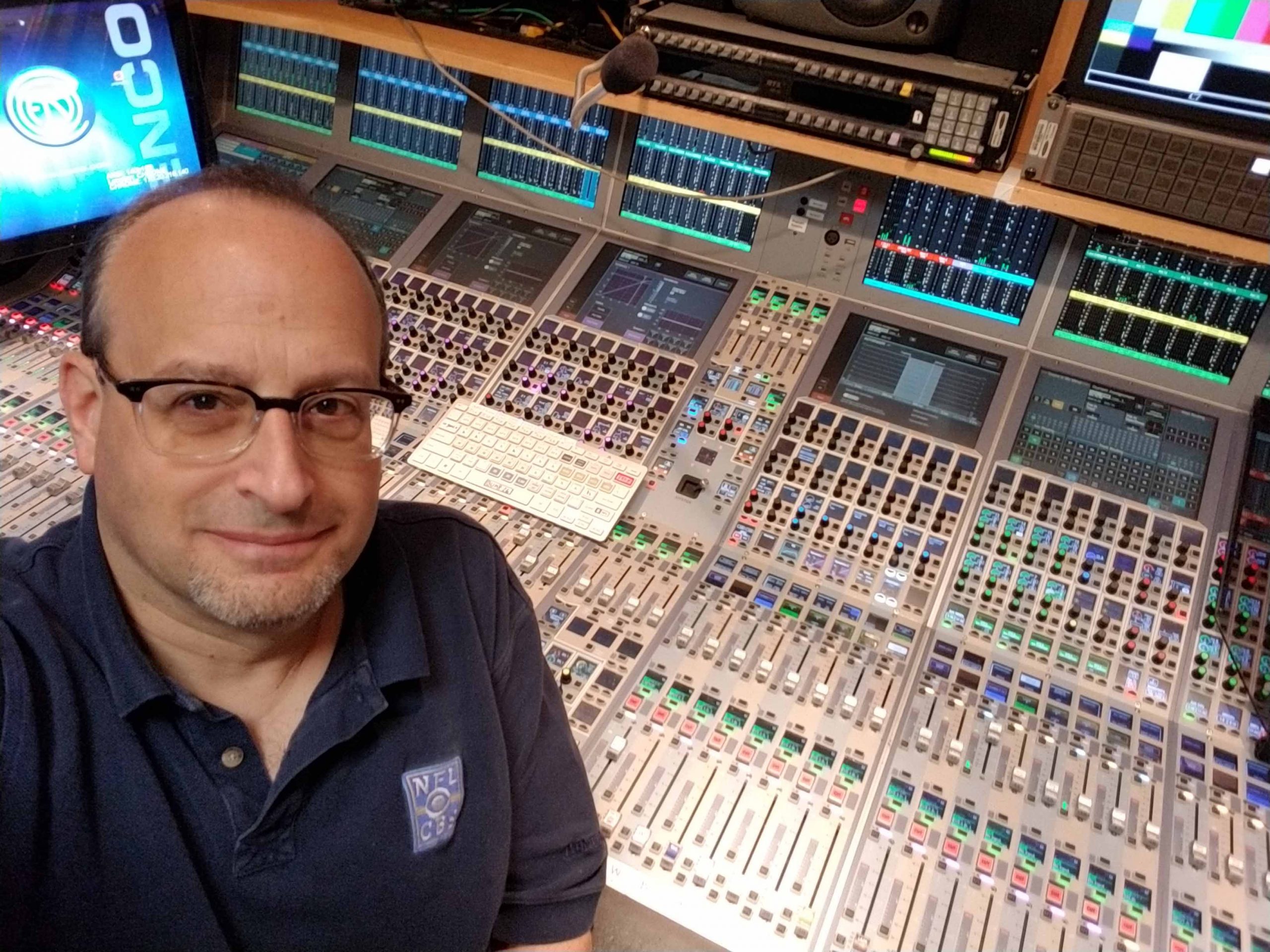 Can you talk us through how you got into professional audio and to where you are now?
I was bitten by the bug for mixing music at my college radio station and got a job as the house engineer at a Boston recording studio straight out of college. Although I was working quite a bit, I still had to get a “day job” to cover my expenses, and that was at a pro audio dealership. I shared an office with the broadcast salesman. A local station was upgrading its mobile unit and its engineering staff was in and out of the office; we became friendly. One day the Chief Engineer told me his A1 was leaving and they were having a tough time finding a replacement. He asked if I would be interested and I explained I knew nothing about TV.” They replied with, “That’s ok, we can teach you the TV part.” So I took the job. After two weeks of training the previous A1 said, “I’ve got to leave for my new job; you’ll be fine, see ya,” and I was on my own. That was 32 years ago.

We know you’ve been mixing audio for sports broadcasting on a professional level for more than 20 years and that music was your first passion. In more detail, what does your current role entail?
I’m responsible for what the audience hears on the air. I also set up and manage all aspects of the audio setup on location and manage the audio crew. When shows get larger the network will bring in specialists to handle the comms, but usually I have to deal with that, too.

Can you describe a typical broadcast audio workflow that you use?
My workflow has developed, starting back in the days when resources were limited.

We might have had 32 faders, eight groups, four auxes, a few matrixes and a program buss

I typically mix into groups/stems: announcers, field EFX, EVS, music, sound effects, crowd, etc. The groups feed auxes (for pre/post feeds), and the mains (for program and transmission feeds). Multitrack sends are used for router ISO feeds. This basic workflow has served me well through many generations of desk, both analog and digital. Calrec was the first desk I used that provided a pre-fade feed from a multitrack send — and it was an absolute gamechanger for me. Calrec desks are very flexible and quick. If I need to reroute or make changes, it’s usually only a button push away.

What’s different – unique, even – about audio in sports broadcasting?
At the core, sports is mixing the spoken word (announcers) against noise (the event you’re covering) and the noise is usually in the same frequency bands as your spoken word, so the challenge is keeping things separated and clear. I try to approach the mix as I did the music I mixed, where the announcers are the singers and the natural sound is the band. I have to carve out frequencies to make room for others and dynamically control elements so they don’t get in the way of others in the mix, and I have to do this in real time; there’s no rewind or take two. Oh, did I mention that I’m taking cues from the director and producer all the while?

When did you first start working with Calrec products?
I first saw a Calrec console at the 1994 Winter Olympics in Lillehammer. Shortly after that they started appearing in US mobiles.

What Calrec consoles have you used over the years and for what projects?
I’ve used the Q2, S2, then the Alpha, Sigma, Omega, Artemis and Apollo. I was told that I was working the second Alpha ever in a US mobile unit (CBS NFL) when it appeared in NEP SS9 (2002?) All of my projects have been on Calrec desks, with a smattering of other brands before Calrec became somewhat of a standard in US mobile trucks.

What’s a recent example of a project where you used Calrec technology?
NFL on CBS during the 2019 season. It was a brand new GameCreek “Columbia” truck and all IP based.

What are the technological advantages of the Calrec console(s) that you’re using?
I’m a mixer first and an engineer second. The console sounds good and I appreciate the fact that I don’t have to dig around too many menus to get things done. I don’t really care too much about what happens under the hood. If the sausage tastes great, there’s no need for me to know in detail how it’s made.

What have been the key technological milestones you’ve witnessed in your time in broadcast audio and how have they changed what you do/how you work?
I’ve more or less run the gamut with format changes. From mono to stereo; stereo to ProLogic Surround; then ProLogic Surround to 5.1. From there it was SD to HD then HD to 3D, then 3D to 4K. And let’s not forget that I went from analog to digital desks and this transition was the most challenging of all.

Can you talk us through the project you’ve most enjoyed working on and/or that really stands out in your career?
I’ve done AFC Championships, the Olympics, NCAA Tournaments and other large events but by far the most nerve-wracking was my first SuperBowl. It was SuperBowl XXXV in 2001. The most fun I had was an album I worked on before I got into sports that turned into working on a major motion picture set. Long story.

What are your thoughts about AoIP and where we’re at and what it means for the future?
I think we are at the beginning of an exciting time of new technology implementation. AoIP has lots of promise but there are kinks to be worked out specific to the OB world. Audio folks have to be mixers and network managers, and those are two completely different skillsets.

How have second screens (smartphones, laptops) changed how mixes are produced? What about viewer expectation for the perfect viewing experience; how as that impacted how you do your job?
I haven’t changed the way I produce a broadcast because of the internet. The quality of what I stream at home is as good, if not better, than what the local stations are transmitting. I make sure the mix sounds good at low volume and in stereo or mono, which is an old music mix technique.

If it sounds good like that, it’ll sound good anywhere. I try to get an off-air record of shows I mix to see if everything is where it should be. I work in live sports; we are there to document the event, not create it, so for me there is no “perfect viewing experience”. We just try to do the best we can to bring the event home as exciting as we can within the limitations we have.

How do you see audio evolving in the next five years?
I see more AoIP solutions evolving, and I think there will be a push to do more “at-home productions” to cut costs.