As fans scratch and claw for any kind of live sports content, the famous jingle that signals the start of Thursday night’s NFL Draft will be a welcome sound to many ears around the nation. As the league and broadcasters commit wholeheartedly to this first-ever virtual event, production staff from all 30 teams will use the power of social media to conjure up content well before and well after the words “The Pick Is In” are seen on the television screen.

Instead of gathering in the familiar setting of a control room, members will come together in another location that has become quite familiar over the past month: a video conference. In the case of the reigning Super Bowl Champions, staffers from the Kansas City Chiefs will be using a hefty combination of different platforms to stay in sync with each other as well as to share materials used in their Draft plans. 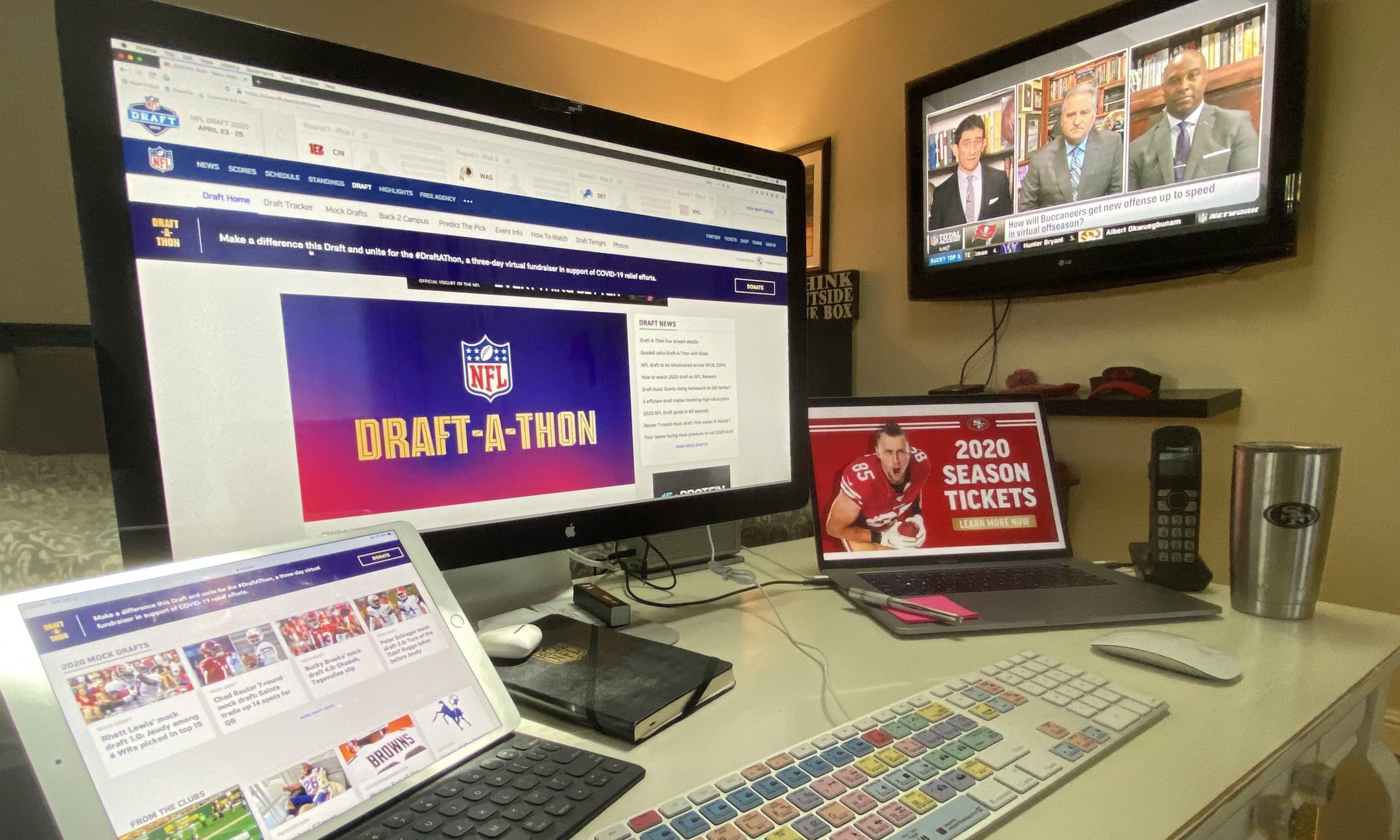 “We’ll be staying connected to our team through a mixture of video-conference platforms,” says Glenn Connelly, director, content and production, Kansas City Chiefs. “Some individuals on our content team will be on a Cisco WebEx call in order to get information to everyone as quickly as possible. We’ll also use Slack to communicate [internally] and send content throughout our social and production teams. Lastly, we’ll upload deliverables to Dropbox and Frame.io content that everyone will have access to quickly edit and post.”

Although most teams use these lines of communications, some teams have tapped into the regular production setup in their respective stadiums. For the Monsters of the Midway, the crew will leverage assets that are harbored at the team’s command center in Lake Forest, IL.

“We have ways to access video content stored on our editing storage systems at headquarters in Halas Hall,” says Greg Miller, VP, content and innovation, Chicago Bears. “Our content, social media, and digital-media producers are technically set up so they can produce and post any kind of content from their at-home computers.”

Similarly, Philadelphia Eagles VP, Content and Production, Eric Long and his entertainment team are mixing video conferencing with a few technologies from their home at Lincoln Financial Field. With the help of AV Engineer David Sullivan, files and other necessary content will be able to be sent to and fro with minimal hiccups.

“We’ll be using remote-access software to crew some traditional studio positions virtually and a combination of solutions to move feeds from place to place,” says Long. “The infrastructure is coming together, and we feel good about what we’ll be delivering as a final product. Aside from the fact that everyone is working from their individual homes, the coverage should feel very similar to what our fanbase has been accustomed to over the past few years.”

If You Build It, The Team Will Come: 49ers, Ravens Construct Unique At-Home Locations

Working in a digital capacity and relying on virtual backdrops will be common practice for Thursday night’s festivities, but there are a few exceptions. The Baltimore Ravens, for example, are allowing staffers to deploy home equipment as well as a bit of ingenuity in their makeshift production studios.

“Before the quarantine went into effect, we set up VPN [virtual-private-network] connections to our SAN [storage area network] at our team facility,” says Jay O’Brien, VP, broadcasting and gameday productions, Baltimore Ravens. “Our director of photography built a set in the basement of our primary on-air talent, and our production team quickly jumped into new roles to set up new remote-production and streaming platforms. While we’re not able to produce or film this season’s Draft content in the way we normally would, we’re ready for the Draft and are excited with our content plan.” 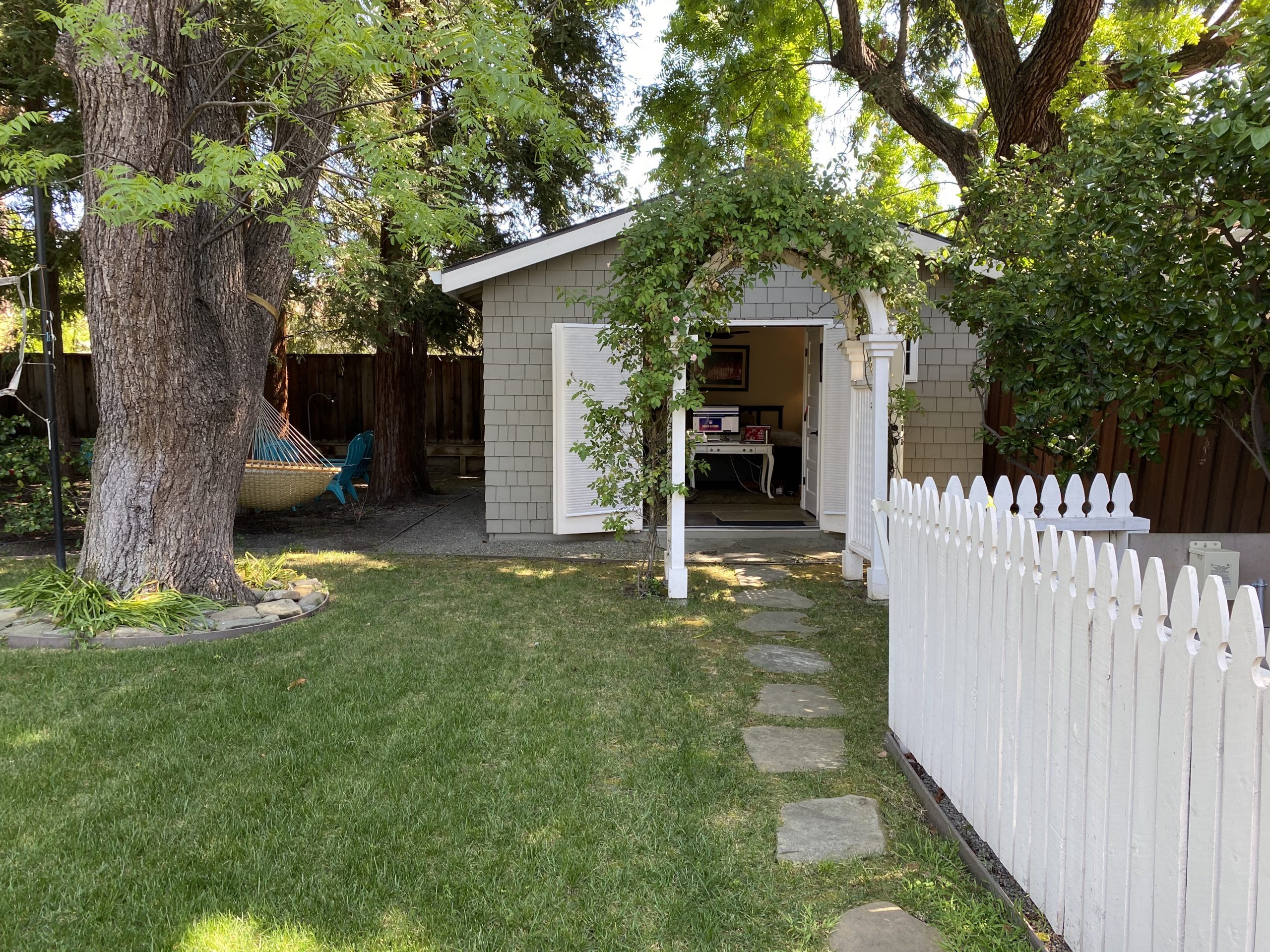 San Francisco 49ers’ Robert Alberino will preside from a cottage in his backyard during the NFL Draft.

The Ravens were able to raise the bar, but the second-best team in the NFL took this process a whole step forward. 49ers Studios, the in-house media-production team of the San Francisco 49ers, and VP/Executive Producer Robert Alberino have made a name for themselves based on remaining agile and flexible with their ideas. For the first official event of the 2020 season, Alberino’s Draft operations will be housed in a structure built six years ago in his own backyard in San Jose, CA.

“Luckily, in 2014, my wife and I built a small cottage in our backyard for my mother- and father-in-law to come visit. It has been renamed the Alberino/49ers Draft Central Control Room and Ops,” he says, adding, “Each team member is hunkering down at home and is hard-wiring [their technology] to avoid any WI-FI challenges. Information has to be passed quickly, efficiently, and without mistakes, so over-communication and doing our best to avoid latency will be the key to success.”

From Open to Close: Fans Enjoy Pre- and Post-Draft Live Streams
Since the annual tradition has never been showcased in this way, there’s no correct blueprint to reference from a team perspective. In that case, teams are tackling the endeavor with reckless abandon and different flavors of material for fans stuck at home.

To set the table in the City of Brotherly Love, all three days of the Draft will start with the 30-minute Dietz & Watson Draft Central, hosted by Amy Campbell, Fran Duffy, and Ross Tucker. When picks are made, the Eagles faithful can virtually congregate on the team’s social-media platforms to participate in a bracket challenge and poll questions as well as give feedback and reactions to each new player on the team’s mobile app. In the Windy City, the Bears will provide a behind-the-scenes look at the in-home setups of high-profile executives, including GM Ryan Pace.

When the Draft starts, the Carolina Panthers will be with fans every step of the way to digest the proceedings.

“We plan to go all out for the NFL Draft,” says Kristen Balboni, reporter, Carolina Panthers. “We’re doing a live Draft Show that will cover the whole first round on Thursday night, hosted by myself and joined by Panthers legends Jake Delhomme, Jordan Gross, Jonathan Stewart, and a bunch of special guests popping in throughout the night.”

Other teams will follow suit with their own shows, including the Minnesota Vikings Draft Show during Round 1 and the New York Giants’ Big Blue Draft Night Live presented by Van Heusen with Bob Papa, Carl Banks, Shaun O’Hara, and David Diehl on the team’s YouTube channel, website, and app.

Content Overload: Projects From Draft Parties to Acts of Philanthropy
Although live interaction will not take place this year, fans can still take part in numerous opportunities to show their support, and, since collegiate-turned-professional athletes will celebrate with their families after their names are called, multiple franchises are turning their speakers up to 11 with virtual Draft parties.

In true Miami fashion, the Dolphins will be hosting an NFL Draft party on their official fans group on Facebook and will offer exclusive content, live Q&As with players, and more. Further north, the Washington Redskins’ three-hour-long Draft party will be hosted by rapper and area-native Wale and feature guests like current quarterback Dwayne Haskins and former running back Brian Mitchell.

Back in the Bay Area, the 49ers’ live Draft party via Grabyo will be integrated with an upgraded website that will be the go-to spot for all Draft needs.

“Our faithful look forward to great NFL milestones and moments during the season, and the NFL Draft is certainly one of those times,” says Alberino. “Our design team has created a robust look and feel that will keep the fans connected to every move the club makes. We’ve been putting together a three-phase broadcast for Day 1 that will include player and guest interviews, live DJs, and other great information.”

Other teams will also have parties either before or during the Draft, including the Vikings’ Draft Virtual Happy Hour during Round 2; the Dallas Cowboys’ Cowboys Draft Live with Jamie Foxx and DeMarcus Ware; the Jacksonville Jaguars with Doug Marrone, DJ Chark, Maurice Jones-Drew, and Fred Taylor; and the Cincinnati Bengals with Anthony Muñoz and Boomer Esiason.

Along with parties, franchises are placing selected fans in the center of their digital streams. For example, the Bears’ “Virtual Inner Circle” will gather 15 fans — longtime season-ticket holders, first responders, and military personnel — and place them in the spotlight on Days 1 and 2. In Baltimore, O’Brien and his staff are coordinating a similar strategy with famous alumni and current personalities. 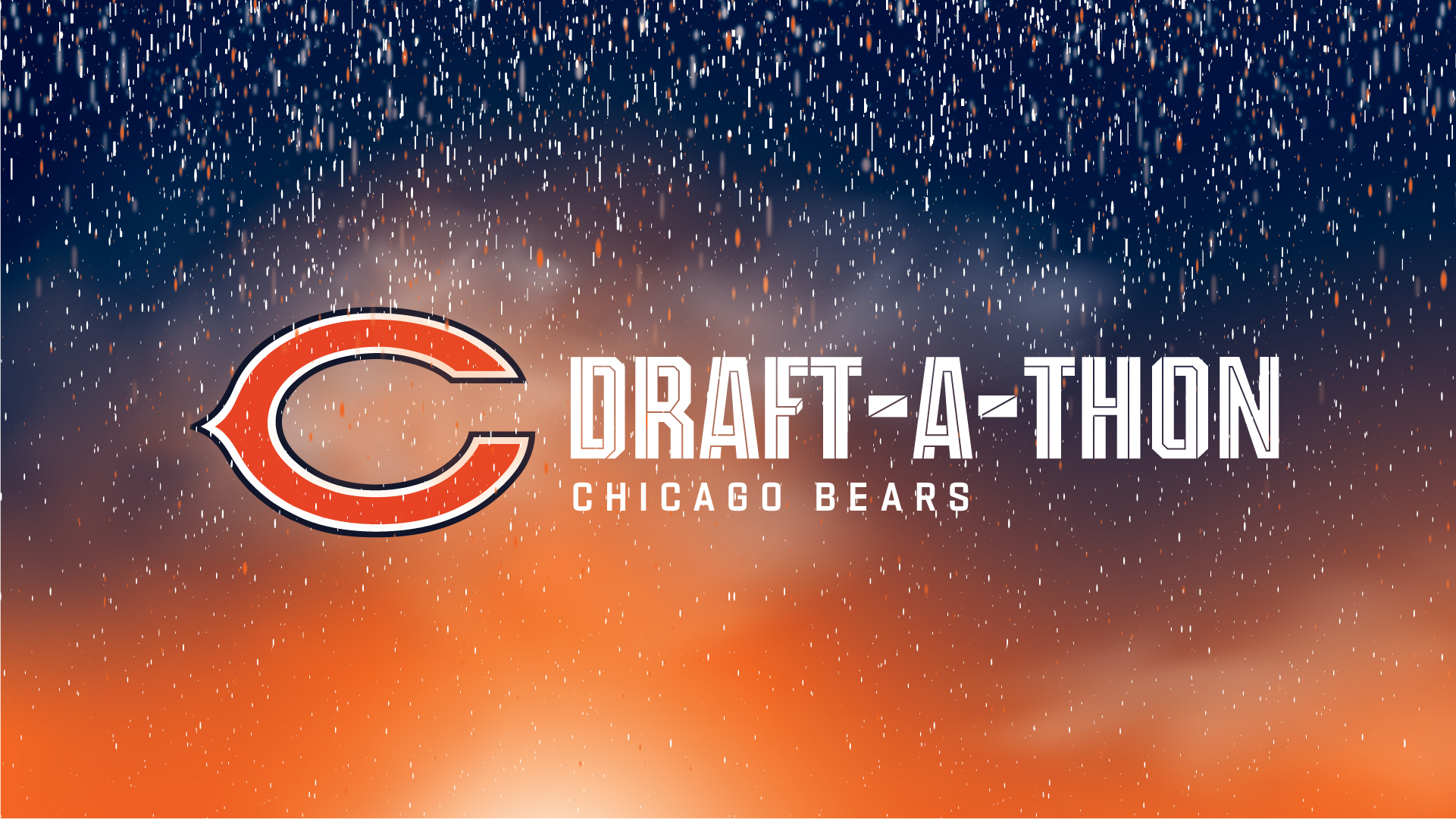 The Chicago Bears will be raising funds for local charities as part of the NFL’s Draft-A-Thon.

“We want to provide unique engagement opportunities with our fans to replace the loss of our in-person Draft weekend events that have become staples,” says O’Brien. “Between Thursday and Friday nights, over 15 former Ravens are going to ‘Crash the Draft’ and virtually drop in on Ravens fans’ Draft parties to hang out. Also, Coach [John] Harbaugh will be doing a Facebook Live chat with our fans on Friday before the Draft’s second round, and our first-round pick will be hanging out with fans on our Instagram Live on Friday night.”

On an altruistic note, many organizations will be taking part in the league’s “Draft-A-Thon” initiative to pay tribute to medical workers who are on the frontlines of the coronavirus pandemic as well as to raise funds for six national nonprofits. At a team level, the Bears will urge fans to donate to the local Salvation Army, Meals on Wheels, and Bears Cares, the franchise’s charity. In addition to giving away prizes, the Buffalo Bills will also prompt fans to make a donation.

When things die down, live-stream recaps will get under way. In the Midwest, Connelly and company will handle recaps that will include former and current Chiefs players, celebrity fans, coaches, and the general manager after every round on Friday, Saturday, and Sunday.

Along with the franchises’ unique ideas, there will be traditional staples of the NFL Draft, including live interviews with each draftee after his selection.