With crew and talent in their respective homes, B/R will produce 12 hours of live coverage in three days

Few events on the sports calendar are bigger than the NFL Draft for the video-production and -technology teams at Bleacher Report. Last year, the digital–sports-media powerhouse enjoyed its biggest weekend in the history of the brand, with its B/R app pulling in more than 250 million content engagements over the three-day stretch of the Draft.

In 2020, however, precedents matter little, and the NFL Draft soldiers amid a global pandemic that has shut down the sports world, including many of the facilities that sports-content creators work in. At Bleacher Report, which has closed its Manhattan offices, the video team was faced with the challenge of putting on four days’ worth of live coverage with everyone — both in front of and behind the camera — working from home.

Adding to the challenge, this year marks the first time that Bleacher Report’s live NFL Draft coverage will be streamed directly into the B/R app. 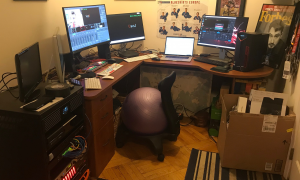 To produce live shows, Bleacher Report has built a remote control room in Steve Pellegrino’s Queens apartment. Through LiveU servers, he is able to take in feeds from talent in their respective homes and even tap into key tools based in B/R’s Manhattan studios.

“We needed to adapt our production workflows,” says Steve Pellegrino, director, video technical operations, Bleacher Report. “It was important to our team that we could still execute on a live-show experience for our audience while also providing the same VOD clip-outs from those live shows.”

After Bleacher Report cleared out its facility in March, Pellegrino and his team took about a week to work through their options. How could they pull off a widely distributed live production from their homes? What technology would they need? Could they leverage any of the infrastructure built into their new, now empty studios?

Before building a full-fledged video control in Pellegrino’s Queens, NY, apartment, the tech team installed LiveU server and encoder equipment in many of the crew members’ and talents’ homes. They used LiveU LU-Lite, a laptop version of LiveU’s encoder, which makes it easy for everyone to hook into the main network. It also takes up very little space, which was critical for team members residing in smaller NYC apartments and homes.

“It is great for talent who live in small apartments,” cracks Pellegrino. “I am grateful to our talent for being patient with us as they have had to become much more technical in this work-from-home environment.”

With the transmission layer settled, the crew moved on to live streaming, switching, and audio/IFB/comms. At the “mothership” in Pellegrino’s apartment, the team installed a newly purchased Livestream Studio 6, a 4K switcher/encoder that can run on a PC or Mac computer. 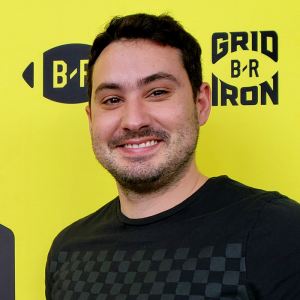 Bleacher Report’s Steve Pellegrino: “It was important that we could execute on a live-show experience while providing the same VOD clip-outs from those live shows.”

With a LiveU quad server, Pellegrino can take in all the RTMP feeds from the various LiveU gear distributed amongst the talent. In addition, it allows him to tap into the Ross Xpression graphics machines housed in the Manhattan studios. The graphics operator, who resides in New Haven, CT, is able to access Xpression directly and have all the live capabilities available from the main control room.

There’s a similar pathway for playback. B/R is routing a channel from its main studio’s Ross Mira to the LiveU encoder. The playback operator, who will be helping play out more than 200 player highlight packages as picks are made throughout the Draft, will be working from Pottsville, PA, also with the same controls he would have in the NYC control room.

Audio, meanwhile, is being handled from the Rutherford, NJ, home of Audio Engineer Mark Steinmetz. Through a LiveU server, he is able to pull down the same talent feeds as Pellegrino, while de-embedding the audio off those video-server feeds and pushing it into a Yamaha QL1 mixer. That creates a mix for talent while also feeding the audio to Pellegrino’s Queens control room. The audio is being delivered over Verizon 1-GBps public home networks via two Z/IP ONE IP broadcast codecs from The Telos Alliance.

“It’s great because it allows me to focus on cutting the live show from my video-control room and Mark to be able to handle all the audio workflow on his end,” says Pellegrino. “If you watch a lot of TV shows right now with remote contributors via Skype, WebEx, etc., the audio quality is not very good. Our workflow has proved to produce a much better-quality audio source.”

Steinmetz is also managing comms and IFB from his audio-control room, using a Unity Intercom app to talk to crew on partylines. He also has four VoIP lines installed in his home that talent can call into for independent IFB channels. The VoIP integrates with the Unity system so that producers can talk directly to talent. 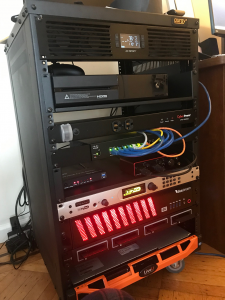 The LiveU infrastructure allows graphics, playback, and audio operators working from home to leverage the same tools they would if they were in the NYC control room.

“Ultimately, through this workflow, we have created a distributed–control-room model for remote production, which is working,” says Pellegrino. “We are very excited to conduct our [NFL] Draft production with this process and are already thinking about building out this process as B/R continues to work in a [work-from-home] environment.”

When it comes to actual streaming delivery, Pellegrino can deliver an RTMP stream and a LiveU encode stream from his apartment control room to Turner’s Ingest/TOC teams in Atlanta. From there, the final product is pushed to the B/R app while delivering an onslaught of content to B/R’s social channels.

Editors are also feeding the social beast: the program feed is being fed through WSC Sports highlight-clipping software. It’s the same clipping solution they would typically use, but it offers the flexibility of logging in from anywhere to clip out the live stream in a browser-based environment. Within that system, editors can also caption, font, and directly upload clips to the B/R for VOD consumption.

Prior to the coronavirus outbreak, B/R had big plans for this year’s NFL Draft coverage. Following the launch of the B/R Gridiron brand in the fall and a successful onsite activation amplifying that brand in South Beach, FL, for Super Bowl LIV, the company was putting the finishing touches on a 1,500-sq.-ft. studio space in its new Manhattan office dedicated entirely to the football vertical. First rehearsals were to be held in the space last week in time for the Draft this week, with more than 20 behind-the-scenes staffers set to operate the control room, studio, ingest, and edit stations.