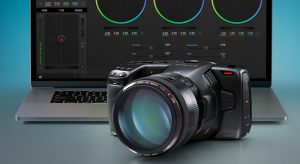 Blackmagic Pocket Cinema Camera now works as a studio camera for live production when used with ATEM Mini. Video and control is via the HDMI connection, which is available as soon as customers plug the cameras in. The record light becomes a tally light so customers can see which camera is on air. The ATEM Software Control camera page has a camera control unit (CCU) style interface for adjusting and matching their cameras. Move the CCU control vertically for iris and left to right to adjust black level. It’s the same as a broadcast CCU. There are also controls for color tint to balance camera as well as focus, gain, and shutter speed. Customers can even ISO record Blackmagic RAW in the camera for editing later.

The elegant design of the Blackmagic Pocket Cinema Camera packs an incredible number of high-end digital film features into a miniaturized, handheld design. Made from lightweight carbon fiber polycarbonate composite, the camera features a multifunction handgrip with all controls for recording, ISO, WB, and shutter angle right at their fingertips.

Blackmagic Pocket Cinema Cameras have an incredible 13 stops of dynamic range which means they preserve more detail in the lightest and darkest areas of an image than simple video cameras can. This allows customers to set exposure for an indoor scene and still retain the details of bright outdoor light coming through a window.

The Blackmagic Pocket Cinema Camera features built-in CFast and SD UHS-II card recorders, and a USB-C expansion port for recording direct to an external media disk. Customers can use regular SD cards for HD or higher performance UHS-II and CFast cards for native 4K or 6K when using Blackmagic RAW. Imagine capturing over an hour of full-resolution 6K images on a single 256GB SD UHS-II card. The ProRes and Blackmagic RAW files work with all video software.

Blackmagic RAW is a revolutionary new format designed to capture and preserve the quality of the sensor data from their camera. Video formats such as H.264 are highly compressed, plus add noise and artifacts, causing original sensor detail to be lost forever. Blackmagic RAW eliminates this problem and gives customers stunning images with incredible detail and color throughout the production pipeline from camera to edit, color and mastering. It also saves camera settings as metadata so customers can set ISO, white balance and exposure in camera or override them later while editing, all without any loss of quality. Blackmagic RAW files are also small and fast to use making them easy to work with.

Both Blackmagic Pocket Cinema Camera models feature a mini XLR input with 48 volts of phantom power for connecting professional microphones such as lapel mics and booms. The four built in microphones have an extremely low noise floor and are shock and wind resistant, allowing customers to capture great sound in any location. There’s also a 3.5mm audio input for connecting video camera style microphones, along with a built in speaker for playback and a 3.5mm headphone jack.

“We have worked very hard to build this camera at lower cost, and we think even more people will be able to take advantage of this price reduction to move into a more advanced and much higher quality digital film workflow,” said Grant Petty, Blackmagic Design CEO. “This has become more important with COVID-19. Many broadcasters have been setting up home studios for presenters, which have used ATEM Mini switchers and Blackmagic Pocket Cinema Cameras. We think with the recent software updates for switcher control of the Pocket Cinema Cameras from the ATEM Mini switchers, combined with this more affordable price it will greatly help this workflow.” 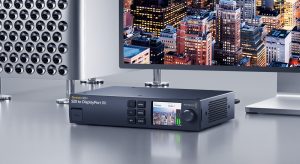 With dual on-screen scope overlays, HDR, scaled and pixel-by-pixel modes, and 33 point 3D LUTs, Teranex Mini SDI to DisplayPort has been specifically designed for use in professional film and television markets.

Customers also get an elegant design with color LCD for monitoring and control of settings. The front panel includes controls and a color display for monitoring the video input, audio meters, and video standard indication. With Pro Display XDR, this panel can be used to control display settings such as switching reference modes and adjusting brightness.

The rear panel has Quad Link 12G-SDI for HD, Ultra HD as well as up to 8K formats. There is a USB‑C style connection for monitors such as the Pro Display XDR, and 2 full size DisplayPort connections for regular computer monitors. The built-in scaler will ensure the video input standard is scaled to the native resolution of the connected DisplayPort monitor. Or, use the built-in pixel-by-pixel mode to view unscaled HD or 4K content. Customers can even connect both 2SI and Square Division inputs.

Teranex Mini SDI to DisplayPort 8K HDR has everything for the latest HDR workflows. All that’s required is to connect a Pro Display XDR or an HDR compatible DisplayPort monitor to allow HDR SDI monitoring. Static metadata PQ formats in the VPID are handled according to the ST2108-1, ST2084 and the ST425 standards. ST425 defines 2 new bits in the VPID to indicate transfer characteristic of SDR or PQ, and ST2108-1 defines how to transport HDR static or dynamic metadata over SDI. There is also support for ST2082-10 for 12G SDI, as well as ST425 for 3G-SDI sources. Both Rec.2020 and Rec.709 color space are supported, and 100% of the DCI-P3 format.

Two fully independent on-screen scopes are included so compliance with broadcast standards is easy when doing critical high-end work. Scopes are overlaid on screen so they can customize position, size and opacity. Customers can select from a range of scopes, including waveform for displaying luminance levels of their input signal. The vectorscope display allows customers to see the intensity of color at 100% SDI reference levels. Customers also get RGB and YUV parade displays, which are ideal for color correction and checking for illegal levels. Histogram shows the distribution of white to black detail in their images and highlights or shadows clipping.

Teranex Mini SDI to DisplayPort 8K HDR includes the same high quality 33 point 3D LUTs as used in the film industry. Two independent 3D LUTs can be loaded and customers can select between them from the front panel.

The front panel LCD provides confidence monitoring with both images and accurate audio level meters. There are menus for all functions and it’s easy to scroll through menu “pages” to find settings that need changing. The 3D LUTs can be enabled just by pressing the buttons labelled 1 or 2. The audio meters can even be switched between VU or PPM ballistics. There are settings for configuring scopes and their on-screen location or opacity. Customers can even view and edit network settings.

For rack mounting, customers can simply add a Teranex Mini Rack Shelf. This consists of a metal tray that holds the converter and allows it to be screwed down before the whole shelf is bolted into the rack. Of course, Teranex Mini SDI to DisplayPort 8K HDR includes rubber feet that customers can attach to the underside of the converter if they want to place it on a desktop.

“We are excited to announce the immediate availability of the Teranex Mini SDI to DisplayPort 8K HDR for customers working with the new Pro Display XDR,” said Petty. “It provides advanced HDR and color-critical monitoring features such as built in scopes, 33 point 3D LUT support, and native 8K for the latest customer workflows!”