It is almost the midpoint of the 2020 Overwatch League season, and the league has completed May’s schedule with all 20 teams in action, and the introduction of new single-elimination regional tournaments.

Both tournaments have a combined US $225,000 prize pool with the following tiers:

The teams competing in each region for the May qualifying matches and tournaments: 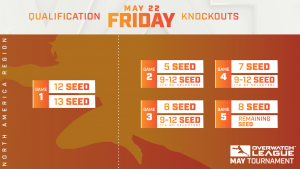 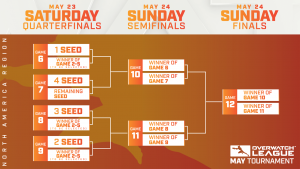 And here’s the Asia tournament bracket: 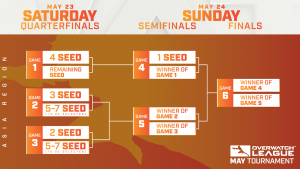 Specific rules for the Asia tournament:

The May qualifier matches count in the overall season standings, but individual tournament matches do not count. However, the top-four finishers in each region’s tournament will earn a fixed number of bonus wins that do count in the standings toward playoffs qualification.

Matches leading up to the tournaments will feature a wider variety of matchups in North America, with all 13 teams now able to play each other on shared servers. Weekly Hero Pools will remain in effect, as will a predetermined map pool which is set to switch to new maps as we head into Week 14.