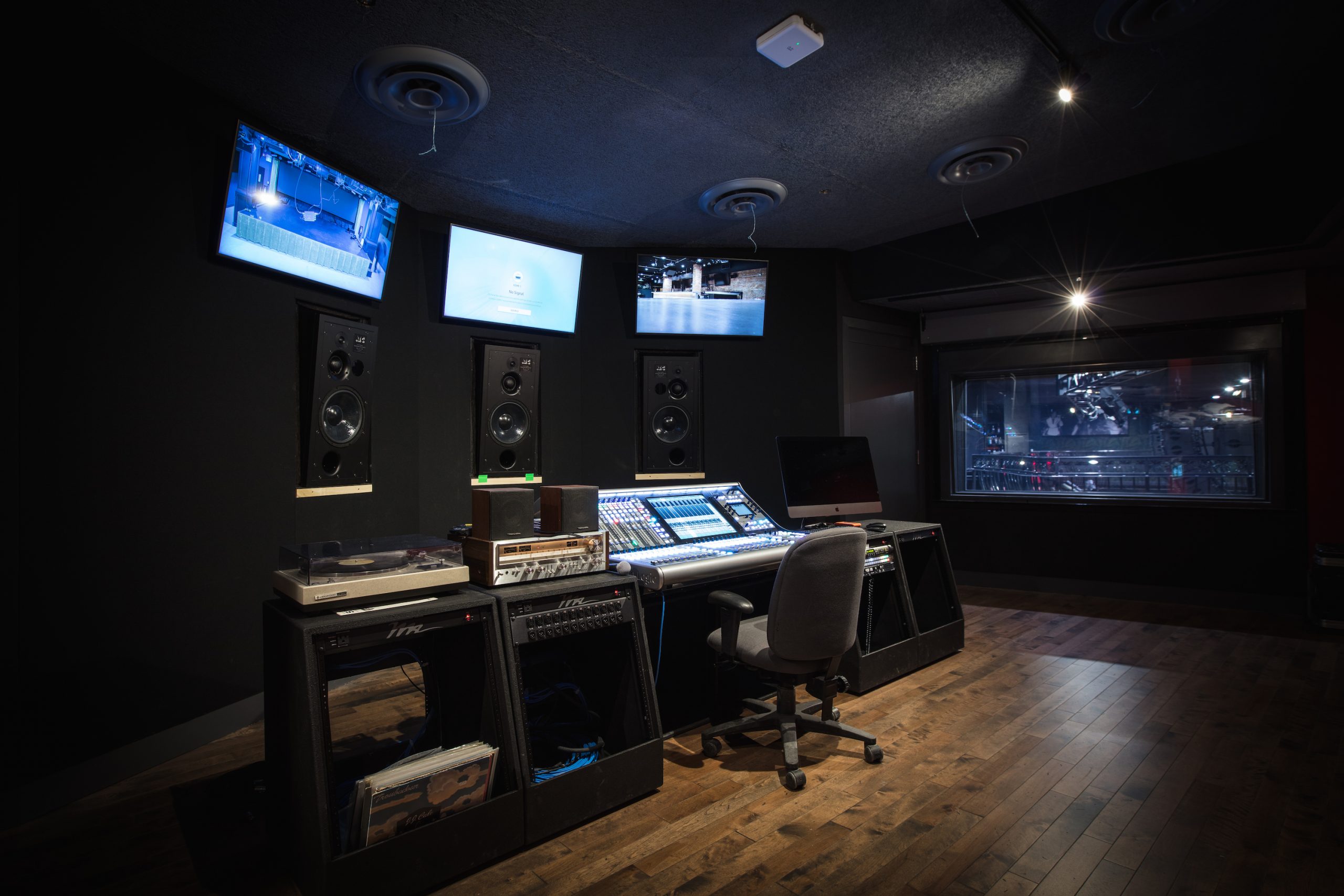 “It’s not quite a club anymore. It’s an event space with a very beautifully designed interior inside a broadcast facility,” says Jamie Howieson, executive designer and production manager at the iconic venue, which has long been affectionately referred to as the El Mo.

“The main reason I went with the L550 desk is that, when I was using it in the past, I never heard a better combination of preamp, clock and converter in a live console—ever,” says Howieson. “I got a lot of time with it when I was touring with Mumford and Sons. And with my age-old history of using SSLs in some of the control rooms I’ve worked in the past, I knew it was the right desk for this design. With the remote preamps it was no-brainer.”

The revamped building has been restructured as a content creation center where performances on both floors as well as the backstage area can be mixed through the SSL L550 simultaneously for recording and streaming. “We have three performance areas—FL1, FL2 and our green room/dressing room—that are all connected to our control room. Inside the control room, there’s a video control room, an audio control room and an isolation booth,” says Howieson. FL1, on the lower level, accommodates an audience of up to 350 while FL2, on the upper floor, has a 450 capacity and features a large balcony.

Howieson continues, “We have 98 tracks to Avid Pro Tools HD at 24-bit, 192  kHz. I have 32 channels of mic preamps downstairs and 64 channels on floor two. I’ve got all the remote preamps running MADI, point to point, with no patching in between. We also have the ability to capture five 4K video images.” The L550’s onboard digital effects and processing is complemented by a rack of outboard analog mic preamps and tube devices. Over two and a half miles of cabling were installed to support the facility’s audio, video, lighting and internet infrastructure.

Where live music broadcast production facilities more typically feature a large- format multitrack recording console, Howieson figured that touring engineers would be more comfortable with a familiar live desk. “The L550 is a great broadcast console. I can have the guys on the road sit down in front of the L550 and mix, instead of sitting at an SSL 9000 with a house engineer, telling them to turn the kick down or the snare up.

The power and flexibility of the L550 not only allows Howieson to handle three or four bands on a single show, it has already also enabled him to mix and record two bands simultaneously in the individual live spaces. “I tracked them and mixed them down to a two-mix on each floor,” he says. “Acts can come in, and at the end of the performance, we hand them a tracked 5.1/4K line mix on a hard drive.”

Other than the control room monitor speakers, he says, every transducer in the building is L-Acoustics. “On floor one we have a set of ARCS II with ARCS II delays. I have 42 surround sound speakers on FL1 and FL2. On FL2 we have an L- Acoustics Kara and KIVA for the main system and X15 HQ for stage monitors with Shure and Sennheiser IEMs.”

There’s one other reason why Howieson chose to install a Solid State Logic desk, he says. “The service I got from SSL has been fantastic. And it always has been. Those guys have been great to us.”

“The partnership between Solotech and Solid State Logic started long time ago. Today, we trust the Live Console Series when it is time to deliver events around the world,” says Frankie Desjardins, VP R&D Solotech Inc. “We trusted Solid State Logic products, on our different projects, for the past 20 years. I think that says it all.”

First opened as a music venue in 1948, the El Mocambo hosted a who’s who of blues and jazz artists in its early days, including Marilyn Monroe, Buddy Rich, Buddy Guy and Muddy Waters. But it was two surprise shows in 1977 by The Rolling Stones, billed as The Cockroaches, that put the venue on the rock ‘n’ roll map. The band’s first live performances in 14 years, recordings from the shows were released on one side of the Love You Live double LP. In the years that followed, the El Mo hosted U2, Pat Benatar, Stevie Ray Vaughan, Cheap Trick, Blondie, The Ramones, Sum 41 and numerous others, many of whom are immortalized on the newly reopened venue’s photo-covered acoustic panels.