Parab Mics Move From the Field to the Press Conference

In an era defined by touchless interaction, one stalwart element of broadcast-sports audio may have a new and important role in keeping sports — or at least people talking about sports — safely on the air.

Klover Products, whose “true” parabolic-microphone acoustical collectors were first deployed eight years ago for Fox Sports coverage of NFL and MLB games and have become standard components of many major-league broadcasts, is promoting those same polycarbonate dishes as a means to capture the sound of onsite interviews without needing a reporter or crewmember to work closely on an interviewee, attaching a lavalier microphone to a shirt or lapel.

“Placing a lapel microphone on the interviewee is not practical [in light of social-distancing requirements],” says Klover Products President Paul Terpstra, “and the shotgun mic on top of the camera won’t capture clear audio from a safe distance, especially if there is significant ambient noise.” He adds that fishpole boom microphones are often unwieldy and can intrude into the picture. 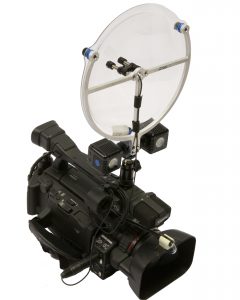 Klover MiK 09 9-in.-diameter parab mic can capture normal-level speech from as far away as 6-10 ft.

Parabolic microphones may provide a great alternative, he says, explaining that they “provide a mechanical amplification for the sound coming from in front of the dish. This allows a person speaking at a normal level to be recorded from 6 ft.-10 ft. [away] using a parabolic microphone only 9 in. in diameter. The microphone and reporter can maintain a safe distance during the interview, reducing the chance of infection.”

Amplification of the sounds at the front of the dish, with most peripheral sound blocked by the dish itself, provides considerable directionality for the parabolic mic. This means that the level of ambient noise is greatly reduced and the person of interest can be clearly heard.

Terpstra notes that any omnidirectional lapel microphone can be used in the 9-in. parabolic, allowing it to work with any camera with a microphone input. It can be mounted to the cold shoe of a camera or to a small pistol-grip handle and handheld. If required, a smaller parabolic-microphone assembly can be mounted to a light stand, placed on the end of a boom pole, or suspended from the ceiling grid in a studio. If greater range is required, a Klover MiK 16 16-in.-diameter parabolic microphone can be used. For instance, says Terpstra, the Philadelphia Eagles use a 16-in.-diameter parabolic microphone to capture questions during press conferences they stream live, allowing online audiences to hear both the questions and the answers.

“Interviews are a critical portion of sports coverage,” he says, “and it may be quite a while until people feel safe wearing a wireless mic or even holding a mic. Allowing those interviews to be conducted in a safe manner will make sports television much better.”