The goal is to bring the IP-based, 4K-capable control room online by midsummer

After pausing technical integration and commissioning on March 13 because of the coronavirus pandemic, UFC has restarted work on its IP-based, 4K-capable broadcast-operations center (BOC) at UFC Apex in Las Vegas. The mixed-martial-arts company and systems integrator BeckTV are following Federal Coronavirus Guidelines, and equipment is being commissioned remotely whenever possible. 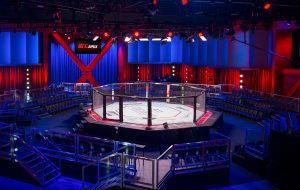 The UFC Apex arena space can be configured to accommodate a variety of live events and is expected to host UFC events in the near future.

“It’s an unbelievable feeling to be at this point,” says Tim O’Toole, SVP, event production, UFC. “I’ve been with UFC for 14 years, and, when I started, we had a very small team. To see it grow to where it is today and to have our own broadcast facility is a dream come true. To see all that hard work come to fruition as we’re on the cusp of launching this is pretty amazing.” 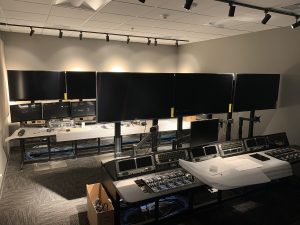 After pausing technical integration and commissioning on March 13, BeckTV’s work on the UFC Apex BOC resumed on April 27.

The new IP-based production facility, which is built around an Evertz EXE-VSR SMPTE 2110 IP core with maximum switching capacity of 46 Tbps, will allow UFC to produce live events from Apex in 4K and will also serve as a central hub to produce events remotely. After heading home during the lockdown, the BeckTV team returned to Vegas to restart integration on April 26.

“We were able to time it so that BeckTV came back when construction was done and [the facility] is 100% dust-free; there are no other construction trades working in the building,” says O’Toole. “So their team is extremely happy. They are practicing all the [social-distancing] guidelines, and there is a very limited group onsite.”

BeckTV had accomplished a lot prior to the shutdown on March 13, having installed all racks in the central equipment room, most of the production-control–room consoles and desks, and a large chunk of the wiring. However, work was shut down just before manufacturers were able to come in to commission equipment. 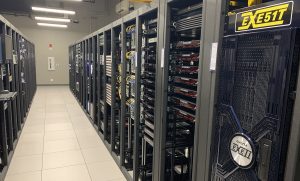 With integration restarted, Evertz has sent a rep from its L.A. office to Apex, and, in an arrangement unusual for the company, the technical team at its Burlington, ON, headquarter is remoting into the Vegas facility to help commission the IP router.

“It’s the new norm: not only are productions being done that way, but now commissioning is being done remotely as well,” says O’Toole. “Evertz is in for three weeks to get caught back up, and we’re working with our other manufacturers on commissioning now.”

According to O’Toole, UFC is targeting a midsummer launch for the broadcast-operations center, but the official timeline remains fluid as his team continues to work with vendors to commission equipment.

“It is fluid because we’re still waiting on the commissioning,” he says, “but we’re pressing for midsummer. That’s the goal.”

Although UFC had originally opted to build out the Apex BOC for the Contender Series, it appears that the facility may be hosting higher-profile events in the near future. UFC President Dana White has made it clear that, after UFC 249, which is being held in an undisclosed location in Florida this Saturday, UFC plans to hold all events at the Apex facility for the “foreseeable future.”

“We are looking very closely at having UFC events inside of Apex in a closed environment where no fans will be in attendance,” says O’Toole. “We are excited to be able to take further advantage of this amazing facility for more UFC productions.”