When the coronavirus pandemic forced the 2020 NFL Draft from an in-person event to a fully virtualized affair, there was one big question on Tim Tubito’s mind: How can the league engage fans? The NFL’s Director of Event Presentation and Content and his team went to work to try to recreate the “inner circle” of hard-core fans typically present in the front rows at the traditional NFL Draft. 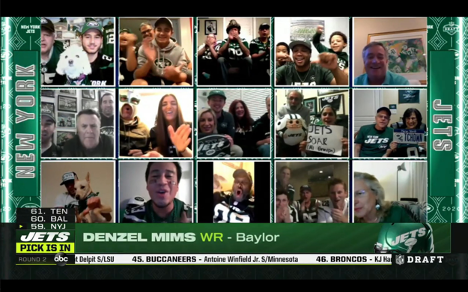 “The Draft in itself is one of our most fan-facing events we have,” he says. “It’s a very engaging event between the [onsite] activations and how the commissioner interacts with the fans. And our most hardcore season ticket holding fans are normally in that inner circle area right up front. So, first off, how do we bring those fans back in and make it special so they feel like a part of the event? Second, how do we bring that energy from the fans back into the broadcast? And third, the commissioner loves to interact with the fans, so how can we bring that energy into his basement and allow him engage with the fans?” 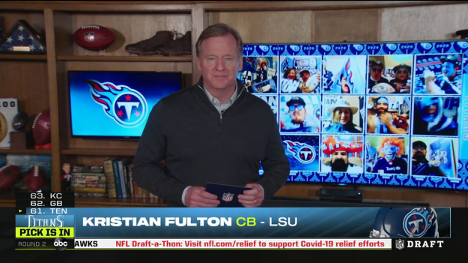 Tubito and company turned to The Famous Group (TFG) — which oversaw the groundbreaking NFL100 mixed-reality production at Super Bowl LIV — to design and execute a solution that could integrate hundreds of live fan feeds to create an “inner circle” digital mosaic displayed behind NFL Commissioner Roger Goodell for each team’s pick.

In order to pull it off, TFG deployed its own VIXI social entertainment/engagement technology and brought in Quince Imaging to provide the remote studio, custom control software, and automation to moderate and animate the fan digital feeds. In addition, LTN Global Communications provided the cloud infrastructure and cloud-video architecture to manage more than 1,000 fan feeds over the course of the Draft’s first two days.

Originally, the NFL had hoped to fully simulate having 30 fans (the number that would normally be in the inner circle for each team at a traditional Draft) integrated into the mosaic, but quickly realized that having that many boxes on a single display would not be possible. 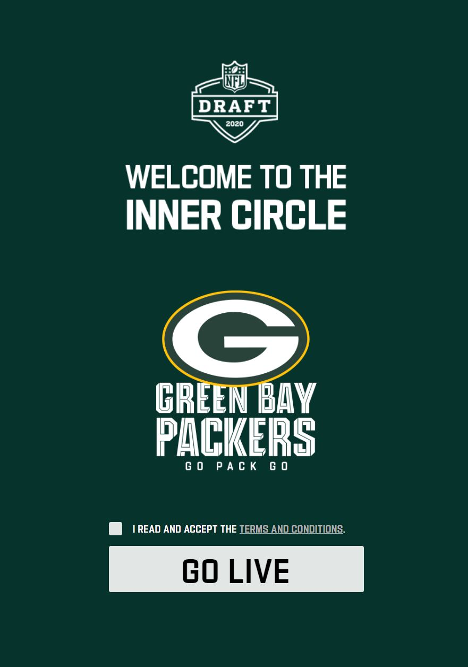 The final product was able to feature all 30 fans per team by separating them into 15 feeds per day on Day 1 and Day 2. Once this setup was finalized, the NFL Events team coordinated with each NFL club to select fans with some choosing season ticket holders, others selecting avid fans, and others holding contests.

“It takes a lot to wrangle a thousand fans for this, but it was one of the coolest things we ever did and it took truly a team effort,” says Tubito. “It ended up being a lot of fun and I think it was great for the teams to be able to reward their fans.”

LTN Global’s Live Video Cloud provided the backend infrastructure, enabling fans to seamlessly connect their video feed to the production chain while receiving audio and video return from producers. Within LTN Live Video Cloud, 32 WebRTC contribution URLs were created and those URLs were distributed to the fans representing each NFL team. LTN then organized those incoming feeds into “streamtags,” and, using LTN’s open API, Quince Imaging wrote API calls to mass route the incoming fan feeds to 15 different outputs. Those feeds were then grouped together using Ventuz to generate each team’s unique mosaic presented behind the commissioner.

“Taking in more than 600 streams was no easy feat. We took precautions and increased capacity for certain system components, but, generally speaking, our system is designed to handle large volumes of incoming sources from around the world,” says Joseph Hopkins, SVP Business & Corporate Development, LTN. “The project was unique [in terms of] the number of inputs, of course. We’ve never had a production this size before with so many feeds coming in from all over the country — and the world — [since] there were a couple contributors based in Europe as well.”

Live From the Commissioner’s Basement
The NFL Events team and its vendors held two full-day rehearsals leading up to the Draft to ensure reliable connectivity and help frame their shots. 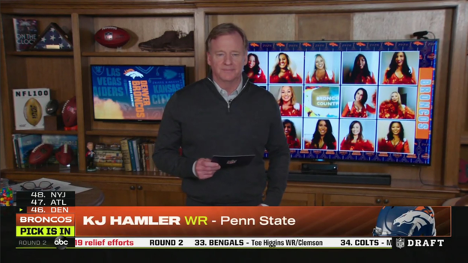 “Besides the massive challenge of working in a completely remote fashion, one of the biggest hurdles was managing over 1,000 fans who all have different equipment, cameras, and systems in their home that all need to work correctly,” says Jon Slusser, Partner/Owner, The Famous Group. “We had a team of people who worked with each team and their fans to make sure that they had support throughout the process. There were lots of long nights making sure that each fan could be part of this once in a lifetime virtual experience.” 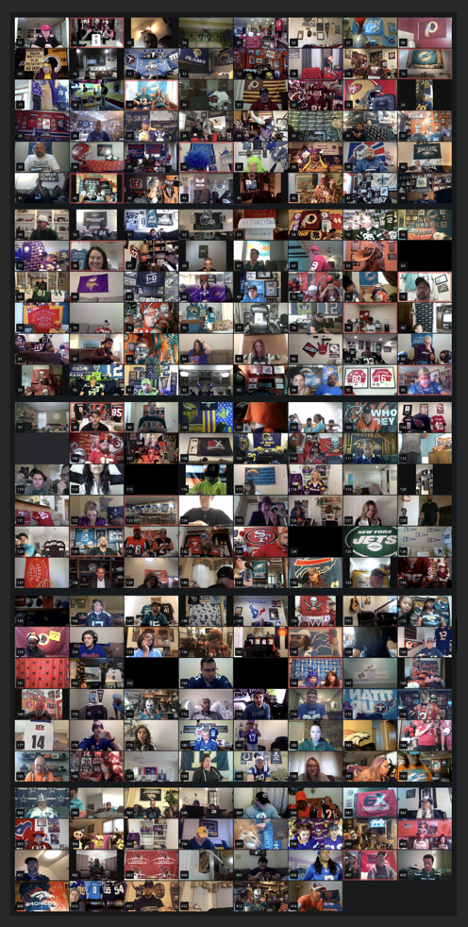 One hour prior to the start of the Draft each day, all fans dialed in and remained online for the duration of that day’s picks. Tubito was one of the few key personnel located at the commissioner’s house, operating from a workstation in the basement while respecting social distancing guidelines. Meanwhile a large group monitored and managed the feeds behind the scenes, including Famous Group producers, the NFL Events team and Club Business Development team, and a point of contact from each team. Security protocols were also put in place to ensure each team’s room was never compromised.

“This was a very unique project because we had over 50 people working across the country and working in over 50 different locations,” says Slusser. “So the technical video paths and the audio for internal communication took a long time to perfect. It’s a different way of working, but once we got the hang of it, was actually quite efficient.”

Roughly a minute and a half before a team’s pick was announced, the Inner Circle mosaic would go live on the monitor behind Goodell so the commissioner could interact with the fans prior to announcing the pick.

A Look Back: Inner Circle Proves to Be Key to Draft’s Success
As the highest-rated Draft of all time and the most-watched sporting event since the coronavirus pandemic essentially shut down the sports world in mid-March, this year’s virtual version of the NFL Draft has been deemed a success by the league and its broadcast partners. Tubito sees the Inner Circle fan integration as a key element in the success of the unique production. 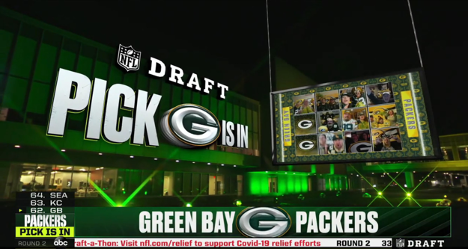 “This was, by far, the most unique [event] I’ve been a part of and we were really happy with it. We found a good rhythm and workflow and it turned out great,” says Tubito. “This is my 16th Draft overall, both from the club side [previously with the New York Jets] and the NFL side, and I’ve experienced everything from Radio City to the storms in Chicago to Nashville’s craziness and somehow this event takes on a life of its own and reinvents itself every single year.”

Slusser adds: “We were ecstatic about the results, not only because the system worked smoothly and it became a great part of the show, but, more importantly, because the fans were given a wonderful escape from reality in a time when they needed it most. The NFL’s vision for this project was amazing from the start and working with people like Tim Tubito and [NFL EVP Club Business and League Events] Peter O’Reilly was very inspiring. They are true leaders in the space.”

Hopkins adds: “Due to the challenges we’re all facing with Covid-19, we were very proud to be able to connect the fans to the Draft, and give viewers at home the best experience possible. Live sports are best when there is a crowd, for now if that crowd is stuck at home at least there is a way we can bring a high volume of fans to the event via their connected devices at home.”

Brandon Costa, Director of SVG Digital, contributed to this article.