Legends Behind the Lens: Sean McManus

With more than 50 years in the industry, one of modern sports TV's most influential executives has strong family roots 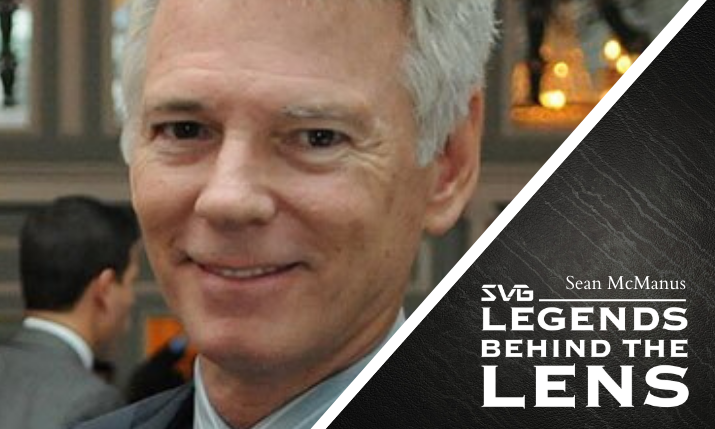 If a person is the company he keeps, it’s easy to understand why CBS Sports Chairman Sean McManus is being inducted into the Sports Broadcasting Hall of Fame. His mother, Margaret, and father, legendary broadcaster Jim McKay, instilled in him core values and ethics that have served him well personally and professionally. And then there were his professional mentors: from the start of his career as a production assistant at ABC Sports, a veritable who’s who of the greatest sports, news, and TV professionals of the past 50 years.

McManus’s journey into sports TV began when he was a youngster, spending summers traveling with his father and experiencing not only the world’s greatest sports events but also those that would make ABC’s Wide World of Sports such fascinating viewing week after week.

“I traveled a lot with my father to sporting events in the summer at a time when the men and women at ABC Sports were inventing sports TV with Wide World of Sports. And, by the time was 11 years old, I knew that was what I wanted to do for a living.”

By the time he was 15, Sean McManus was working on a freelance basis as a gopher, had worked his way into the production department, and was sure of what he wanted to do. But his parents insisted that he spend a summer interning with Solomon Brothers on Wall Street to at least open his eyes to other careers.

“I was bored,” he recalls. “By then, I was used to the world of sports TV production.”

McManus began his career in 1977 at ABC Sports as a production assistant and associate producer. Two years later, he joined two of his ABC mentors, Geoff Mason and Don Ohlmeyer, at NBC as associate producer assigned to the NFL, Wimbledon, the PGA Tour, and more. He then transitioned into a production/management position, where he had free rein.

“It was an ideal job,” McManus says. “I had a great run there, and I owe Geoff and Don a lot for that time. And it was the right thing to do because being at the same company as my father [legendary sportscaster Jim McKay] was a bit awkward.”

“He’s somebody that you are proud to have as a friend and a partner because he’s someone you know will never let you down. He’s that kind of guy.” – NFL commissioner Roger Goodell

At 27, McManus became the youngest vice president at NBC Sports, overseeing program planning and development. He was instrumental in the rights negotiations for the Olympics, the NFL, Wimbledon, the Orange Bowl, auto racing, and NCAA college basketball and held that role from 1982 to ’87.

“Sean received an uncompromising sense of passionate curiosity from his parents, Jim and Margaret, and that has served him well throughout his successful career,” says Mason. “The word no was never part of his vocabulary, and that is what we needed at NBC Sports at that time.”

In 1987, he took the next step in his career, becoming became SVP, U.S. television sales and programming, at Trans World International (TWI), the television division of International Management Group (IMG). The division was growing rapidly, and the move gave McManus a chance to round out his skill sets on the sales side of the industry. He also learned how to work with athletes like Arnold Palmer and Greg Norman and with sports entities like All England Lawn Tennis and Croquet Club and the Olympics.

“It was a good experience and a good step in accomplishing my ultimate goal, which was to be the president of a sports network,” says McManus. “And I went from working with men like Roone [Arledge], [ABC director] Chet [Forte], and Mason and ABC and NBC to work with [IMG’s] Mark McCormack and Barry Frank. It was really incredible.”

With an understanding of both the selling and the buying side of the industry, McManus also understands a lot about negotiating a deal: “If a deal isn’t good for both parties, it probably isn’t a good deal, and you need to leave a little on the table for the next round of negotiations. You can’t be afraid to do that.”

In 1996, he fulfilled his life-long dream of becoming the president of a network sports division.

Landing the job took a bit of kismet. McManus was outside the Post restaurant in midtown Manhattan when he ran into CBS TV Network President Peter Lund and his wife and some other CBS executives. “We spoke for about 30 minutes,” says McManus. “Peter later told me that, afterwards, he was talking to his wife about not knowing who to hire to be CBS Sports president and she said ‘What about that nice young man we were talking to on the sidewalk?’ Peter called me up, and I accepted the job without even knowing the salary.”

Since that day in 1996, McManus has called CBS Sports home. In 1998, he played a key role in the return of the NFL to CBS Sports, and the network has retained NFL rights ever since. He also worked closely with the NFL on the creation of Thursday Night Football in 2015.

“Getting the NFL back on CBS was a year-long process, and not a day went by when I didn’t work on some way to get it back,” he says. “I was fortunate enough to get the financial support that was key to getting the rights back.”

In 1999, he led CBS to sign an unprecedented landmark agreement with the NCAA, which extended the exclusive over-the-air broadcast rights and also covered rights to the internet, marketing and corporate sponsorship, merchandising, licensing, cable television, radio, satellite, digital, and home video for the NCAA Division I Men’s Basketball Championship until 2014. In 2010, that deal was renegotiated to bring Turner Sports on as a partner, and it now runs through 2032.

His tenure at CBS has plenty of highlights, including the launch of CBS Sports Network in 2008 and a five-year stint, from 2005 to ’10, as president of both CBS Sports and CBS News. Only McManus and the legendary Arledge have held the sports and news division titles simultaneously (Arledge was ABC president of news and sports from 1977 to ’86).

“Running CBS News was invigorating, thrilling, and very demanding and time-consuming, but we have a great team at CBS News. It was really a dream come true to get to work with the men and women there and have a role in such a prestigious organization,” says McManus. “They carved out a very successful image and took a position on hard news and the best original reporting they can do, and I am proud they are still doing well.”

Today, McManus is chairman of CBS Sports, a position he has held since 2011. He is also a strong believer in the power of broadcast TV.

“Part of the reason sports on broadcast TV are so high-profile and successful is, quite frankly, because they are on broadcast TV,” he says. “And now you are seeing some of the sports, like NASCAR, migrating back to network TV because of the power of broadcast TV.”