Sports-TV Production and the Return to Normalcy

Coverage of Bundesliga, PGA, and NASCAR action is unusual but still familiar

Last Thursday, the editorial team at SVG was debating whether it was a good idea to write an opinion piece about the upcoming weekend and the return of Bundesliga, professional golf, and NASCAR. It was, arguably, the most important weekend in the history of sports television — so important that we didn’t want to jinx it by writing how important it was.

So we waited until today.

Of course, the caveat of writing that the weekend went off without a hitch is that the hitch involves a virus that takes a few days to pop up. For now, though, the entire industry can celebrate a weekend of professional-sports action that was the culmination of weeks of planning, discussion, risk assessment, and more.

Herewith is one person’s assessment of the weekend’s action from the comfort of a living-room couch. 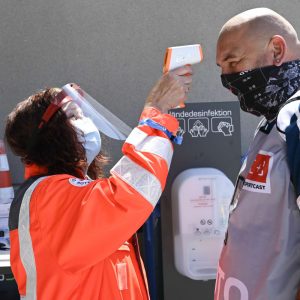 Temperature checks were required at all Bundesliga matches this past weekend.

The Bundesliga was first to be back in action on Saturday morning New York time, and it delivered record viewership in Germany, the UK, and the U.S. The return of team sports is a major challenge, and the Bundesliga and the league’s TV-production arm, Sportcast, took a large number of precautions in returning to action.

A couple of quick notes on the production: social distancing was enforced, masks were worn, and things like camera meetings were done over headsets. A full complement of cameras was deployed for all the matches, although some positions were altered to maintain social distancing.

Watching the coverage, one was immediately aware of the lack of cheering, and the action looked more like a scrimmage than an actual match. The sounds of players and coaches yelling in German reverberating in an empty stadium was odd at first, but, after a few minutes, the quality of the camera coverage captured the attention, because it was all there: replays, reaction shots, closeups, and challenges.

And, as the match progressed, something else became clear: although the temptation (and social-distancing guidelines) may ultimately require fewer cameras for U.S. sports events, what happened in Bundesliga made it clear that, when audio can’t tell the story, the burden falls on the images and camerawork.

Oh, and, for sports fans who loathe gratuitous crowd shots (guilty as charged), it was great to see so much focus on the field of play.

After Bundesliga provided hours of live team sports, we had Sunday’s action. 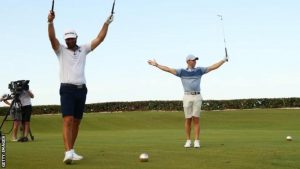 First, a confession: I love televised golf, so seeing four professional golfers take to a course to raise money (and carrying their bags like they were in college) was wonderful. Course coverage relied heavily on six handheld cameras (and bonded-cellular transmission), but aerial shots really made the difference. And the lack of a gallery and the noise of the crowd allowed viewers to be treated to running commentary from the players as to how to approach a shot, putt, or pitch.

It also proved out the use of bonded cellular on a golf course for live match coverage as well as new remote-production workflows. Studio host Mike Tirico was in Michigan, and the rest of the production team was at PGA TOUR Entertainment’s facility in St. Augustine, FL. For more details on the production, click here.

For auto-racing fans, there was NASCAR on Fox. The good news is, because the roar of the engines at a NASCAR race often drowns out the roar of the crowds when there were tens of thousands of fans on hand, the lack of fans had only a small impact on the viewing and listening experience. 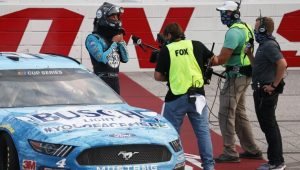 The Fox and NASCAR teams worked hard on social distancing, even during interviews.

What was most memorable about the NASCAR on Fox coverage actually had little to do with technology and more to do with the full-on embrace of social distancing and masks. Everyone at the track who was on camera wore a mask. Interviews were conducted with the drivers standing 6 ft. from the interviewed and the conversation captured via a microphone on a pole. In an age when leading by example can make a difference, it was great to see everyone doing their part to inspire behavior that makes action like this past weekend’s possible. For Fox perspective on the opening race, click here; for NASCAR’s perspective, click here.

Where do we go from here? NASCAR will rev up the engines again on Wednesday night. And, next weekend, golf fans will get their fill with Tiger Woods and Phil Mickelson playing alongside Peyton Manning and Tom Brady, and the Bundesliga will return to action in Germany.

Of course, things could go sideways, someone could get sick, and maybe an event doesn’t go off as planned. But, every day, the sports-TV–production community, the leagues, the teams, the athletes, and the venue professionals are working hard to solve countless challenges that, only two months ago, would have seemed ridiculous. Who would have guessed that sneeze guards would move from the catering buffet to the production areas?

I have always marveled at the ability of sports-TV production and engineering professionals to create a plan, document it, and then execute it at a high level. On top of that, they are able to turn that plan on a dime and move in a different direction. What happened this past weekend was the result of those skills, sharpened over years, if not decades, of professional experience.

This past weekend also showed the results of what can happen when not only the TV-production team but also the athletes, leagues, and venue personnel work together on a clear, disciplined, and focused plan. It was truly a team effort.

But it was nice, even if it only for 48 hours, to feel that there was normalcy in a world where normal has become the exception.