The largest videoboard in sports extends beyond the actual playing field

Many aspects of sports remain on hold, but, located amid the glitz and glamour of Hollywood, SoFi Stadium has completed installation of a videoboard that dwarfs the sign that proclaims the town’s name. At 2.2 million lb. and 80 million pixels, the 4K, dual-sided structure built by Samsung and HKS for one of the NFL’s newest venues is the largest LED display in sports. 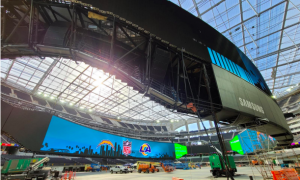 With 70,000 sq. ft. of LED display and 80 million pixels, this dual-sided videoboard is now the largest in sports.

“The Samsung LED technology represented in the videoboard at SoFi Stadium is unlike anything fans have ever experienced,” says Jason Gannon, managing director, SoFi Stadium and Hollywood Park. “The design and the board’s video and audio capabilities are the first of their kind in sports and will set a new precedent for the in-stadium experience.”

In the new home of the Los Angeles Rams and Chargers, the 70,000-sq.-ft. centerhung LED display hangs 122 ft. above the field of play. Because the venue is expected to seat more than 70,000 fans, the team at SoFi decided to expand the behemoth to 120 yards long — 1.2 times longer and 1.5 times wider than the turf below — with a panel height that ranges from 20 ft. to 40 ft. From any seat in the house, fans will be able to read the messaging and material displayed on the screen with the help of 4K technology and the largest graphics-control system in the history of sports.

If the sheer scale of the display isn’t enough, the dual-sided display allows patrons at the lower half of the bowl to enjoy content with the same clarity as those in the upper half.

“The monitor is designed to activate the entire seating bowl and is unprecedented in the world of sports and entertainment,” says Mark A. Williams, FAIA, principal, HKS. “The display is shaped to extend the field of play, allowing the 360-degree, two-sided board to provide every seat location and fan an unparalleled experience in content and viewing options. This design integration of technology and entertainment will elevate every visitor’s experience.” 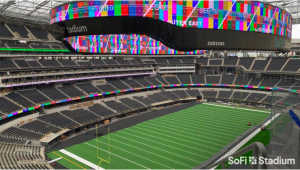 A rendering of the centerhung videoboard at SoFi Stadium in Hollywood, CA

On the audio side, the massive structure packs a hefty punch. Integrated by WJHW, the stadium’s JBL audio system has the wattage-power equivalence of 1,500 home-theater systems. Out of 4,500 speakers in the building, more than 260 are embedded in the videoboard. In addition, more than 7 miles of loudspeaker cable is wound throughout the interior.

“SoFi Stadium features cutting-edge display technology and serves as another example of Samsung’s commitment to changing the way fans interact with live sports,” says Harry Patz, senior VP/GM, Display Division, Samsung Electronics America. “We are proud to outfit the stadium with an iconic, first-of-its-kind, double-sided 4K LED display and additional Samsung digital signage technology to ensure that each fan has a unique experience every time they visit Hollywood Park. SoFi Stadium will instantly become one of the NFL’s most talked-about stadiums, and Samsung is honored to be a part of its history from the start.”

Barring changes to the NFL schedule, the first preseason game played at SoFi Stadium will pit the Rams vs. the New Orleans Saints on Friday, Aug. 14 at 10 p.m. ET. The Rams will also host the venue’s first regular-season game when the Dallas Cowboys come to town on Sunday, Sept. 13 at 8:20 p.m.