The fearless, transformative leader continues to push the industry into the future 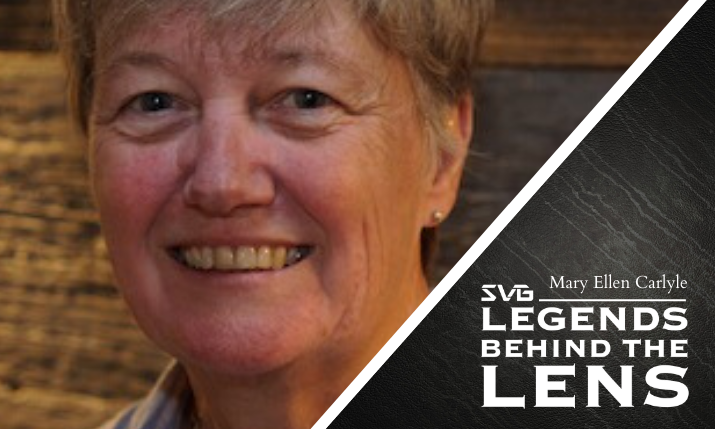 When your grandfather was a pioneer at CBC radio in Canada who tested microwave links through train tunnels and your father was an editor for the CBC, you already know that broadcasting is in your blood. The question for Mary Ellen Carlyle was whether blood would overcome her father’s advice.

“My dad said don’t get into [broadcasting],” she says. “But, in my second year [of college], I decided to take TV and film and ended up with a master’s in communications from the University of Windsor.”

Carlyle’s career started in 1985. She was a freelancer (she began at TSN by taking ESPN content from the U.S. and putting in blocks for Canadian commercials) and did everything from technician to master control and even TD. But it was when she got involved with scheduling that she found an affinity for remote operations.

“I was doing things like booking phones and satellites, and that was it,” she recalls.

In 1988, she found herself working for TSN at the 1988 Olympics (“I worked my ass off but learned so much”) —to this day a top career highlight. The next year, she became one of the original employees at Dome Productions and started on her road to the Sports Broadcasting Hall of Fame.

Launched as a sister company to TSN, Dome intended to use its two control rooms to edit episodics and, when the Toronto Blue Jays were playing, to have one room produce the Canadian feed and the other the American feed.

“After a couple of years,” says Carlyle, “we realized that didn’t work too well when the postproduction guys would put up a two-hour reel. We eventually moved postproduction into another building so we could do the live-event side.”

“A great leader is someone that people want to follow and that’s Mary Ellen. [Dome Productions] has a tremendous footprint in Canada and a very impressive footprint in the U.S.” – Jodi Markley, EVP, Content Operations & Creative Services, ESPN

In those early years, Dome Production produced the 81 Blue Jay home games, 10 CFL games, and a few other events. In 1992, it bought two mobile units from Challenger productions and has never looked back.

“If you had told me back then that we would go from 81 to 2,500 events, which is where we are now, I would have been in shock,” says Carlyle. “Now we have 18 trucks, consider ourselves forward thinkers, and have a great reputation worldwide. I had the chance to go from analog to digital, SD to HD, and then HD to 4K. The leap from HD to 4K has been nothing compared with going from SD to HD, which took a whole leap forward for the workflow.”

Carlyle says technology drives her forward, and she considers herself a “doer,” with both the good and bad that comes with that.

“It’s my biggest strength and weakness,” she says. “I will sometimes do something before I manage it. And I love to learn every day. If we hadn’t changed at Dome and expanded beyond two control rooms, I would not have stayed. But senior management wanted to change and look for the next new thing.”

Through everything there have been her husband, Brian, and children, Robbie (23) and Jamie (20).

“My mom passed away when I was 8, and when I had children, I said I was going be there for them and they were either going to come with me or I was going to take time off,” Carlyle says. “So I have balanced work and family really well and made the time. I’ve been very fortunate.”

Besides her family, she notes the team at Dome Productions. “It is 100% a team effort,” she says of her success. “The key is having people that want to work at Dome.”

Bell Media President Randy Lennox says that Carlyle has been a blazing a trail for the industry and women.

“We’re fortunate to get to work with her. We’re thrilled for Mary Ellen on this well-deserved recognition,” he adds. “She and her team consistently deliver superior services, ingenuity, and leadership that we rely on for so many of our productions. As a Canadian, I couldn’t be more proud to have her representing us in the Sports Broadcasting Hall of Fame.”

Stewart Johnston, president, media sales, marketing, TSN, describes Carlyle as one of the most passionate and empowering behind-the-scenes people in television. “She has had the benefit of great teachers and herself has become a great teacher, passing on her love of live production and devotion to the details to those who are lucky enough to work with her.”

Sportsnet President Bart Yabsley, who has worked with her for more than 20 years, calls her a pioneer of sports broadcasting.

“Right from the beginning,” he recalls, “it was obvious that her knowledge, talent, and passion for the business would set her apart. In her role leading Dome Productions, she has guided us through evolving broadcast technologies and helped position Sportsnet as an industry leader.”